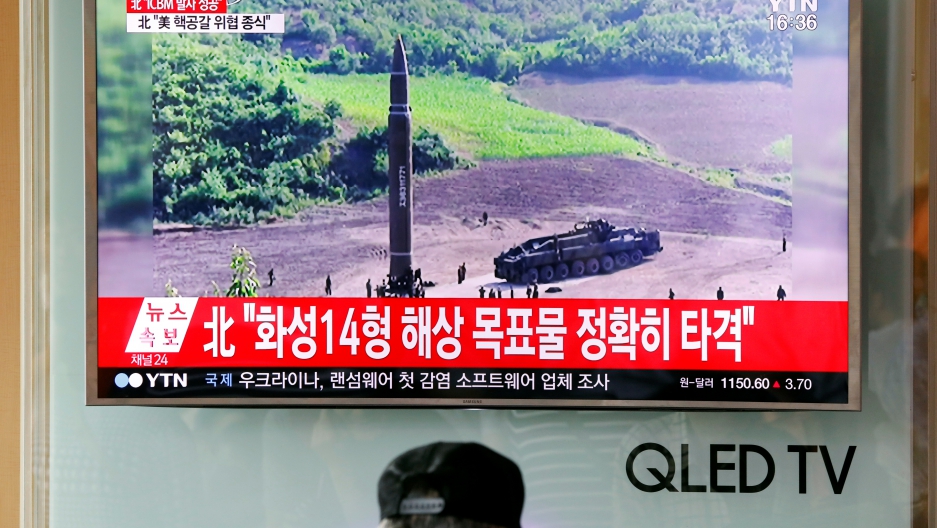 North Korea declared Tuesday that the country had finally achieved its dream of building an intercontinental ballistic missile, saying it would "fundamentally put an end to the US nuclear war threat and blackmail".

The Hwasong-14 ICBM reached an altitude of about 2,802 kilometres (1,741 miles) and flew 933 kilometres for 39 minutes before hitting a target area on the sea off the east coast, the North said.

Washington, Japan and South Korea gave similar figures, and US experts said the trajectory implied the device could reach Alaska.

Pyongyang is subject to multiple sets of United Nations sanctions over its atomic and missile programmes, which it says it needs to protect itself against a possible invasion.

It regularly issues bloodcurdling threats against its "imperialist enemy" Washington, and has long sought a rocket capable of delivering a warhead to the continental United States.

The progress has accelerated especially after young leader Kim Jong-un took power following the death of his father, longtime ruler Kim Jong-il, in 2011.

The latest launch potentially forces a recalculation of the threat it poses.

Here are five key questions on the issue.

While South Korean and US armies confirmed some details of Tuesday's launch, they did not immediately describe it as an ICBM.

But South Korean President Moon Jae-in said Seoul was analysing the result of the test "with a possibility of an ICBM in mind".

David Wright, of the Union of Concerned Scientists, wrote on the organization's blog that the available details suggested a range of 6,700 kilometres, which would allow it to "reach all of Alaska".

2.) What difference would a North Korean ICBM make?

The mere fact that the North has developed this sort of weapon would mark a significant milestone.

Pyongyang has staged five atomic tests — including two last year — with the regime stepping up efforts to produce a nuclear warhead small enough to fit into a missile.

With the North's threat growing significantly, possession of an ICBM would give Pyongyang key leverage to seek to squeeze more concessions from the US in potential future negotiations.

However it may still take some time before the North could reliably deploy multiple units of the missile, said Lee Chun-Keun, a researcher at Science and Technology Policy Institute in Seoul.

3.) What can the international community do?

The North is already under a thick layer of United Nations and bilateral sanctions over its past missile and nuclear tests conducted in violation of UN resolutions.

So the option for the UN to take further action may be limited — a point echoed by former US President Barack Obama on Monday.

Obama, speaking in a Seoul political forum, said the North was "already so isolated" from global commerce and finance that it was difficult for outside sanctions to have a real impact.

As such, many of the strategies the US used to bring other nations, most prominently Iran, to negotiating tables to dismantle nuclear weapons "are less available" on the North, he said.

One potential option would be punishing not only the North but also firms dealing with the country — so-called "secondary sanctions" that could hit firms in China, the North's top trading partner.

US President Donald Trump earlier dismissed the prospect of an ICBM from the North reaching the US mainland, tweeting "It won't happen!"

He took to Twitter to slam Kim Jong-un over the latest missile launch.

"Does this guy have anything better to do with his life?" he tweeted on Tuesday.

Tension has been high since Trump took power, especially after he suggested possible military option against the North.

But recently US officials have suggested such actions — which could see Seoul devastated by a Northern response — remain a last resort.

Talks of punishing Pyongyang over its provocations often boil down to what China can do as the North's economic lifeline — a point repeated by Trump on Tuesday.

"Perhaps China will put a heavy move on North Korea and end this nonsense once and for all!" he tweeted.

The North heavily relies on its powerful neighbor to buy its resources exports — a major source of hard currency — as well as other trade through the increasingly porous border.

Beijing made a rare gesture of pressure on the North earlier this year by banning coal imports from the country.

But it is unclear whether China would be willing to impose measures that could generate instability in the North.

Beijing's worst-case scenario is a collapse of the regime in Pyongyang, which could see an influx of refugees from the impoverished neighbour, and worse yet, US troops stationed on its border in a united Korea.