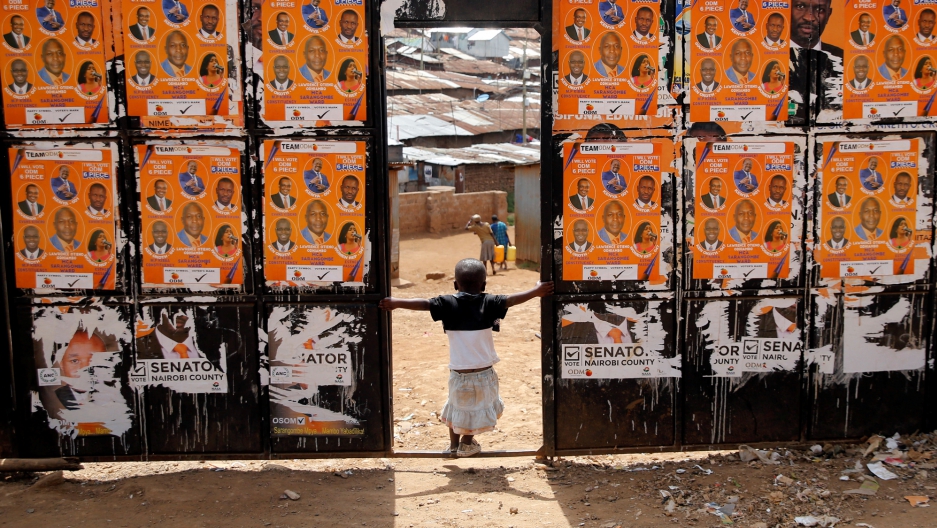 A child plays at the entrance of a polling station pasted with campaign posters ahead of the presidential election in the Kibera slums of Nairobi, Kenya.

In recent days, Nairobi's long-distance bus stations have seen long lines and in supermarkets, the aisles are cramped with shoppers stocking up on provisions.

In the run-up to Tuesday's elections the signs were clear: A tight race and a history of political violence meant many Kenyans were taking no chances, choosing to head for the sanctuary of their ethnic heartlands for the election period.

Some will vote there, where they are already registered, but others are trading their franchise for safety.

"You cannot predict how the situation will be," Ezekiel Odhiambo told AFP at a Nairobi bus terminal after putting his five daughters on a bus headed to the countryside.

Worries like these are common around election time in Kenya, exacerbated by memories of the bloody months after the disputed 2007 vote, when politically-motivated ethnic violence killed at least 1,100 people and displaced 600,000.

This year, security chiefs say there will be 180,000 officers on the streets — everyone from the police to the forest service — to ensure the vote is at least as peaceful as it was during Kenya's last election in 2013.

Still, people are "hoping for the best but preparing for the worst," said Peter Wairimu, a gas station attendant, where sales have dropped off in recent weeks as people have left town.

The two main candidates in this election are well-known to Kenyans.

Uhuru Kenyatta has been president since 2013 and is standing for a second term, while Raila Odinga is a longtime opposition leader who disputed his defeat in both 2007 and 2013.

In the run up to this week's vote, both candidates have refrained from making inflammatory speeches, observers say, perhaps a consequence of the International Criminal Court's now-abandoned indictment of Kenyatta and his running-mate William Ruto for their alleged roles in the 2007 bloodshed.

Yet people are nervous: Hate speech flyers and text messages have been circulating, both candidates have accused the other of underhanded campaign tactics and seem convinced that anything other than victory will be evidence of rigging.

Many Kenyans simply don't trust their politicians not to stir up trouble.

Editar Ochieng, a resident of the Nairobi slum Kibera, where clashes broke out in 2007, has sent her two daughters out of town for the duration of the elections.

Businesses have also taken precautions, with local newspapers reporting that employees are being advised to gather supplies and family members and keep the number of a doctor handy. 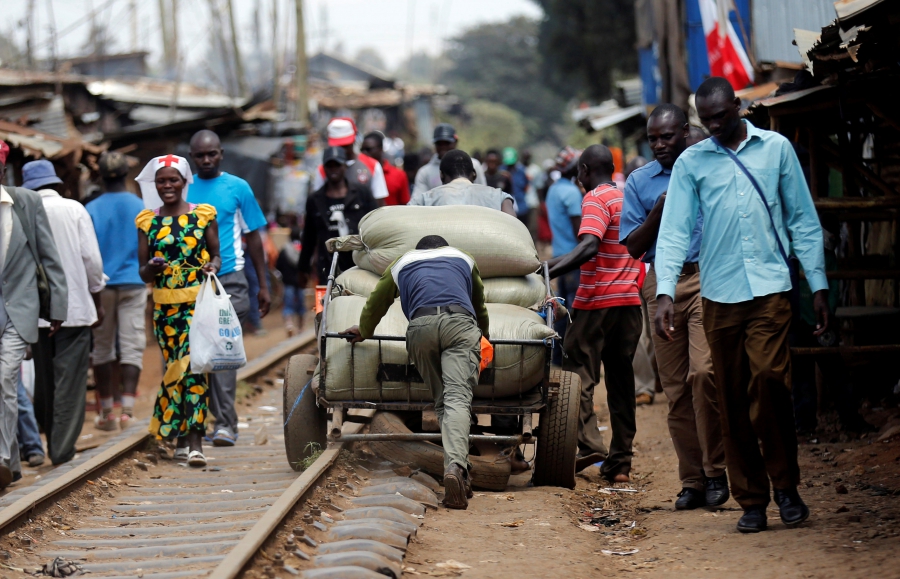 People push a hand cart loaded with maize sacks along the railway line ahead of the presidential election in Kibera slums of Nairobi, Kenya.

Kenya's police chief and interior ministry have tried to reassure Kenyans that they have nothing to fear, but people are hitting the road and stocking their pantries anyway.

Down at Nairobi's Machakos bus station, transport bosses have more than doubled fares on some routes, but that hasn't stopped a surge in customers who line up before dawn each morning for a bus to Kenya's west where Odinga is strongest.

Those travelers may represent votes that Odinga desperately needs to win what is probably the 72-year-old's last run at the presidency.

Recently, a politician from Odinga's National Super Alliance opposition coalition asked ticket agents at the station to check the voting card of travelers to make sure they were registered where they were traveling, said Lary Taja, an agent at Machakos.

"We inspect them at times such that, when we find the vote belongs here, we ask them to stay and vote and then travel home later," bus driver Chelule Julius said.

Despite the movement, plenty of Kenyans are staying put, confident that this election will go peacefully.

"I'm not worried," said Rajan. "The doomsayers will always be there."