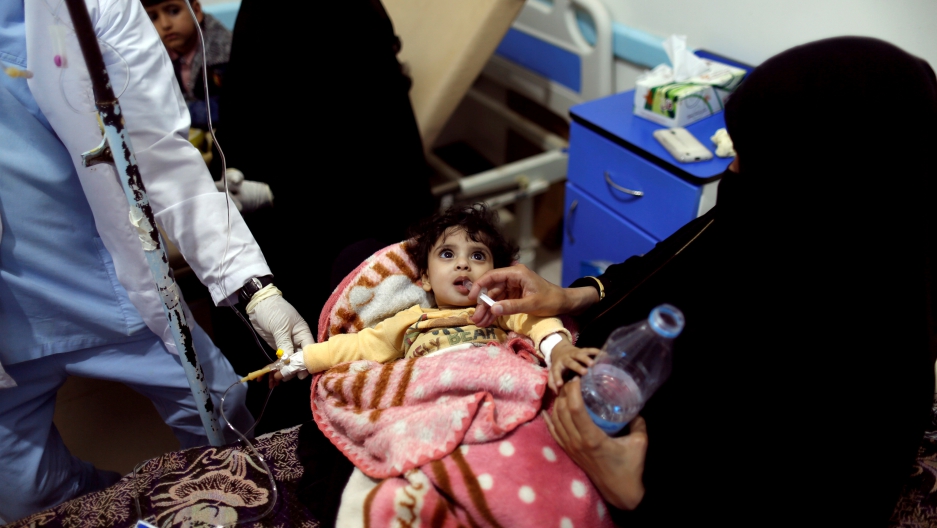 Woman gives her daughter rehydration fluid at a cholera treatment center in Sanaa.

Nurses and doctors have been working overtime in public hospitals — without pay — to keep pace with the cholera epidemic in Yemen, which has now infected an estimated 400,000 people across the country. An American documentarian recently took his film crew to a hospital in the rebel-held capital, Sanaa.

"What we saw in the nurses and doctors was that they were staying at it," says Martin Smith, whose short film for FRONTLINE on PBS, "Inside Yemen," was just released. "They tell us, 'If I get sick and nobody comes to work to take care of me, then I die. So I'm here to take care of the people who do have infections.'"

Cholera, a bacterial infection, causes diarrhea. And a severe case can kill a person within hours. The bacteria spreads easily through contaminated food and water. The current outbreak, which began in late April with a few hundred reports, is now the largest cholera epidemic ever recorded.

Related: Thousands in Yemen get sick in an entirely preventable cholera outbreak

The rapid spread of the disease has been enabled by Yemen's war. In the spring when Smith was filming, Robert Mardini, regional director of the International Committee of the Red Cross, told The World that cholera was just one symptom of the larger humanitarian crisis that has overtaken Yemen.

Efforts to combat the epidemic have been undermined by the unwillingness of warring parties to pull back from fighting. A mission by the World Health Organization to vaccinate Yemenis to slow the infection rate was called off. WHO spokesman Christian Lindmeier told The New York Times, "You can’t plan a campaign like you would do in a normal country.” Battle lines get in the way.

Donor countries have been sending medical aid to Yemen, among them Saudi Arabia, the United Arab Emirates and Kuwait. Ironically, these same countries are spending lavishly on a bombing campaign that is partly responsible for destroying Yemen's medical infrastructure.

"All this is a direct consequence of a conflict which is entangled, with no solution in sight," Mardini said. "And the basic rules of war are not respected by parties to the conflict."

Doctors and nurses don't have time to discuss the politics of Yemen's conflict.

"The people that we talked to weren't particularly taking sides in the war," says Smith. "They simply felt that they were caught in the middle between the Houthi rebels and the Saudi bombing campaign. But they do know where the bombs are coming from," he says. "The weapons are coming from the United States or from the UK. So when we were there there was a big rally being held: Say no to US terrorism."

#NoToUSTerrorismOnYemen All these crowds went out to say no to US terrorism on Yemen pic.twitter.com/YzE0sSWLEI

"Americans may not know that the United States is engaged in a war in Yemen," adds Smith, "but the people of Yemen know."

Since the bombing campaign began on March 26, 2015, Yemen's hospitals and clinics have been frequently targeted. More than half of the country's health facilities have been damaged or destroyed by the conflict. Those that remain open are stressed.

Related: Survival is what Yemenis think about every day

Smith's camera shows Yemen's crippled medical system up close as health workers struggle to keep up with the rush of new patients.

"They were having to release patients before they were really healthy because they had to make room for those that were in worse condition," he recalls. "They were running out of medical supplies, running out of beds."

On July 25, the World Health Organization said cholera's spread is slowing in Yemen and may have reached its peak. But hundreds of thousands more Yemenis will likely be infected before the epidemic is over.

The strain on medical staff in public hospitals will continue. Like tens of thousands of other Yemeni government employees, doctors and nurses have not seen a monthly paycheck since September 2016.