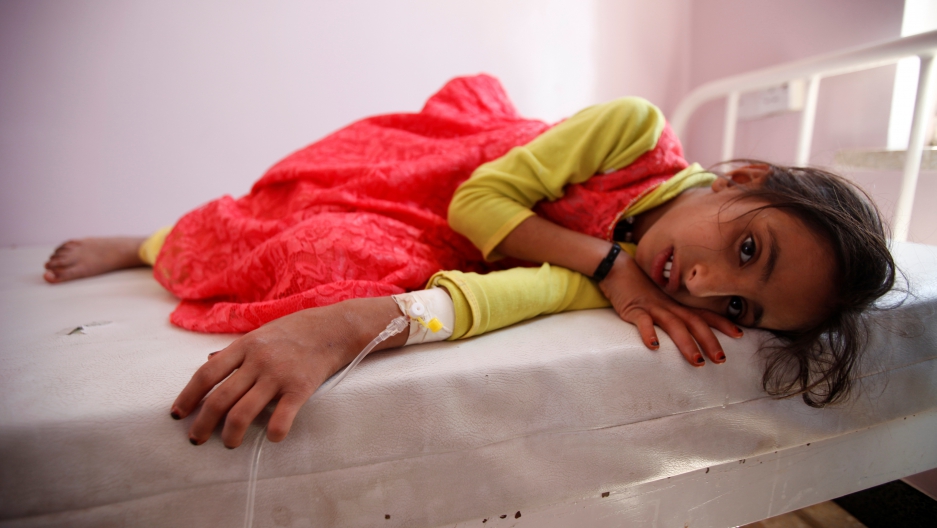 On Oct. 11, 2016, a girl lies on a bed at a hospital in Sanaa where she is receiving treatment for cholera. The May 2017 outbreak is more widespread.

Cholera is spreading rapidly across Yemen just ahead of President Donald Trump's trip to its northern neighbor, Saudi Arabia. Aid groups say Yemen's medical system, ruined by the war, needs a break from the fighting that Saudi Arabia — and the United States — have enabled.

In April, cholera was just one of many infectious diseases doctors were treating in parts of northern Yemen. Then it began to spread.

"We had seen that first day, four cases arriving in our hospital. And then the next day, four cases. But the third day — 25," says Ghassan Abu Chaar, head of the medical mission in Yemen for Doctors Without Borders, also known as Médecins Sans Frontières (MSF). "And since then, the numbers have been increasing."

By May 9, the World Health Organization said that 2,301 cases of cholera had been recorded in the current outbreak, which began on April 27. By Friday, May 19, the WHO estimated that 23,400 people had become infected. The number of infections increased tenfold in the space of ten days.

Yemen could have as many as 300,000 cases of cholera within six months, the WHO's Nevio Zagaria told reporters on Friday.

Nearly 250 people have died from cholera in Yemen in the current outbreak.

According to Marie-Claire Feghali of the International Committee for the Red Cross (ICRC), the crisis looks worst in the Yemeni capital, Sanaa, where hospitals are unable to keep pace with new patients.

"Up to four people share one hospital bed because there [is] no place to accommodate them," she says.

Feghali reports that this week, some patients, unable to receive treatment even in packed hospital corridors, had to be treated outside. Some patients were put on IV drips while seated in parked cars. “This is how bad the situation is now," she says.

"Yes of course, I'm really scared, I'm freaking out," says Rabee Odah. The 25-year-old English teacher left the capital to avoid infection, choosing to stay in his family's village, Alahjer. But even in rural Yemen, cholera is present.

"In my village, I have heard one woman got the virus. She is pregnant," Odah says. "But today, her condition stabilized."

The World Health Organization says that cholera cases are being reported all across Yemen. Suha Almujahed, a young humanitarian worker, says people have been sick with cholera in her city, Taiz, in central Yemen. But it's nothing like what's going on in the capital.

On the southern coast, Aden resident Nadeem Salmeen tweeted this notice from Yemen's Ministry of Health. It reads, "If you have diarrhea with a white color and without colic, as well as a spasm without nausea, go to hospital."

Salmeen saw the impact of cholera firsthand in 2015 in his city. Aden, then at the center of fighting between northern rebels and local resistance fighters, had not collected its garbage for weeks.

"The situation was very bad," recalls Salmeen. "And many citizens stopped eating outside the house to avoid getting sick."

Cholera, a waterborne bacterial disease, can be readily treated with antibiotics and hydration. But medical treatment is out of reach for many Yemenis.

Yemenis search through piles of rubbish lining a road in Sanaa after sanitation workers went on strike over weeks of unpaid wages pic.twitter.com/Tejkgu0OxZ

Since March 2015, when Saudi Arabia backed one side of Yemen's civil war, half of the nation's hospitals have been either destroyed by Saudi airstrikes, occupied by rebel forces, or shut down because there are no medical personnel to staff them.

A naval blockade — enforced by the Saudis with US help — slows the delivery of aid shipments to Yemeni ports.

A proposed invasion of the country's main seaport and cargo terminal has caused most groups to reroute aid shipments to ports farther from Sanaa. As a consequence, a convoy of trucks carrying food, fuel and medical supplies may have to pass through 100 military checkpoints to reach the capital.

"The roads are blocked, yes," says Feghali. "Because there is ongoing fighting, and then because not every party will accept that assistance will go to the party that they are fighting."

Humanitarian organizations working in Yemen, such as the ICRC and MSF, must retain their neutrality as they seek access to parts of the country controlled by one warring group or another.

"No pointing fingers," says Feghali. "The problem is the responsibility of everyone to respect the international humanitarian law that stipulates that humanitarian assistance should go to everywhere and to everyone who is in need of it."

Another impediment in Yemen’s health care system is the nation's struggling economy, which has become politicized in recent months.

In 2016, the exiled president, Abd-Rabbu Mansour Hadi, relocated the country's Central Bank, preventing the rebel government in Sanaa from accessing the nation's cash reserves. Since then, many govenment employees have not seen a paycheck.

"When the garbage collectors went on strike for 10 days for not getting paid, the whole capital was full of trash, and the stench was unbearable," says Edrees Alshami, an engineer who lives in the capital.

Alshami says the underfunding of Yemen's central government plus the Saudi-imposed sea blockade, combine to make life miserable for Yemenis, especially if they're ill.

Houthis claim Cholera is a US bio attack on #Yemen and plastering Sana'a streets with message. Seriously, how dumb & convoluted can you be. pic.twitter.com/q6kcq1FMbn

The first photo reads, "Cholera sickness is an American gift from Trump before he visits Saudi Arabia."

"Medicine is scarce in the city, and prices are doubled and sometimes tripled," he says. "When [you] get sick, either you don’t have the money for treatment or the hospital is too crowded to accept any new patients."

Abu Chaar, who is head of the Yemen mission for MSF, agrees that Yemen's economic woes undermine public health.

"Since the salaries are not paid since September 2016 for all health workers — doctors, nurses, paramedics — a lot of the health professionals have left their work in the hospitals of the Ministry of Health," he says. "So many of the health structures have stopped working."

Marie-Claire Feghali of the ICRC sees more trouble ahead for Yemen.

"If another outbreak takes place, God forbid, a month from now, the situation will be worse," says Feghali.

"In two or three months starts the malaria season,” observes Abu Chaar. "As medical professionals in Yemen, we ask, always, for access to health care for all the population in Yemen to be guaranteed, to be safe. Warring parties should stop attacking civilians, health structures, the health system in total."

When President Trump visits Saudi Arabia at the end of this week, Yemenis will be watching. After all, American military support helps enable the war in Yemen. US support for the Saudi-led fight there includes billions of dollars in jets, smart bombs and midair refueling services.

NOTE: This article was updated Friday with fresh statistics from WHO Yemen.