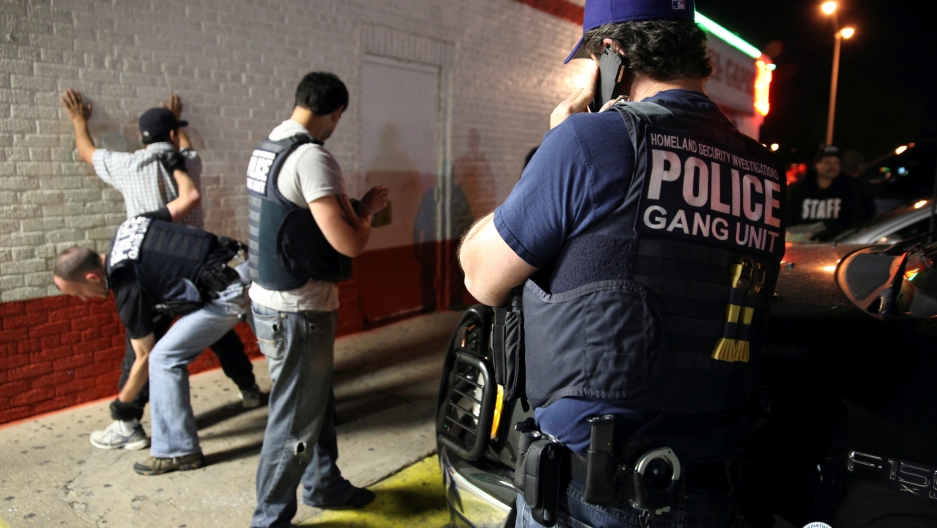 Federal agents with US Immigration and Customs Enforcement's Homeland Security Investigations detain a man in this handout picture taken in Dallas on March 30, 2014. An ICE memo revealed that the agency will conduct raids this week targeting teenage suspect gang members.

Most Sunday evenings in the rural South Florida town of Homestead are quiet. Young people congregate at a handful of restaurants that sell Salvadoran pupusas, Honduran baleadas and Mexican enchiladas.

They stop for ice cream and chat on the sidewalks, or sit on the numerous park benches that populate the cement square outside City Hall. Sometimes their parents or elders usher them into one of the town’s Pentecostal churches.

Not everyone here has heard news about the potential for immigration raids targeting teenagers suspected of being in gangs. And those who have, for the most part, don’t want to talk about it.

One American-born teen working behind the counter of a mostly-Mexican supermarket agrees to talk, provided she is identified only as “Katie.” The 17-year-old scoffs with irritation when she hears about the raids. Her own father was deported to Guatemala when she was 7, she says, and she knows plenty of people who could be profiled even if they aren’t gang members.

"What do they think they're accomplishing by doing that?" she asks under her breath as two of her teenage male Latino co-workers bag groceries at neighboring registers. "Most of us are here to work hard. Just because you see kids with tattoos hanging out in parks or at the movies, it doesn't mean they're going to jump you. Authorities should put their efforts into arresting the people who really push all this criminal business.”

Reuters broke the news of the raid Friday evening, after obtaining an internal ICE memo stating that operation would run from Sunday to Wednesday and target 16- and 17-year-olds. The memo said immigration agents would identify suspected gang members who meet two or more criteria, including having gang-related tattoos, clothing associated with gang culture, or if they spend time in areas frequented by gangs. They would also suspect someone if a “reliable source” identified them as a gang member.

The Commercial Appeal in Memphis, Tennessee, is reporting that ICE agents arrested 15 people in what they call a "surge" that targeted "family units, adults who entered the US as unaccompanied alien children (UAC), and UACs who are at least 16 years old and have criminal histories and/or suspected gang ties." The action targeted individuals but also involved questioning and arresting other people in the area.

Social workers who specialize in gang rehabilitation and prevention and child and immigrant lawyers share Katie’s concerns about the criteria.

“There’s a lot of different ways to track an individual. This could be better organized,” said Daniel “Nane” Alejandrez, founder of the grassroots gang intervention program Barrios Unidos. Now in its 40th year, the organization is made up almost entirely of former and inactive Latino gang members, and it has outreach chapters all across the country.

Alejandrez sees the gang raid as a front to conduct a massive immigration sweep.

“Violence is violence, and we stand against it whether it comes from the government or someone going down the street assaulting people,” he said. “But they hype this up. You enter a home and maybe one was associated with the gang a long time ago, and you find three or four undocumented so you wind up taking them all.”

“Based on what are we deciding that people are suspected gang members and not people who are in need of protection under international law?” asked Jeanne Rikkers, an American human rights worker who has spent more than 20 years working on violence, security and youth development issues in El Salvador. She is currently the San Salvador-based program director for the Cristosal Center for Research and Learning in Syracuse, New York.

For her, this campaign is not unlike hard-handed policies that failed to curtail violence in El Salvador in the early 2000s. Under the Mano Dura policy, membership in a gang was considered a criminal offense, as were gang-affiliated tattoos. Today, Rikkers said, El Salvador’s gang activity is as intense as ever, but one will be hard-pressed to find youth who actually look like gang members because they simply don’t mark themselves the way they used to.

“If your mission is to expand the gang, then you’re clearly not going to get yourself caught,” said Rikkers.

However, she wrote, Homeland Security Secretary John Kelly has made clear that “ICE will no longer exempt classes or categories of removable aliens from potential enforcement. All of those in violation of the immigration laws may be subject to arrest, detention, and if found removable by final order, removal from the United States.”

Jennifer Anzardo Valdes, director of the Children’s Legal Program in Miami, called the idea of arresting minors based on suspicion of gang membership “troubling” because it only increases fear in an already traumatized migrant community.

In most cases, gang membership itself is not a crime, however in 2012, the US Treasury Department named the transnational gang MS-13, originating mainly with members of Salvadoran descent, a criminal organization. And while historically, youth in gangs like MS-13 went through initiation rites to join, these days youth are often forced to join or face violent reprisal, including death, if they refuse.

More: Only 10 to 23 percent of Central Americans who apply are granted asylum

Also: A brother and sister flee gang violence in El Salvador and start over in the US

During his 2016 campaign, President Donald Trump vowed to crack down on illegal immigration and to track the so-called “bad hombres” he blamed for trafficking drugs and humans across along the US-Mexico border. In a May 15 speech honoring slain law enforcement officers in Washington, DC, he made a more direct warning: “MS-13 is going to be gone from our streets very soon,” he said.

While members of gangs like MS-13 have committed some heinous crimes, social workers say they find no evidence that most gang-related crimes are being committed by immigrants. Plus, most of these gangs started in America, not abroad.

In May, ICE announced that it had arrested 1,378 people over six weeks in a “nationwide gang operation.” Over 1,000, the agency said, were suspected gang members and about the same number were US citizens.

The MS-13 gang, or Mara Salvatrucha, and its main rival, the 18th Street gang, began in Los Angeles in the 1980s when hundreds of thousands of refugees fleeing civil conflict in El Salvador and neighboring Guatemala and Honduras came looking for safe haven. Some young refugees, many of whom had already witnessed violence, joined gangs to fit in or protect themselves in low-income neighborhoods where gang life was already a survival mechanism for marginalized youth.

As those conflicts in Central America came to a close in the 1990s, US authorities began deporting gang members with serious criminal records. Those actions have affected both Central America and the US ever since, although Central America has suffered the brunt of it. According to the United Nation Office on Drugs and Crime, violence in the Triangle (El Salvador and its two neighboring countries) is staggering. In 2014, Honduras and El Salvador had the highest homicide rates in the world, at 75 and 64 deaths per 100,000 people. Guatemala is in the top ten most homicidal countries, with 31 deaths per 100,000 people.

Immigrant rights advocates say this violence is what’s pushing many Central Americans — most notably children — to come to the US in search of safety. Between 2009 and 2015, President Barack Obama’s administration deported 2.5 million people, the highest number of deportations by any president in US history, according to data from the Department of Homeland Security. However, he allowed most children to stay, arresting only those known to have committed serious crimes.

Barrios Unidos leaders say that children like these need a safe haven. Poverty, migration and deportation wreak havoc on their home lives and make it easier for them to fall into gangs.

“We gotta find a better way to deal with violence and economic chokeholds on a lot of these communities that folks are coming from,” said the founder, Alejandrez.

As with immigration raids past, Alejandrez said Barrios Unidos began preparing as soon as they got the news on Friday. They had lawyers on call, a Mexican flag raised on their rooftop in Santa Cruz, California, to signal caution to the community, and the offices readied for anyone seeking temporary refuge. Alejandrez said the government puts more money into incarceration and deportation efforts than into youth violence prevention and rehabilitation.

“We think we’re getting rid of the problem, but we pay for that,“ he said. "Never has there been enough resources to help young people. They might have a good program here and there, but there are thousands of young people falling through the cracks.”