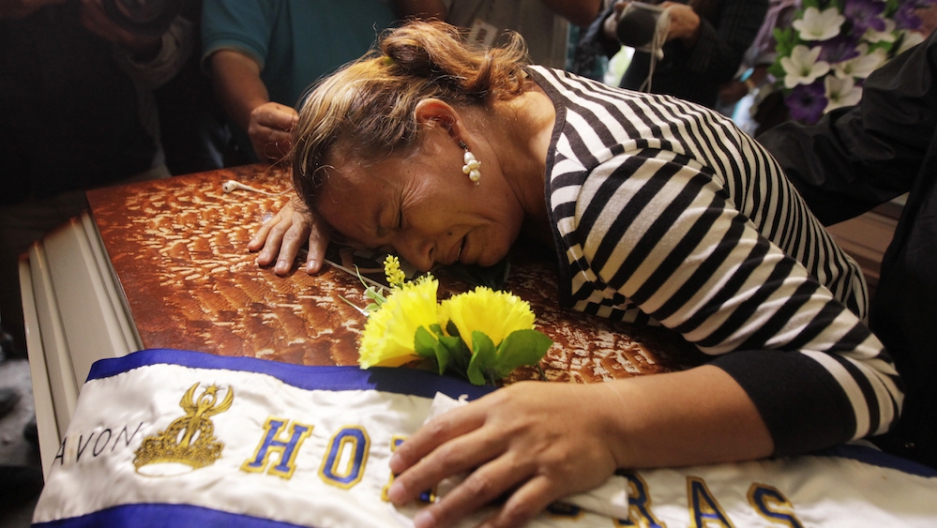 Teresa Munoz mourns over the coffin of her daughter Maria Jose Alvarado during a wake for Maria Jose and her sister Sofia outside their home in Santa Barbara, November 20, 2014. The Honduran beauty queen has been found shot dead in a suspected crime of passion just days before she was due to compete in the Miss World pageant in London, police said.

The mass shootings in the US continue to put a spotlight to gun violence and its high homicide rate compared to other developed countries. But the US is not even in the top 100 for annual homicide rates when compared to the rest of the world.

From the interactive map above, most of the top countries with the highest homicide rates are in Africa and Latin America. The homicide rates, defined as the number of deaths by homicide per 100,000 people, of the top 20 countries are showed in the chart below. The US was ranked 107 out of 218 countries, according to data from the United Nations Office on Drugs and Crime.

The issue of gun control took center stage once again after the Orlando massacre with advocates of more gun control arguing that stricter gun control would help to reduce the number of homicides in the US.

The Global Study of Homicide 2013 report by the United Nations Office on Drugs and Crime found that firearms are the most widely used weapons in homicides committed globally in 2012. However, “not all high homicide areas are associated with a high prevalence of firearm homicide.”

Data in the report shows that although murders committed with guns make up a huge portion of the total homicides in the Americas, including the US, some other regions with higher homicide rates, such as Eastern Europe and Southern Africa, have a relatively low share of homicides by guns.

Similarly, some regions have lower homicide rates but a higher portion of homicides committed by guns like Southern Europe and Northern Africa.

“This seems to confirm that a complex mixture of factors influences homicide levels, the homicide mechanism being only one of many elements that combine to determine homicide levels and trends,” the report concluded.

Several countries in Central America like Honduras, El Salvador and Guatemala top the list of homicides in the world. The heightening violence there has forced people to flee their homes and many end up as undocumented migrants in the US.

To stop their children from being recruited by gangs, some parents uproot the whole family and pay smugglers to move to the US. Some choose to send their children to the US, unaccompanied. In a town in El Salvador, the violence has even created a booming coffin-making business.

To put the numbers in perspective, there were 17.4 road traffic deaths for every 100,000 people in Honduras, while the number of murder victims was 74.6 in 2014, more than four times higher. According to a local news site, a total of 6,640 murders happened in El Salvador in 2015, while mass killings in Paris, Brussels and Orlando, combined took 211 lives.

Youth have been the biggest casualty in such violence. The 15-29 and 30-44 age groups account for the vast majority of homicides, but in South America and Central America, the homicide rate for male victims aged 15-29 is more than four times the global average, probably due to higher levels of gang-related homicide, according to the report.