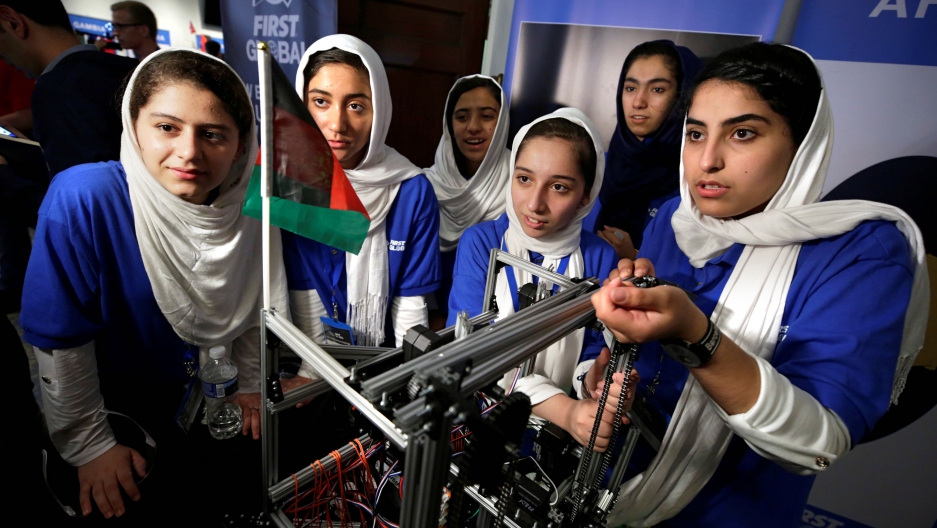 The all-girl team from Afghanistan prepares to compete in the first international robot Olympics on July 17, 2017, in Washington. The girls were originally denied entry into the US but were able to participate after President Donald Trump intervened.

Yuri Gripas/Reuters/TPX Images of the Day

Their robot — dubbed Better Idea of Afghan Girls — didn’t nab a gold medal. Even so, the six teenage girls who had traveled from Afghanistan to Washington became celebrities at the three-day First Global Challenge, an international robotics competition that wrapped up Tuesday.

The young robot-makers from Herat, the third-largest city in Afghanistan, gained international attention after US officials twice denied their visa applications. The girls finally were granted entry after President Donald Trump and members of Congress intervened following public outcry.

"Two days before our second interview in the American Embassy in Kabul, a suicide bombing struck around the US Embassy, and our family told us, ‘You should not go,’” said 16-year-old Rodaba Noori. “They were worried about security but we cried and we persisted, asking them to let us go to embassy.

“We thought the US has a good relationship with our country and were shocked when they rejected us."

Related: Afghanistan's all-girl robotics team can't get visas to come to the US

But the girls were undeterred, deciding that they would attend the competition via Skype.

“We wanted to show the Afghanistan flag in the competition” — to show Afghan girls can make robots, Noori said.

They got that chance to show the flag in person — as the flag was affixed to their robot during the contest — but making it that far was no small feat. And not just because of the visa trouble.

Early on, the team’s package of equipment for building the robot, which came from First Global, was delayed by customs in Afghanistan, said the girls' mentor, Alireza Mehraban, an Afghan software engineer.

“Other teams had four months [to build their robots],” he said, while the Afghan girls had to put theirs together in just two weeks. “The competition team emailed us and told us we could not make the robot with this little time, but we did.”

At the DAR Constitution Hall, the students and their robot competed against teams from over 160 countries.

The Afghan girls were singled out a number of times at the "Robotics Olympics" — for their sheer determination.

On Tuesday, before the official rounds got underway, the six Afghan teenagers were paired with the team from the United States and four other all-girl teams to compete in a demonstration match for first daughter and presidential adviser Ivanka Trump.

“For many of you who have traveled great lengths to be here, we welcome you,” Ivanka said, turning to smile at the six Afghan girls. “It’s a privilege and an honor to have you all with us.”

Ivanka shook hands with the teenagers and posed for pictures before she left.

During the competition, the robots had to pick up blue or orange balls and separate them into different containers. The machine that collected the most balls won.

In the fifth round, misfortune struck for the Afghan team. A technical glitch caused their robot to break, and the team came out of the round empty-handed.

But the team members weren’t discouraged, feeling that they had gained much from the experience.

“We want to open the first tech school in our country and make some robots that serve our people,” she said. “It is our dream."

"I want to say thank you to Sen. [Bernie] Sanders, Congress and the president. Also, the American people who share our story and support us,” said 15-year-old Kawsar Roshan.

Yasimin Yasinzada, 15, said this week’s competition is part of a larger goal for herself and her teammates. “We want to open the first tech school in our country and make some robots that serve our people,” she said. “It is our dream.”

Elaha Mahboob of the Digital Citizen Fund that sponsored the Afghan robotics team, said in a phone interview that education and technology can improve the lives of Afghan girls and women.

"Learning about robotics and solving a problem gives them the feeling that they can do something much greater and realize their talent and power."

“In conservative societies such as Afghanistan, usually the life of a girl is defined by their families and the community, staying at home and raising children with few prospects for gainful employment or brighter future,” Mahboob said.

"Learning about robotics and solving a problem gives them the feeling that they can do something much greater and realize their talent and power."

That came through in the contest, where the Afghan girls received silver medals for both the Rajaâ Cherkaoui El Moursli Award for Courageous Achievement and the Francisco Jose de Caldas Award for Sustainable Excellence.

After the awards ceremony on Tuesday night, the girls met with Afghanistan Ambassador Hamdullah Mohib, and they will spend several days exploring Washington, as well, before heading home.

And hopefully, now, lots of people have a better idea of what Afghan girls can do — especially these six.

This story was produced by a Washington Program reporter from Northwestern University's Medill School of Journalism.