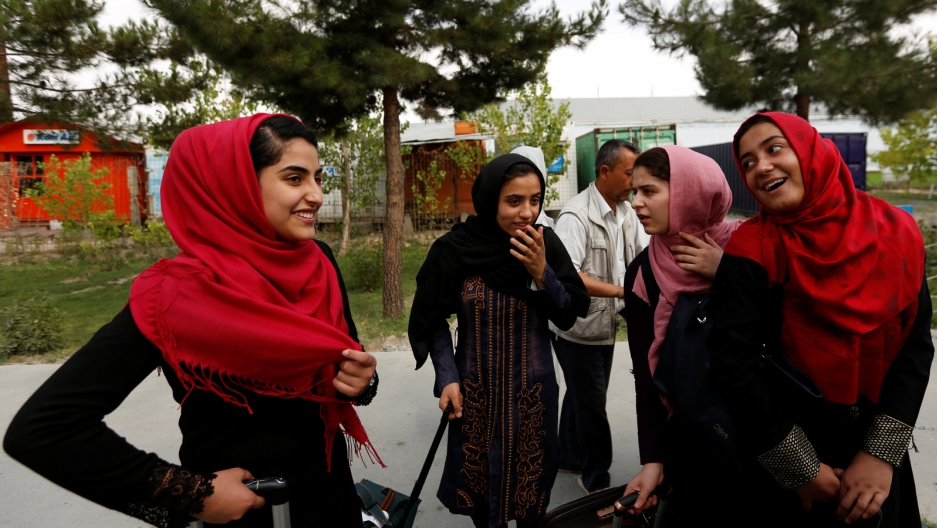 Members of Afghan robotics girls team chat with each others as they arrive to receive their visas from the US embassy in Kabul, Afghanistan, on July 13, 2017.

A team of Afghan girls who had been denied visas to attend a Washington robotics competition spoke of Donald Trump's support Thursday after US authorities changed course and allowed them to come.

Read our previous reporting on this story, here, and watch a video showing interviews with the girls.

Clutching Afghan flags and waving to photographers, the schoolgirls boarded a plane in Herat in western Afghanistan Thursday afternoon to begin the long journey to Washington, where they will become the first robotics team to represent the war-torn country overseas.

US authorities had originally refused access to schoolchildren from a number of Muslim-majority nations to participate in the science contest, decisions that followed implementation of stricter visa policies under Trump.

But the US president urged a reversal following public outcry over the Afghan girls' inability to attend the event, according to US media, with the decision announced Wednesday.

"The president of the United States and the people of America supported us in this case, which shows that they have not forgotten us," one competitor, Yasamin Yasinzadah told AFP at the airport in Herat.

"We want to take the message of peace to America and convey that Afghanistan is not only the country of war, and there are girls who chase their dreams in robots and education," added Fatema Qaderyan.

Organizer Ali Reza Mehraban of the Digital Citizen Foundation said the decision meant "supporting peace and women of Afghanistan, who have been deprived of everything for the past 40 years."

President of organizers First Global, Joe Sestak said he was "most grateful" at the decision, noting that teams from The Gambia, Yemen, Libya and Morocco would also attend.

"All 163 teams from 157 countries have gained approval to the United States, including Iran, Sudan and a team of Syrian refugees," said Sestak, a former US Navy admiral and congressman.

"I could not be more proud."

The six girls from Herat, Afghanistan, were reportedly blocked from attending the robotics competition even after two rounds of interviews for a one-week visa.

The rejections appeared to contradict the administration's claim it wants to empower women globally.

"We were not a terrorist group to go to America and scare people," 14-year-old competitor Qaderyan told AFP in Herat before the U-turn.

"We just wanted to show the power and skills of Afghan girls to Americans."

They told AFP they had worked for six months on their robot, which they built out of low-tech, recyclable material such as bottles and boxes.

Mehraban said it had been especially difficult to find girls in deeply conservative, war-torn Afghanistan whose families would allow them to take part.

When the reversal was announced, Ivanka Trump tweeted: "I look forward to welcoming this brilliant team of Afghan girls, and their competitors, to Washington DC next week!"

A limited version of Trump's travel ban — temporarily barring refugees and visitors from Iran, Libya, Somalia, Sudan, Syria and Yemen — recently took effect, after the US Supreme Court allowed it to be enforced pending a full hearing in October.

Travelers from Afghanistan and The Gambia are unaffected by that measure.