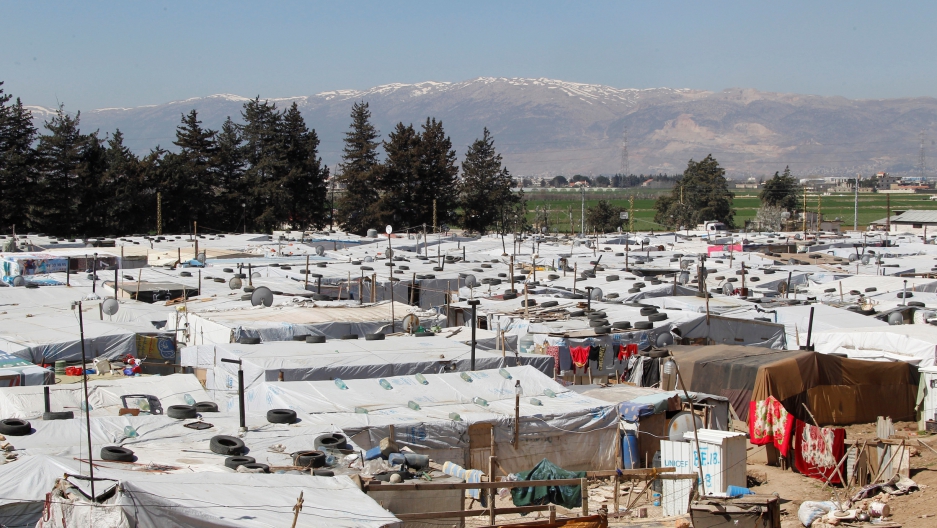 A general view shows tents for Syrian refugees at a makeshift settlement in Bar Elias, a town in the Bekaa valley, Lebanon, on March 28, 2017.

Lebanon has banned all protests following a call by Syrian activists to hold a demonstration against the mistreatment of Syrian refugees in the country.

A demonstration was planned in downtown Beirut on Tuesday to “defend the rights of Syrians in Lebanon,” according to the event’s description on Facebook.

Lebanon currently hosts an estimated 1.5 million refugees from neighboring Syria, which has been wracked by a devastating civil war since 2011. Syrians make up about a quarter of Lebanon’s population, making it the highest concentration per capita of refugees in the world.

Tensions over their presence in the country have been rising steadily over the past year, with senior Lebanese politicians calling for them to return home, despite the fact that fighting is still ongoing over the border.

Tuesday’s planned protest was called following the death of four Syrians who were in the custody of the Lebanese army. The men were among more than 350 Syrian nationals detained in raids on refugee settlements near the border on June 30. The army said five suicide bombers blew themselves up during the raid, killing one civilian.

In a statement, the army blamed the deaths of the four Syrian men on “chronic health issues that were aggravated due to the climate condition.”

But others suspect foul play. The Lebanese Center for Human Rights said torture was to blame, and the international organization Human Rights Watch called for an independent inquiry.

The incident exacerbated a feeling among Syrians in Lebanon that the walls were closing in. Syrians often complain of harassment at the hands of authorities, and many complain that they are blamed for the crimes of Syrian militants.

Related: When a bomb goes off in Lebanon, Syrians suffer

The town of Arsal, near where the raids took place, was briefly overrun by fighters with ISIS and al-Qaeda in 2014. Those groups remain entrenched on the outskirts of the town and clash regularly with the Lebanese army.

Syrian militants have been blamed for a number of terror attacks in Lebanon since the war across the border began.

The creator of the Facebook page that called for the protest has since been arrested, according to local media.

Supporters of the army have promised to hold a counter-demonstration should Tuesday’s protest go ahead, a development that prompted fears of a confrontation between the two sides.

For many older Lebanese, all of this might feel somewhat familiar. Lebanon lived through its own 15-year civil war from 1975-1990 — a conflict that was sparked by divisions over the presence of Palestinian refugees in the country.

Related: Lebanon doesn’t want Syrian refugees getting too comfortable, even in winter

Many in Lebanon fear Syrians will settle here indefinitely — as Palestinians did in successive waves in 1948 and 1967, when tens of thousands were forced from their homes and others fled in the Arab-Israeli wars. The Palestinians’ stay in Lebanon was meant to be temporary, but today some 500,000 are still here.

Others are concerned about the impact such a large number of Syrians has had on the Lebanese economy. The World Bank estimates that about 200,000 Lebanese have been pushed into poverty as a result of the Syrian crisis. Protests by Lebanese workers against the influx of cheap Syrian labor are common.

But most Syrians have no choice but to work for next to nothing. They have little to no means of support, which makes them vulnerable to exploitation and slavery-like conditions.

Following the army raids in Arsal, about 300 Syrians crossed the border back into Syria — a sign that many of them would prefer to face the instability of their war-torn home than stay in Lebanon.