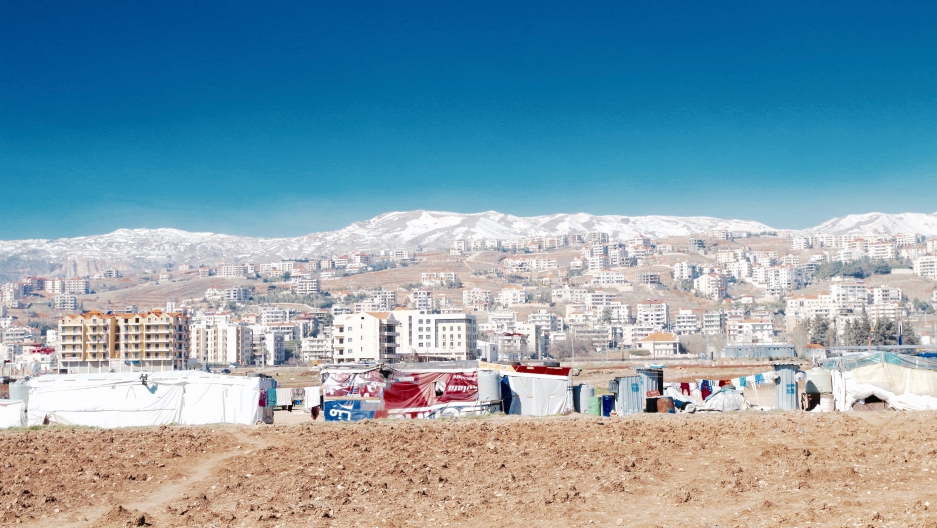 ZAHLE, Lebanon — In the winter months, snow covers the mountains and blankets the valley floors in Lebanon. Heavy storms shake or blow away anything that is not nailed down, and even some of what is.

For the hundreds of thousands of Syrian refugees living in Lebanon in makeshift shelters and empty or unfinished buildings, this time of year is particularly miserable.

“When there is a storm, the water leaks in the walls and the whole tent shakes. The children get scared because of the noise,” says Minwar Khaled Abu Sultan, 43, from Hama, who lives with his wife and seven children at an informal settlement for Syrian refugees in Zahle, eastern Lebanon.

“If another storm comes the roof might fall in. The snow piles on the roof, and the wood I’m using is very old. You can hear it cracking.”

More than 200,000 Syrians live in informal settlements like the one Abu Sultan lives in with his family. The vast majority stay in rudimentary shelters made of wood, plastic sheets and corrugated iron.

For several winters, since refugees began fleeing the civil war next door, the shelters have endured flooding, bitter cold and collapse.

If they could build better shelters, or be provided with them by NGOs working in the country, their suffering would be alleviated. But due to Lebanon’s limited capacity and a fear among the population that refugees will never leave, they are forced to live in the cold. Khaled Abu Sultan, 43, sits with his wife and children inside his shelter at an informal camp for Syrian refugees in Zahle, Lebanon.

The scale of the refugee crisis facing Lebanon is severe. With a population of four million, the country is now hosting more than one million Syrian refugees. The influx has put a huge strain on the economy. Partly as a result of its limited means, Lebanon is not a signatory to the 1951 Refugee Convention, which designates certain rights for refugees and responsibilities for host countries. The government has refused to allow the UN to set up permanent camps, so hundreds of thousands of refugees build their own shelters or find accommodation where they can.

The winter can be deadly in these makeshift homes. In January last year, a mother of three froze to death on the outskirts of Baalbek, in eastern Lebanon. A 10-year-old girl died the same month in a refugee camp, also in the east of the country. In 2014, two newborn babies were among those who succumbed to the cold. One of them was born in a freezing tent near the border town of Arsal, contracted pneumonia and died within three days.

More from GlobalPost: 'I would prefer to live in Syria with the bombs than in conditions like this'

Kassen adds that this rule applies to anyone working with refugee shelters in Lebanon, including NGOs, UN agencies and Lebanese civil society.

In 2013, the Danish Refugee Council, which has been present in Lebanon since before the Syrian crisis, designed an easy-to-build structure that would provide slightly more comfort than the plywood and plastic shelters that were springing up across the country.

The so-called “box shelters,” with a concrete base and wooden walls, were banned by the Lebanese government. They were deemed too permanent.

Even minor infractions against this policy can attract attention from the authorities, as 67-year-old grandmother Fatima found out. She fled her home city of Homs in Syria three and a half years ago and came to Lebanon with her family.

“We put concrete blocks around the edge of our shelter to stop water coming in. But last year there was a flood and it came in above the stones,” she says. Her last name is not being printed to protect her identity.

When she put another layer of concrete blocks on top of the first to better protect her shelter from flooding, she received a visit from the army.

“They asked us: ‘Who told you you could put more stones down?’ and threatened to fine us.”

The blocks were removed. Now, when it rains, she fills cotton bags with smaller stones and places them against the walls of her shelter. An informal settlement in Zahle, eastern Lebanon. A nearby garbage dump looms in the distance.

Objections over refugee shelters come from the local population, too.

Efforts have been made to provide better shelters in the past. In 2013, the United Nations refugee agency (UNHCR) collaborated with flat-pack furniture giant IKEA to design a shelter that would provide comfort, dignity and protection against the elements for refugee families. The shelters were easily transportable, could be put up in four hours and had solar panels on the roof.

The project was paid for by the IKEA Foundation, and the structures were designed by a social enterprise company called Better Shelter.

“The aim was to create a semi-long term shelters response that would last longer than tents, which last around a year max and ... are not adequate when you have snow,” says Johan Karlsson, who led the design team for the project at Better Shelter.

The shelters were designed to deal with the hot weather and the cold. They had locks on the doors, which provided added security for vulnerable women.

In February 2014, the Lebanese government agreed to let the UNHCR test the shelters in Lebanon — which, of all the countries surrounding Syria that had taken in refugees, needed them the most.

The UNHCR chose Halba, in the far north, to try the IKEA shelters out. But as soon as the project got underway, locals protested against the structures.

“We were implementing the project in coordination with a local NGO, so they went to the local NGO and expressed concern,” says Dana Sleiman, a spokeswoman for the UNHCR.

The trial was halted. Undeterred, the UNHCR tried again in another community.

“As a plan B, we tried to set one up in Mount Lebanon but were faced with the same problem. We later decided jointly with the Ministry of Social Affairs to put the project to a halt,” Sleiman says.

The locals thought the IKEA shelters were too permanent, according to Sleiman. They worried that they might encourage Syrians to settle in the area.

The seven shelters were packed into storage at the UNHCR building in Beirut. Later they were sent back to Sweden. The issue of permanence for refugees is one that weighs heavy on Lebanon’s conscience, a product of its troubled history. When the state of Israel was created in 1948, close to 100,000 Palestinians who were expelled or fled the fighting came to Lebanon, setting up home in hastily constructed refugee camps across the country.

In the decades that followed, tensions between heavily armed Palestinian militant groups in the country, many of whom were using Lebanon as a base to launch attacks against Israel, and predominantly Christian groups opposed to their presence grew steadily.

Palestinian groups played a key role in Lebanon’s 1975-1990 civil war. Today, more than 500,000 Palestinians live in refugee camps here — camps made of concrete and stone, which are for all intents and purposes as permanent as any other neighborhood.

“These camps started as tents and then they developed into neighborhoods. We still call them camps, but that’s not what they are now,” says Kassen. He notes that as recently as 2007, major fighting erupted between the Lebanese army and members of the Fatah al-Islam militant group in the Nahr el-Bared Palestinian camp near Tripoli. Much of the camp was destroyed after a months-long battle.

“The people still have this in mind. This is why it is very hard for them to accept [the government building permanent shelters].”

“Lebanon was only five years old as a country when it absorbed Palestinian refugees in 1948, and the Lebanese Civil War was partly a legacy of that tragedy of displacement," says Elias Muhanna, an Assistant Professor of Comparative Literature and Middle East Studies at Brown University and the author of Qifa Nabki, a blog about Lebanese politics. "Yes, there are real concerns about Lebanon's ability to manage its population density, which is among the highest in the world. But there's also an emotional anxiety about the presence of communities that the state is unable to accommodate and absorb.”

There is an added political context behind this fear: Lebanon’s political system is based on a delicate balance of power — often skewed — between the country’s many sectarian groups. Some fear that the absorption of more than a million Sunni Syrians would dramatically alter the makeup of the country’s demographics, to the detriment of other groups.

In a country where all politics is sectarian, this anxiety is a powerful motivator.