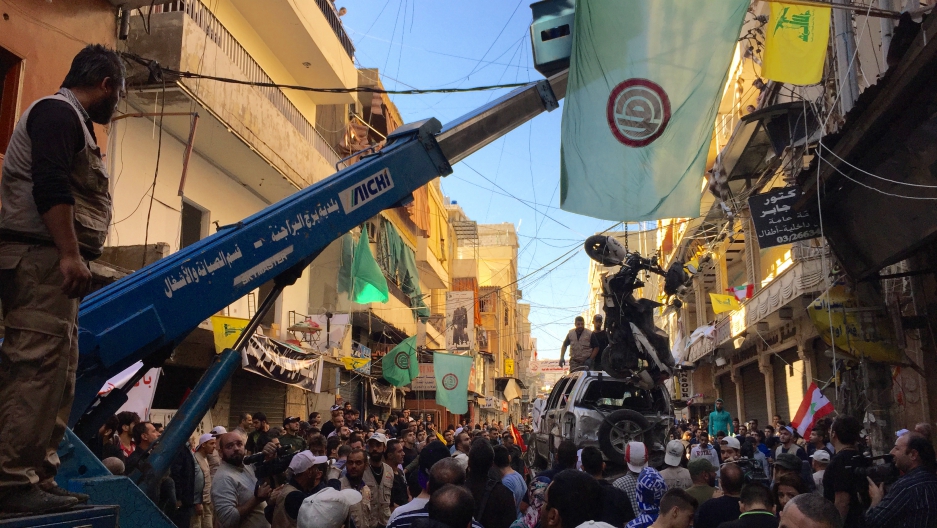 The cleanup begins at the site of a double suicide bombing in Bourj el-Barajneh, a neighborhood in southern Beirut. At least 43 people were killed in the attack, which was claimed by the Islamic State.
Credit: Richard Hall
Share

BEIRUT, Lebanon — A line of trucks led up the narrow shopping street to the scene of the previous night’s carnage, waiting to haul away masses of twisted metal from the site of the explosion.

At the front of the line was a scene of chaos: workers shouting as they brushed shattered glass from balconies while a crane lifted the wreckage of a smashed car to be taken away. Residents stood and watched, some still in a daze.

The morning after a deadly twin suicide bombing attack claimed by the Islamic State (IS) in the Beirut neighborhood of Bourj al-Barajneh, many who had witnessed the deadly event had returned to the scene.

“I was smoking shisha outside,” said Hassan, 22, standing across from the shop where he'd been working the night before, just meters away from the first blast site. “A customer asked me to get a bag for her so I had to go inside. That’s when the explosion happened. If I hadn’t gone inside then I would have died.”

Minutes later, as Hassan was making his way through the smoke to search for friends among the bodies, a second suicide bomber detonated his device a short way up the road.

More from GlobalPost: Witnesses to Beirut bombing describe carnage in the street

At least 43 people were killed in the blasts, and more than 200 injured, according to the Lebanese health ministry. It was one of the deadliest suicide bombings to hit Lebanon since the end of the country’s civil war in 1990. Two of Hassan’s friends were among the dead; one of them was a Syrian who worked in the shop.

The southern suburbs of Beirut are no strangers to such attacks. The largely Shia neighborhoods in the south of the city were the target of a concerted campaign in 2013 and 2014 carried out by radical Sunni militant groups from Syria, chief among them the Al Qaeda affiliate Jabhat al-Nusra and the Islamic State (IS).

Those groups were behind a series of bombings in Shia areas, which they claimed were retaliation for the involvement of Hezbollah — a Lebanese Shia militant group and political party — in Syria’s civil war.

The party has sent thousands of fighters to Syria to join President Bashar al-Assad’s forces in their war against rebels trying to oust him. Hezbollah has fought both the radicals pitted against Assad and more moderate groups.

Lebanon has struggled to contain the spillover from the war next door since its outbreak in 2011. Following last year’s bombings in southern Beirut, Hezbollah drastically increased security in the areas under attack, and a period of quiet set in. Thursday’s bombing was the first attack in the city since mid-2014.

In its statement claiming responsibility for the bombings, IS promised more attacks against Shias. The group said two Palestinians and one Syrian had carried out the blasts.

"Soldiers of the caliphate blew themselves up in the stronghold of the heretics, and after the apostates crowded around the site of the explosion, a second martyr blew himself up using his explosive belt," the statement read.

Unconfirmed reports suggest the attackers may have come from the Palestinian refugee camp just minutes away from the blast site.

But if the aim of the attacks was to dent support for Hezbollah among its supporters, it appeared the opposite was true.

“We are not scared,” shouted one man, as the wreckage was being cleared. “Anyone who died is a martyr. This is happening in Iraq, in Syria and now against Russia too.”

More from GlobalPost: What Jeb Bush doesn't know about Lebanon

Walking through the wreckage, Zuhair Jalloul, the mayor of the Bourj al-Barajneh municipality, was more direct.

“We feel that this was a message to the people who support the resistance,” he said, referring to Hezbollah. “This does not change anything. The only way we can have security is to stay on the path of resistance.”

Hezbollah gunmen, alongside Lebanese army soldiers, patrolled the site of the bombing on Friday. Jalloul said Hezbollah will introduce even more security measures in the coming days, including at the entrances to the refugee camp.

He stressed, however, that the suspicion that the bombers came from the camp would not damage relations between the Palestinian community and locals.

While the political ramifications of the attack are up for debate, others are focusing on their recovery.

In the nearby Sahel hospital, 30-year-old Ali Nasser was lying on a bed with his leg in bandages. He had been at the site of the second explosion when his knee was hit by shrapnel.

“Whatever happens I am staying in the neighborhood. This only makes me more stubborn to stay."

“I heard the first blast and ran to look for my brothers and sisters,” he said. “Then I was hit in the second bomb.”

“I saw death in front of my eyes,” he said from his hospital bed, as his family stood nearby.

Like many others, Nasser fears that the wave of violence that rocked Beirut’s southern suburbs last year may return.

“I feel the rampage may come back to Dahiya [Beirut's southern suburbs]. The Shia are being targeted. And Hezbollah, too.”

On a different floor of the hospital, 21-year-old Marouf al-Houssari is being treated for inhalation of smoke from the bomb. He was working in a nearby bakery when the first bomber detonated his explosive belt.

“At first I thought the oven had blown up. It has happened before,” said Hussier. "I saw many dead people on the street. There was a man on my left who was cut in half.”

“When I saw all these dead people I fainted, and woke up here in hospital,” he said.

Marouf said a girl who worked in the bakery was killed in the blast, and another colleague lost his legs. Four others are missing. But Marouf, too, was insistent that the bombs will change little.

“Whatever happens I am staying in the neighborhood. This only makes me more stubborn to stay.”