Women take their photo in front of Istanbul's Taksim Square memorial to the July 15 coup attempt in Turkey.
Credit:

Turkey is marking a year since a thwarted coup attempt rocked the country, and its public spaces bear the marks.

The cobblestone pier in Ortaköy is full of Turks and tourists alike, aiming for that coveted selfie with an Istanbul icon: the Bosphorus Bridge. Or is that the July 15th Martyrs Bridge? That’s the new, official name, in honor of those who died resisting last year’s attempted coup.

The date is now part of Turkish history and President Recep Tayyip Erdoğan’s government is making sure people don't lose sight of it. It’s unveiling new monuments and has already renamed various schools, mosques, swimming pools, bus and train stations, even entire neighborhoods — all after July 15.

In daily life, though, the names depend on whom you ask. Some who support the government say, absolutely, they use the new July 15th name. Others say they’ve never heard anyone call it that. That basic disconnect reflects the country’s polarization over all sorts of things nowadays. 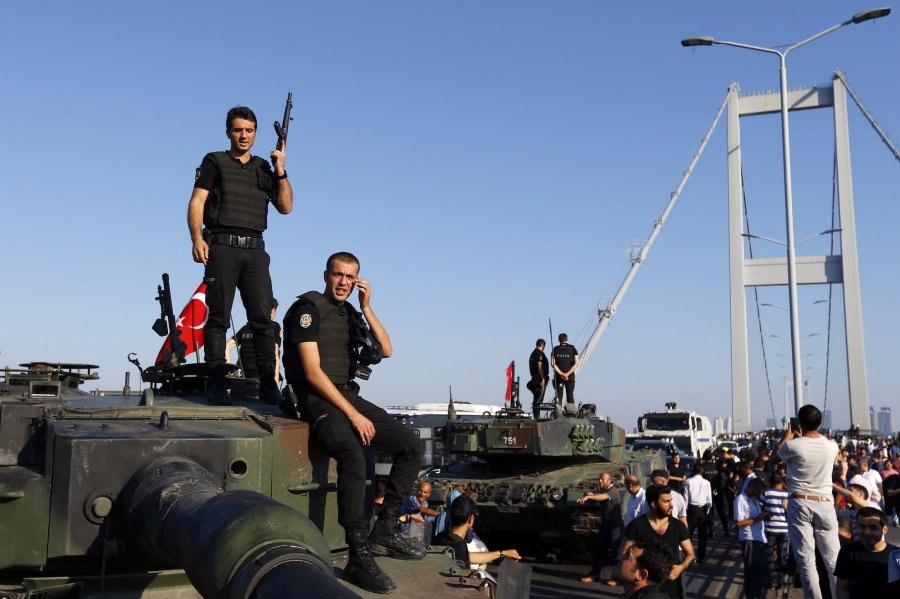 Policemen stand atop military armored vehicles after troops involved in the coup surrendered on the Bosphorus Bridge in Istanbul, Turkey, on July 16, 2016.

For many, there are still raw feelings about the dramatic showdown a year ago. On July 15, 2016, a rebellious faction of the Turkish military attacked government institutions and said it was overthrowing President Erdoğan. Loyal forces and masses of residents rushed to the streets to stop them. The clashes left about 290 people dead, including several who died on the bridge over the Bosphorus Strait.

Ordinary civilians marched on tanks blocking that bridge. One of them was 20-year-old Batuhan Ergin, who lost his life that night — just two months after coming home from military service. 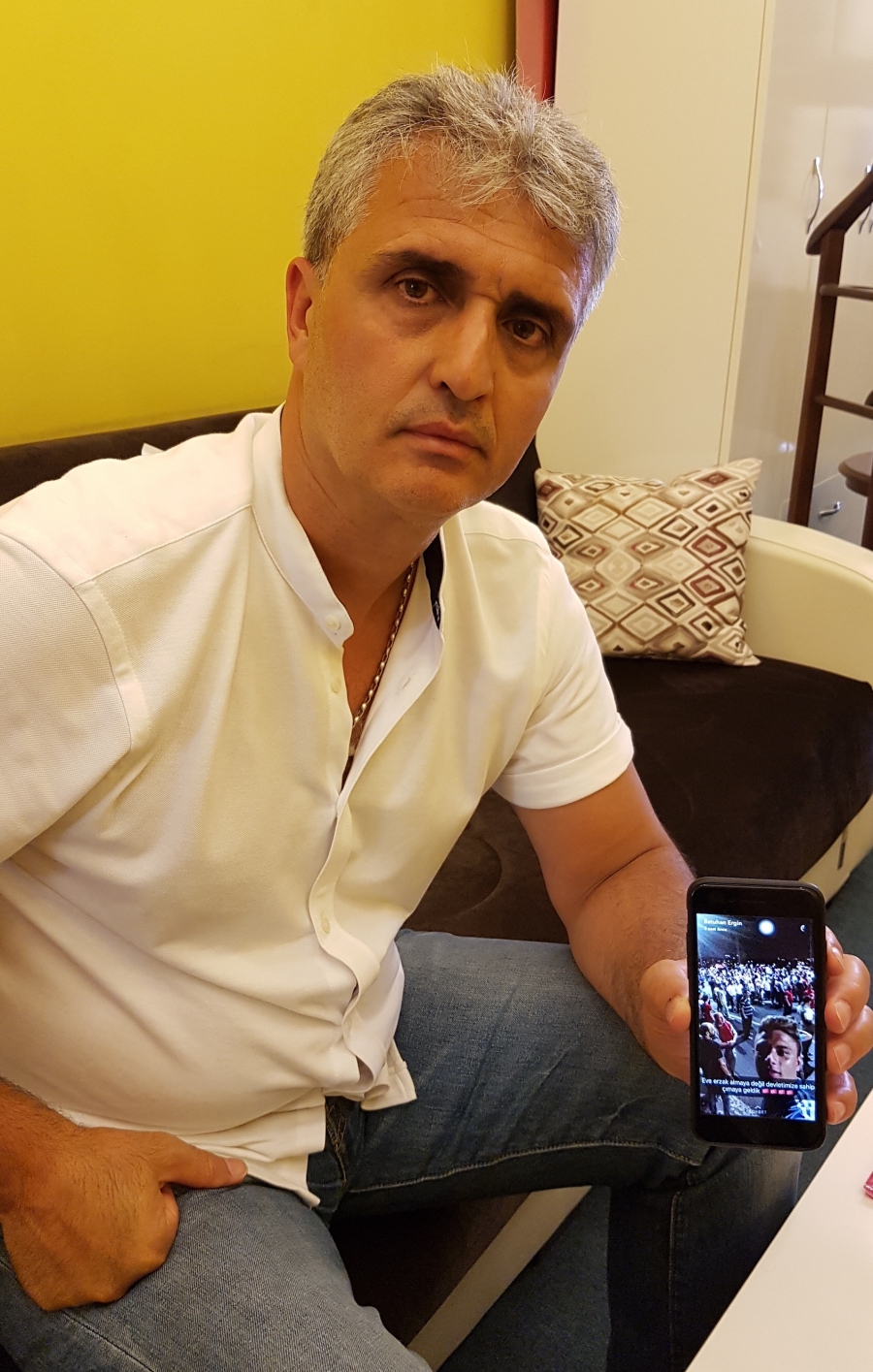 Ahmet Ergin shows a selfie his son Batuhan took from the Bosphorus Bridge, where he was shot and killed on the night of Turkey's coup attempt.

Batuhan’s father, Ahmet Ergin, is a furniture salesman in Ortaköy. As he flips through his phone filled with photos of his son, he plays some videos that his son took from the bridge. He’s shouting, “Soldiers, back to the barracks!” Batuhan looks exhilarated, like he can’t believe his eyes. Ergin says, “The night of the coup attempt, he went to the bridge with his friend, he fought against the soldiers there, and that night, he became a martyr with one bullet to his heart.” He says his last words to his son were, “‘Batuhan, my son, come home.”

The government named a school after Batuhan, and Ergin says their street and the bus stop will also be renamed. At least 53 other bus stops have already been renamed after coup victims.

Ergin says he’s grateful to the government for all its support. He tries to take comfort in all these things to honor his son, but he’s still grieving. “It feels like yesterday to us,” he says. “I can't believe it's been a year.”

At midnight on the anniversary itself, the government will hold a 24-hour “democracy watch,” the name for the rallies that occupied public spaces for weeks following the failed coup attempt. They were filled with Turkish flags and nationalist songs on repeat, including the “Recep Tayyip Erdoğan Dombra.” The one-time campaign song has become an anthem to Erdoğan’s supporters. To them, he’s the leader of a major modern victory for Turkish democracy — to the point that some even call July 15 the Second Independence War. The first, of course, was the war that founded modern Turkey. It was led by Mustafa Kemal Atatürk, the country’s staunchly secular first president.

A vendor holding a Mustafa Kemal Atatürk flag walks outside the July 15 memorial area set up in Istanbul's Taksim Square.

Asli Aydintaşbaş, a columnist with the opposition paper Cumhuriyet (which currently has 12 journalists in prison), says the name changes are an effort to rewrite the history of the Turkish republic. “What happened last year was undoubtedly a terrifying and traumatic event for Turks and for the entire nation, but I think that there's an effort now to write it into the history of Turkey as a turning point, for what is now referred to in AKP circles, in the circles of the governing [Justice and Development] Party, as the ‘New Turkey,’” she says.

Erdoğan has long had a vision for a “New Turkey.” It includes allowing Muslims to make religion part of public life and reconnecting to the history of the Ottoman Empire. That’s in conflict with Atatürk’s vision for a modern, secular republic, and it’s at the heart of Turkey’s polarization. Pointing to the close results in Turkey’s constitutional referendum, Aydintaşbaş says, “It's 50 percent against 50 percent, basically. That's been the case for a long time, it's a divided country, and the coup hasn't helped bridge that gap.” 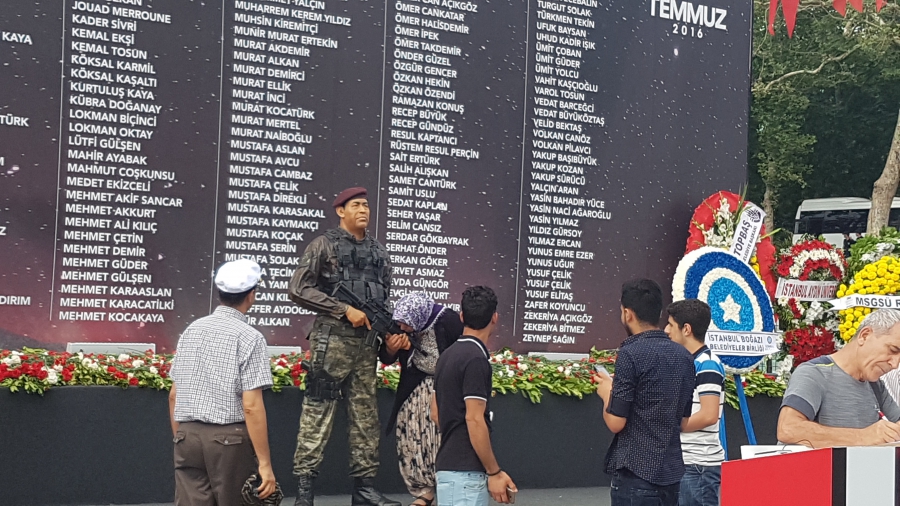 A woman kisses the hand of a plastic replica soldier, in front of a list of people killed during the coup attempt, in Istanbul's Taksim Square.

The coup also led to a mass purge aimed at alleged supporters of it. Over 100,000 people have been fired from their jobs and some 50,000 have been arrested. Although most say they had nothing to do with the coup, they’re accused of being followers of a prominent Turkish Muslim cleric named Fethullah Gülen, the president’s one-time ally turned archenemy, whom he blames for masterminding the coup attempt. Gülen lives in self-imposed exile in the United States, and he denies any involvement in the coup.

For people like Ahmet Ergin, Gülen’s presence in the US is impossible to understand. “Fethullah Gülen, that honorless guy, why don't they give him back to us? Can you please make me heard to [US] authorities?” he asks. He says, to him, it’s as if Turkey refused to return Osama bin Laden to the United States after Sept. 11.

It all makes for a strange atmosphere for a new holiday when so many people feel there's little to celebrate. A year has passed, but there’s still no consensus on this latest chapter in Turkey's history — no matter what you call it.