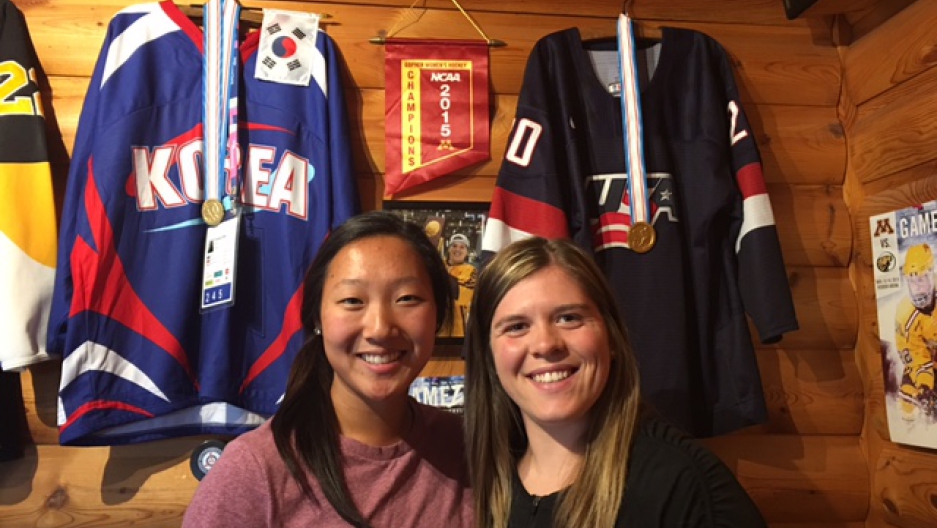 Marissa and Hannah Brandt at their parents' home in Vadnais Heights, Minnesota.

While growing up, Marissa Brandt rarely thought about her biological South Korean mother.

She was adopted when she was 4 months old by an American couple living in a predominately white suburb of St. Paul, Minnesota. Brandt, now 24, says her Korean ethnicity wasn’t something that she dwelled on.

Now, after more than two decades since leaving Korea, it’s the connection to her roots that is sending Brandt to the 2018 Winter Olympic Games. In 2015, following Brandt's time as a Division III women’s ice hockey player for Gustavus Adolphus College, she received an offer to try out for the South Korean team.

“I didn’t know what to say right away. It was out of the blue. I remember it was finals weeks of my senior year of college. And this was the last thing on my mind, you know?” remembers Brandt.

As host of the Pyeongchang 2018 Olympic Games, South Korea will be able to participate in sports like ice hockey, despite not qualifying. So, it’s not unprecedented that the country would shop for overseas talent or “imports” to help boost its chances of performing. When recruiting, players from Canada and the US — where teams routinely dominate in the sport — are a logical target.

Related: They came to America as adoptees but were never made US citizens

Specifically, Brandt says scouts for the women’s team were interested in players with Korean ethnicity. At least four players, two from Canada and one other American besides Brandt, have some Korean blood. Brandt, however, is the only overseas recruit on the team who was born in Korea. But to compete for Team Korea, Olympic rules require she and the other foreign recruits attain Korean citizenship.

For Brandt, being an adoptee helped. She says her path to citizenship was pretty straightforward.

“Really all I had to do was bring a bunch of paperwork to a couple different offices and I eventually got my [Korean passport] probably five months later.”

It is ironic for Brandt, who originally lost that citizenship as one of more than 160,000 native-born Koreans who were adopted internationally as children since the 1950s. Brandt’s adoptive parents, Greg and Robin, finalized her US citizenship before she started grade school. She became a naturalized American, in the only country she knew.

For many transnational adoptees, an emotional distance toward their origin country and ambivalence over ethnic identity are common feelings during childhood that can even extend into adulthood. Brandt says when she was around 10, her mother sent her and her younger sister, Hannah (who is not adopted), to a Korean cultural camp to help her connect to her heritage.

“I remember I did not like going," says Marissa Brandt. “But my sister loved it. So we kept going back for her because my mom thought it would be funny to just send her to Korean camp without me.”

Hannah, who is white like their parents, says she liked the spicy food and the martial arts, taekwondo.

“I really enjoyed going,” blond-haired Hannah Brandt, 23, recalls. In hindsight, this proved to be a rare dissention between the two close-knit sisters. In fact, their mother used to dress them in matching outfits and pushed them around in a double stroller.

Related: Korean adoptees are using DNA kits to get a glimpse of their ancestry

“I actually had people come up and say, ‘Oh you have twins,'” Robin Brandt chuckles. “And I’d say, not exactly. Take a look.”

Hannah similarly remembers encountering confusion over their relationship. “We would tell people [when we were younger], ‘This is my sister Marissa.’ And people would say, ‘Oh I don’t believe you,’” she says.

The two sisters would go on to share hobbies and interests, including figure skating and eventually ice hockey. And they will soon add an Olympics to the list.

“Now we get to experience [this] together and it’s the first one for both of us. You just can’t write a story like that,” says Hannah.

But unlike her sister, Marissa has struggled with feeling a connection to the nation she’ll compete for. Over the past two years, she has spent weeks to months at a time in Korea, training and getting to know her teammates, despite a huge language and cultural barrier. She has slowly learned a few Korean words and phrases, like how to say "I’m hungry."

She says at times she's keenly aware of being a cultural outsider. During meals, Brandt says her taste buds often don’t agree with pungent Korean dishes. Sometimes, she says she’s had to subsist on only rice.

Brandt says she and her teammates have slowly become closer — perhaps not unlike her own process of connecting back to her birthplace. She says the moment when she really began to feel Korean, was this past spring at the World Championships. Team Korea took gold in its division.

“We did the national anthem, and you know you’re wearing your Team Korea jersey and the flag is being raised up high and so many fans are there to watch you. And it was just like a moment of, 'okay, I’m really proud to be Korean,'" Brandt recalls.

She is also ready for another big step. Brandt says she would like to meet the Korean woman who gave birth to her in a hospital in Seoul. Brandt says she knows very little about her biological mother, but she believes she was unmarried, and gave birth in a society that did not look favorably upon single mothers and their children.

“All we know is she had olive skin and a round face,” says Brandt.

Brandt knows that with no identifying information, the chance for a reunion is very slim. The Korean government says since 2012 only about 15 percent of biological family searches by adoptees result in a match that same year. Korean adoption experts say that percentage dips even lower when factoring in the many searches done by adoptees over the past four or five decades.

Still, Brandt hopes that competing in the world’s spotlight for Team Korea might prompt her biological mother to step forward. But she says it is a secondary priority.

“I’m going there first, to represent my country and be the best I can be for my teammates. And if I can find her and meet her, that would be the cherry on top of everything. But number one is … hockey,” she says.

And her American family will be there, cheering her on.