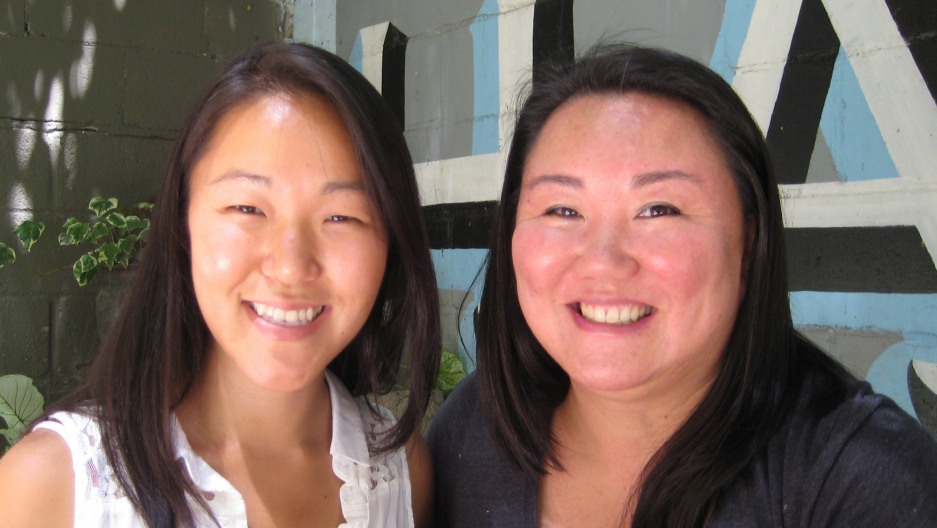 Kaomi Goetz, 44, (r) with distant relative, Alice Thompson, 28. They're both Korean-American adoptees who found a shared genetic connection on a DNA database, after they had met by chance at a gathering for adoptees in Brooklyn, New York. Kaomi is still trying to connect with a closer match identified in a different DNA database.

I don’t know the actual day I was born. I also don’t know anything about the woman who gave birth to me. Was she married? Was she single? Was she young? Was she pretty? Was she happy? I know I was born in South Korea, but the circumstances of my birth, including the exact location, are unknown.

In effect, the first five months of my life, before I was adopted by Americans, had vanished. When I landed at Chicago O’Hare International Airport in 1971, I came with just the clothes I was wearing. But more than 40 years later, I realized I had also come with something else: my DNA. So, when I learned about an offer for a free DNA kit to learn more about my ancestry, I jumped at the chance. 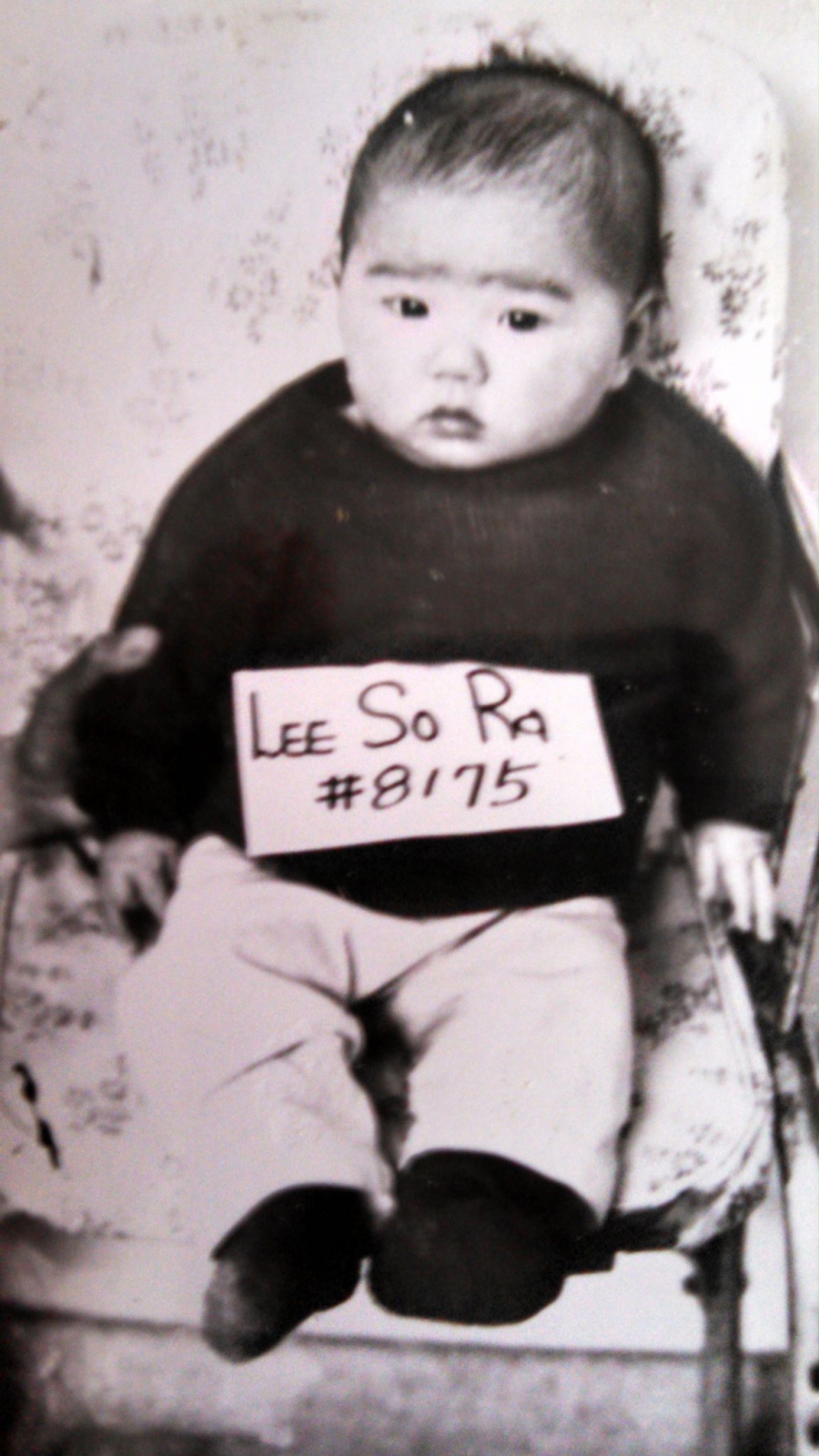 My adoption photo in Korea, with my adoption number #8175.

Since the 1950s, more than 200,000 Korean children have been adopted to North American and European parents. In recent years, thousands of us adoptees have connected online and in real life. After joining a Facebook group called Korean American Adoptees, I learned about a DNA kit that provides ancestry information. Another Korean American adoptee, Thomas Park Clement, was offering to cover the $99 cost of the kit for any adoptee who wanted one.

“Everyone on the planet has a right to know who their relatives are,” Clement told me recently.

Clement was among the first wave of Korean adoptees to arrive in the United States in the '50s. In his autobiography, Clement writes that he was old enough to remember his own relinquishment on the chaotic streets in the aftermath of the Korean War. The Indiana-based inventor and scientist recently set aside a million dollars of his own money to fund the DNA kit project. (To date, the offer is limited to Korean American adoptees but Clement has plans to expand it.)

For adopted Guatemalans, a searcher will look for birth moms. But sometimes the reunions are fraught.

One girl's controversial adoption, and what it says about Guatemala's broken international adoption system

This woman reconnected with her birth mother in Brazil to find peace. For her adoptive mom.

'Somewhere Between': Adopted from China, Coming of Age in US

For Korean American adoptees, any information about our backgrounds is a novelty. Korean adoptions have historically been closed affairs. And the country’s privacy laws can serve as barriers to adoptees who do search for birth parents.

“We’re cut out of the filial piety. We [adoptees] are in a suspended zone,” Clement says. He’s done DNA test and he says he believes in the power of science to give adoptees back some of that power.

The kits are from the California-based genetic testing company “23andMe.” It comes in a square cardboard box and contains a plastic tube. After you spit into the tube, you mail it back to one of the company’s labs. 23andMe will extract and analyze your DNA from the sample. In a couple of weeks, ancestry results, including matches to known genetic relatives (who have contributed DNA to the database), will appear in your online account.

I was excited to learn my own results. It was kind of comforting to see my Korean heritage boldly confirmed. Also interesting and unsurprising, the company identified my ancestry as being Japanese and Chinese as well. When I clicked on my relative results, I found I was linked to more than 200 people in 23andMe’s database. Most seemed to be living in the United States and related to me only distantly at best.

And some have called for caution in using the kits this way. Robert Klitzman is director of the masters of bioethics program at Columbia University. He points out that your DNA contains about three billion letters. And right now consumer genetic companies, like 23andMe, can only give you a partial look.

According to Klitzman, these direct-to-consumer tests, like the one from 23andMe, are only able to make predictions at this point. And genetic matches to people with similar DNA are only possible from the people already in that company’s database. Since 23nadMe doesn’t currently ship kits to Korea, there is only a slim chance of actually connecting with someone there who can shed light on my family. Klitzman says consumers may not understand these details.

“They may think they must be getting more reliable information than they are. And also they may have unrealistic expectations. They may think they’re going to fork over their money and find long-lost relatives. And that may not be the case,” he says.

23andMe acknowledges accuracy and refinement could be improved. Some users, like me, have discovered a portion of our ancestry composition can only be identified by region, like “Broadly East Asian.” Even how a distant relative is related to you is imprecise — for example, ‘a third- to distant cousin’ is more of a range. Kasia Bryc, a geneticist at 23andMe, says that’s because DNA is not passed down evenly across generations. But she adds that the ancestry information will get better.

To do so, the company concedes, it will need more people in its database. But 23andMe appears to be growing, despite being forced to pull its health reports in 2013. Last month, it announced it had surpassed a million users since it began offering services in 2007.

But even if it’s a long shot to connect to Korean relatives, the test has still been life changing for some. Cynthia Gordon-Burns is a 50-year-old biracial Korean American adoptee living in Woodbridge, Connecticut. She had always known she was half Korean, but the other half was a mystery.

“I tan really well and I have naturally curly hair,” Gordon-Burns says of early hints.

Through the DNA test, she finally discovered the ethnicity of her unknown American serviceman father. She found herself staring at a computer screen with hundreds of matches with DNA relatives of Puerto Rican descent. Gordon-Burns says just knowing made her incredibly happy.

“When I found second and third cousins on my Puerto Rican side, I realized that wow, this is close family,” Gordon-Burns says. “This [test] is where you can connect the dots and find out how you’re related.”

From the results, Gordon-Burns connected with a second-cousin in California. He’s now helping her to test different relatives in Puerto Rico to narrow down the identity of her father. The way things are going, she thinks she’ll know very soon.

As for me, my search results haven’t been as satisfying. My second- to third-cousin identified in the test hasn’t responded to several messages I sent her. It’s pretty disappointing after the excitement of finding her. I guess that’s something that science and technology still can’t deliver.