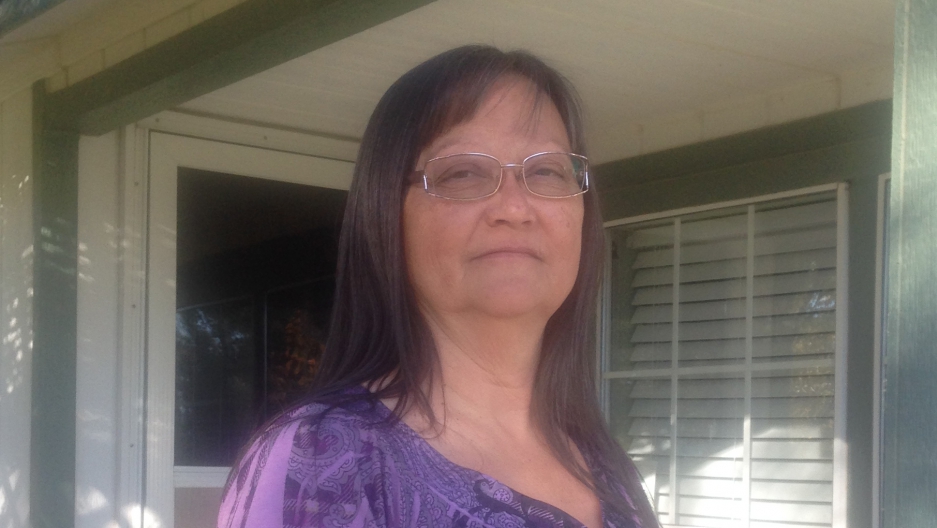 Ella Purkiss was adopted from South Korea by American parents. But her parents never had her naturalized as an American citizen — which she only discovered when her husband died.

That's the situation Ella Purkiss finds herself in.

“My Korean name is Kim Yang Ai,” she says, sitting in her trailer home in Pahrump, Nevada.

Her Korean name is about all she knows of her life in Korea. Purkiss, 61, grew up in the United States, got married, raised kids and worked as an electrician. When her husband died last year, Purkiss tried to collect Social Security benefits. That’s when she found out that she wasn’t an American citizen.

“Apparently my whole life has been a lie,” Purkiss says.

She says her adoptive parents led her to believe that she was a naturalized citizen, “even to the point of telling me how I sat on the judge’s podium, and he had talked to me. They even took pictures after all the supposed swearing in had taken place.”

Purkiss doesn’t know why her adoptive parents lied, and she can’t ask them as they’re no longer living. But over the years, she was able to do things citizens do. She voted. She sat on juries.

Purkiss never obtained a US passport — she never needed one because she didn’t travel abroad. However, her American parents were supposed to make sure she was naturalized.  It’s something that South Korea required for all international adoptions, but the adoption agency never followed up. And she’s not alone in this. Adoptee advocates estimate as many as 15,000 or more children adopted internationally by Americans never received their US citizenship. Adam Crapser is another example. Earlier this year, the married father of three spoke with the adoptee advocacy group, Gazillion Strong.

“I wish I could vote. I wish I was an American citizen,” Crapser, 40, said. “I wish I would have never ever gotten in any trouble in my life.”

Crapser was adopted from South Korea as a toddler, and endured repeated abuse by his American adoptive parents before being “rehomed” into another abusive household. He ended up on the streets, got in trouble with the law and spent some time in prison for his crimes. Neither set of adoptive parents ever filled out the paperwork to have him naturalized as a citizen.

Years later when he tried to apply on his own behalf, the government saw his criminal record and flagged him for deportation to Korea. Crapser told Gazillion Strong that he regrets his past mistakes and that he wishes he had had a stable, nurturing childhood for guidance as he came of age. But he says he doesn’t deserve to be removed from the only country he’s ever known.

“You know, America opened its borders to immigrants. America signed a bill to bring us over from Korea ... during a military action. They promised us a better life over here. All I’m asking, I would ask them to keep their promise,” he said. He’s now awaiting a decision on his case.

Back in 2000, Congress passed the Child Citizenship Act, which gave international adoptees automatic citizenship. But it left out people like Adam Crapser and Ella Purkiss who arrived in the US before the early 1980s. According to Kevin Vollmers, executive director of Gazillion Strong, there are at least 45 known cases of adoptees deported to India, Brazil, South Korea and other countries of origin for minor drug offenses and other crimes.

“We have an ethical obligation to make sure these people have citizenship, because that is what was promised to them,” Vollmers says. “And so, to take that part out, to say that certain adoptees don’t deserve citizenship is essentially to question the foundation of what adoption was built on.”

In November 2015, US Senator Amy Klobuchar of Minnesota introduced legislation to grant citizenship to adoptees from earlier. Neither she nor any of the other sponsors would comment for this story, however adoptee advocates say the bill faces an uphill battle because it would also create a pathway for some of the deportees to return.

For now, Purkiss says she’s in limbo. She’s running out of money because authorities have so far denied her Social Security claims over questions about her status. She did apply for US citizenship last spring. But this past weekend, she received word that her application was denied because she waited too long to file papers for naturalization. Purkiss has now reached out to her Congressional representatives because, at this point, she says legislation may be her only hope.

“It’s sad to think that small children ... people can take them from a foreign country, drop them into another country, and no one guarantees that they are a citizen of anywhere.”