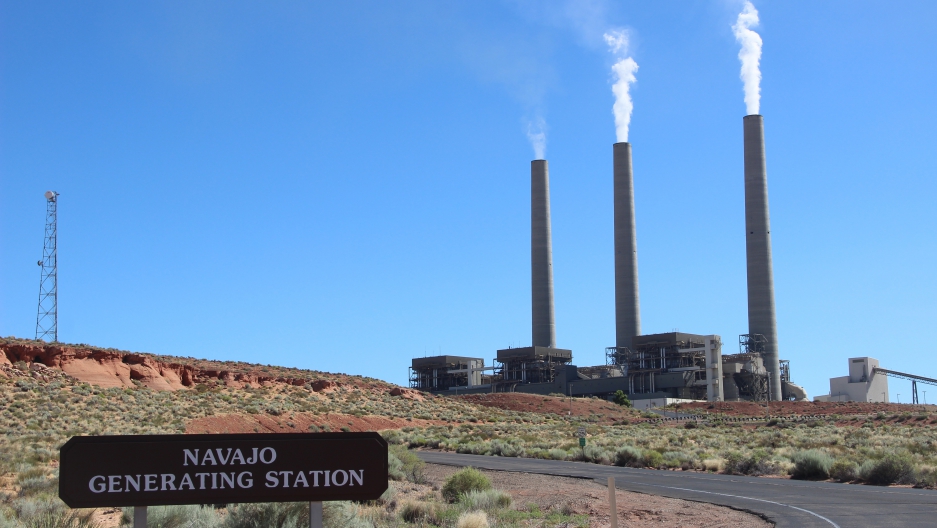 The operators of the Navajo Generating Station, near Page, Arizona, plan to close the plant in 2019.

The closing of the Navajo Generating Station could be seen as the first big test of President Donald Trump’s promise to bring back coal.

“The Trump administration has not lifted a finger for us, and I don’t believe that he will,” Begaye said.

The coal-fired power plant outside of Page, Arizona, is one of the biggest in the country, and an economic backbone of the Navajo reservation.

In February, its operators announced they wanted to close the plant in 2019, a quarter-century earlier than expected.

This news landed like a ton of bricks in Window Rock, the capital of the Navajo Nation.

“This thing just was dropped on us,” said Begaye. “There was no preparation, no warning.”

For one Navajo family, a coal power plant has preserved a way of life

For local water activists, Navajo coal mine closure would be a long-awaited win

Fees from the power plant and the nearby mine that supplies its coal make up roughly a third of the Nation’s operating budget each year, Begaye said.

So, he wanted to save the plant. And he turned to a man he saw as a natural ally, newly inaugurated President Trump, who campaigned on promises to bring back coal and return power to people outside Washington. 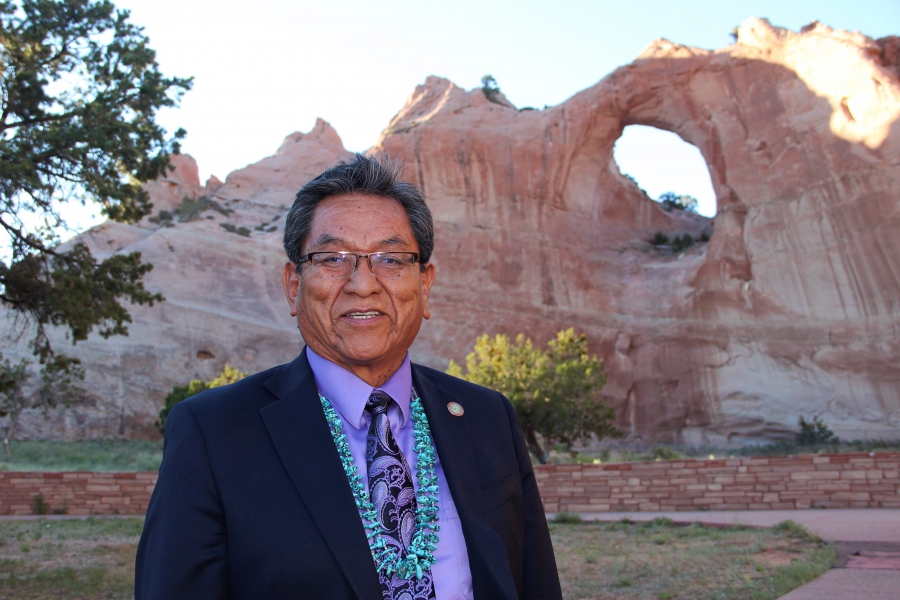 Navajo President Russell Begaye in front of the rock formation for which the Navajo capital of Window Rock is named.

But the Navajo president was disappointed.

He wanted a dramatic deal from Trump: tax subsidies or incentives to keep the plant open.

The help he got was more subtle. The Bureau of Reclamation, a federal agency that’s part owner of the plant, has been facilitating negotiations to keep the plant open for two more years, in the hopes of buying time to find new owners who will keep the plant running after that.

But as the July 1 deadline for those negotiations nears, the vision for the future of the Navajo Nation is already changing.

Powerhouse in the desert

The three smokestacks of the Navajo Generating Station can be seen from miles around in the dusty northern Arizona desert.

The plant is an imposing structure, sitting right on the edge of the Navajo reservation and surrounded by wide expanses of sagebrush and sandstone rock formations.

It was built in the early 1970s as part of a federal project to pump Colorado River water more than 300 miles along a canal south to Phoenix and Tucson.

That water helped fuel the population boom in the desert Southwest, and today, the 2,250-megawatt power plant supplies electricity to more than a million customers.

The federal government still has an ownership stake in Navajo Generating Station, along with four utilities serving Arizona and Nevada.

But the economics of the energy industry are driving those utilities away.

“There’s cheaper energy options out there,” said Paul Ostapuk, a manager at the Navajo Generating Station.

The recent fracking boom has pushed prices of natural gas so low, coal is no longer competitive in some markets.

“The primary driver [of the plant’s closure] is just the low cost of natural gas right now,” Ostapuk said. “It’s making operation of this plant uneconomical.” 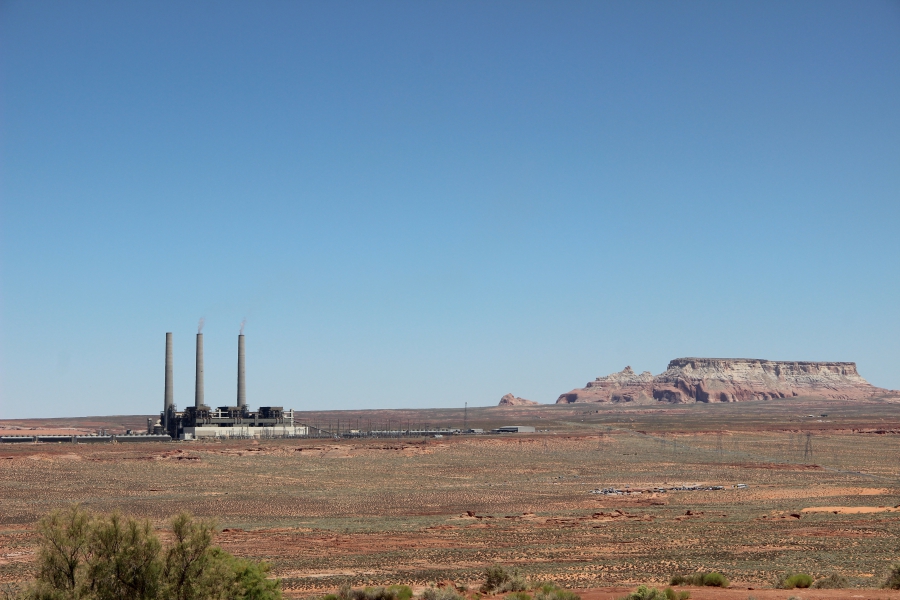 The Navajo Generating Station is an important employer in rural northern Arizona.

But its closure will hit the surrounding communities hard.

In addition to payments that help fund the Navajo central government and more than 100 local entities, the power plant and coal mine are key employers in northern Arizona.

Roughly 725 people work at the generating station and nearby Kayenta mine, more than 90 percent of them Native American.

“The whole region is heavily dependent on this one source of revenue,” Begaye said. “It’s going to be devastating.”

It’s a region ill-equipped to absorb the economic blow. More than 1 in 3 people on the Navajo reservation live below the federal poverty line.

Unemployment is high, and high-paying jobs are hard to find.

Without the plant and mine, workers would have to retire, move or find lower-paying work.

“It’s just going to break my family apart,” said Evangelene Benale, whose husband works at the plant. “My kids and I, we probably won’t see my husband as much because he would probably have to work on the road.”

Benale, whose entire family lives nearby, says moving doesn’t feel like an option for her and her four kids.

“It’s the reservation, and I feel safe here,” Benale told me one night in a small Navajo community just a few miles from the plant.

Many people in the region, like Delphine Haskie, see the plant as a force helping to keep families connected to their Navajo culture.

“It keeps the people connected to their heritage, to their roots, rather than going off the reservation and looking for jobs,” Haskie said.

A vision for a new future emerges

If the plant closes for good, the environmental impacts will be much more positive than the socio-economic ones.

The Navajo Generating Station is a leading source of nitrogen oxides, which causes ozone and particulates that are both harmful to human health.

Emissions from the power plant contribute to haze that clouds views at the Grand Canyon and 10 other national parks and wilderness areas.

And it’s one of the single biggest emitters of greenhouse gas pollution in the entire United States. In 2015, its smokestacks spewed more than 14 million metric tons of CO2 into the atmosphere.

President Begaye knows his people would be healthier without the plant, but it’s so woven into the local and regional economy that, at first, he was determined to save it, and challenged President Trump to help him do it.

But since this winter, Begaye has pivoted away from his focus on keeping the plant open.

In his office near the arched sandstone rock formation for which the capital of Window Rock is named, Begaye sketched out a different vision for the future of the Navajo nation, a vision focused on new ways to diversify its economy.

“We are upgrading our entire infrastructure, we’re infusing money for small businesses,” Begaye said. “I’m getting our nation ready to make this transition.”

Ironically, for a man who recently wanted President Trump to subsidize coal, that transition includes moving toward cleaner energy.

Begaye has negotiated for the rights to transmission lines from the power plant so the Navajo reservation can sell its own power onto the grid if it builds solar or wind farms nearby.

“It’s forcing us to make a huge paradigm shift,” Begaye said. “So, that’s huge to me, to be able to rise out of this, like the phoenix, being more self-sufficient than ever before in the history of the Navajo nation.”

The power plant's owners and the Navajo government are close to finalizing a deal that will keep the plant operating through 2019, and leave the door open to new operators taking over after that.

But if the coal-burning behemoth in the middle of the desert does close for good, it will create a tough transition for the people who live in the small communities surrounding the plant.

“It’s not like back East, you know, where you can find other work nearby,” said Navajo Generating Station manager Paul Ostapuk. “People are working hard to see what the economic future looks like, but that’s a slow-moving process. So, short-term, there are no ready substitutes for the jobs that will be lost in this area.”

Like during many periods of economic transition, benefits in the future often come at the cost of pain and uncertainty in the present.