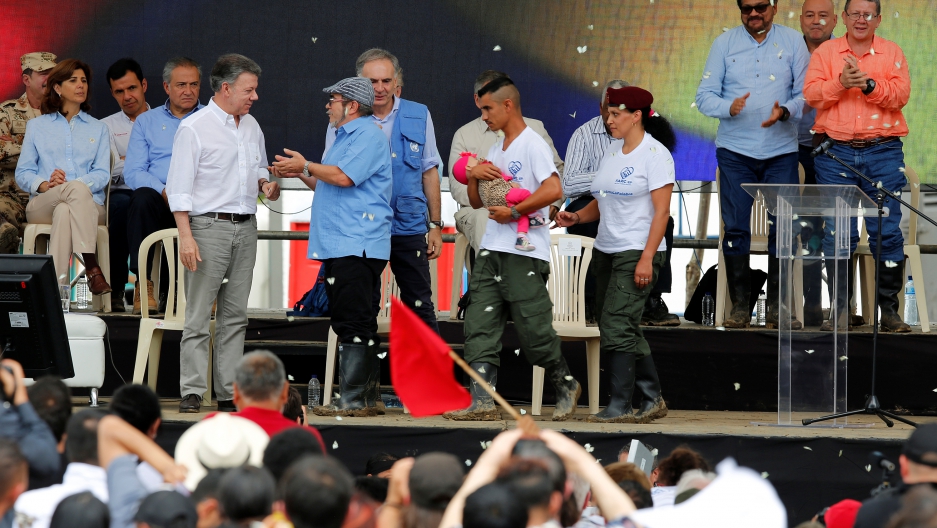 Colombia's leftist FARC rebel force declared its disarmament complete on Tuesday after half a century of war against the state, bringing an end to Latin America's oldest armed guerrilla force.

"Farewell to war. Farewell to arms, welcome to peace!" said commander Rodrigo Londono, alias Timochenko, in a speech in the central town of Mesetas, the group's historic base.

The move is a key part of efforts to end the territorial and ideological conflict under a 2016 peace accord.

The accord was narrowly rejected by Colombians in a referendum last year before it was redrafted and pushed through congress.

Since then, the process has been blighted by ongoing violence involving other armed groups.

United Nations monitors said Monday they "have the entirety of the FARC's registered individual arms stored away."

That excluded some arms that were exempted for transitional security at rebel demobilization camps until August 1.

"The laying down of arms is a symbol of the new country that we can be," he said in a speech following Timochenko's.

The former fighters are now due to make the transition into civilian life. The Revolutionary Armed Forces of Colombia (FARC) aims to transform into a political party after a congress in August.

Critics such as conservative political leader Alvaro Uribe said the peace accord was too lenient on FARC members.

Those accused of crimes in the conflict will be tried by special courts and some will get amnesties or reduced sentences.

The FARC has complained of delays in setting up the courts system to try some 3,400 of its members who it says are in jail.

"It is terrible that many of the guerrillas, militia members, supporters or those accused of belonging to our ranks are still in prison six months after the amnesty and pardon law was passed," Timochenko said.

The FARC launched its uprising in 1964 to fight for land rights and protection for poor rural communities.

The FARC has pledged to use its assets to compensate victims.

The accord promises land and credit lines for rural communities, with millions of dollars of investment.

"It marks the end of the main guerrilla group in the western hemisphere," said Jorge Restrepo, director of the conflict analysis center CERAC.

"It marks the beginning of the post-conflict period... and of a difficult process of reconciliation in the country."

The ELN started talks with the government in February, but has been blamed for ongoing confrontations with state forces and kidnappings.

Officials say remnants of right-wing paramilitary groups are also fighting the ELN for control of the drug trade.

Three women were killed at a shopping center in Bogota on June 17, in a bombing blamed on a fringe extremist group.

Norway, a sponsor of the peace process, cautiously welcomed the disarmament.

"It is very rare for a guerrilla force to give up its arms and prepare for a transition to civilian life," said Norwegian Foreign Minister Borge Brende in a statement.

"But even if the arms have been laid down, much remains to be done before we can be sure that the peace process has led to a durable peace."