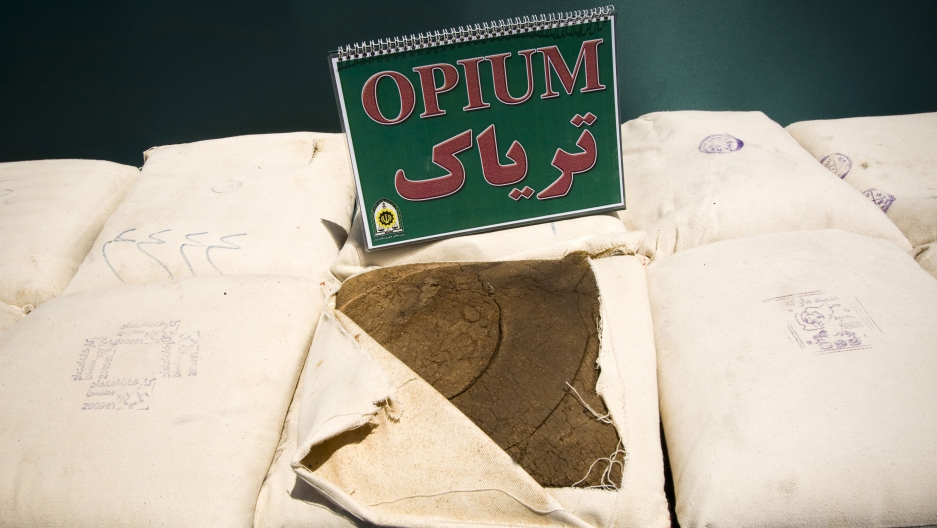 Confiscated opium displayed in Zahedan, Iran, on May 20, 2009, a time when the UN praised Iran for curbing the flow of smuggled heroin from Afghanistan and helping keep the drug off Western streets.

The number of drug addicts in Iran has more than doubled in six years, with opium the country's most popular narcotic, local media reported Sunday.

Citing experts from the health ministry, Iran's Welfare Organization and his own agency, Afshar said the number of drug users was up from 1.3 million six years ago.

He said opium made up 67 percent of consumption, with marijuana and its derivatives accounting for 12 percent and methamphetamine around 8 percent of the total.

"Opium is still the most popular [drug] and methamphetamine use has dropped significantly," he said.

Iran's neighbor Afghanistan produces some 90 percent of the world's opium, which is extracted from poppy resin and refined to make heroin.

Iran is a major transit point for Afghan-produced opiates heading to Europe and beyond.

Opium production surged significantly after the United States and its allies invaded Afghanistan in 2001 and overthrew the ruling Taliban.

Related: The US has waged a $7.6 billion drug war in Afghanistan, and now the problem is worse than ever

By its last year in power, the Taliban had slashed opium output to just 185 metric tons a year, according to United Nations estimates.

That is despite a decade of international efforts to stabilize the country and billions of dollars spent on persuading Afghan farmers to grow other crops.

The UN's crime and drugs agency said Thursday that the global narcotics market is "thriving" with opiates causing tens of thousands of avoidable deaths a year.