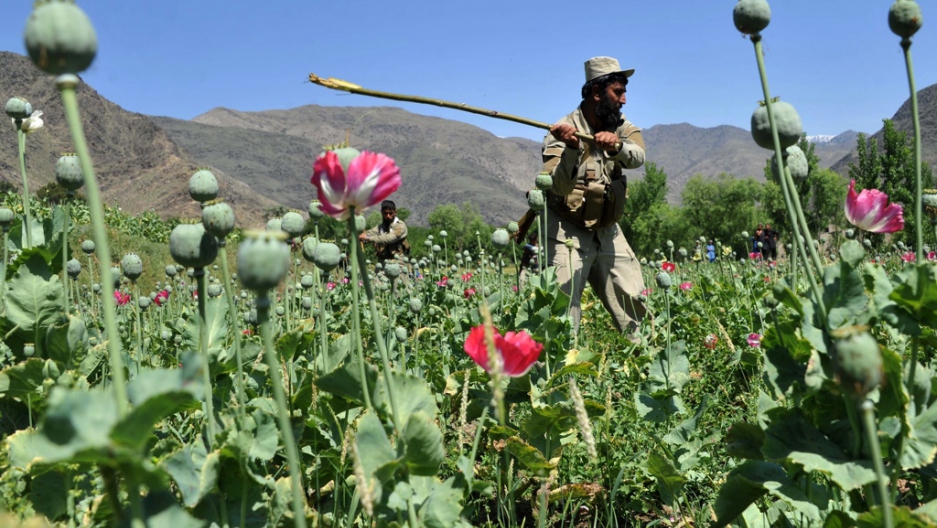 Update: Afghanistan’s opium poppies have hit another high in 2014: Poppy cultivation is up 7 percent and estimated opium production is up 17 percent over last year, the United Nations reports.

But Ghani has his work cut out. As he whittles away at corruption, economic problems, and the insurgency, he also has to deal with the ever-increasing problem of drugs.

The Office of the Special Inspector General for Afghanistan Reconstruction (SIGAR) released a new report on Tuesday that lays out the facts in stark detail:

• The US has spent $7.6 billion on counternarcotics efforts in Afghanistan over the past 12 years. Yet poppy cultivation has reached unprecedented levels, with more than 516,000 acres of the opium crop now planted.
• Previously “poppy-free” provinces are now growing it.
• Deep-well technology has allowed farmers to reclaim almost 500,000 acres of desert land for cultivation — most of which has gone for poppy.
• The value of the crop and its derivative products is estimated to be about $3 billion — up from $2 billion the year before. Proceeds from drugs fuel corruption and the insurgency.

“The recent record-high level of poppy cultivation calls into question the long-term effectiveness and sustainability of [prior US government and coalition] efforts,” John Sopko, the agency’s special inspector general, said in a letter to top members of Obama’s Cabinet. “Given the severity of the opium problem and its potential to undermine US objectives in Afghanistan, I strongly suggest that your departments consider the trends in opium cultivation and the effectiveness of past counternarcotics efforts when planning future initiatives.”

In other words, it ain’t working.

The Department of Defense (DOD) took umbrage at SIGAR’s evaluation. The real culprit according to Michael Lumpkin, deputy defense secretary, is the Afghan government.

“The failure to reduce poppy cultivation and increase eradication is due to the lack of Afghan government support for the effort," Lumpkin writes in a letter to Sopko that was included in the SIGAR report.

He also bristled at the suggestion that Defense may not be taking heed of past failures:

“The DOD always attempts to apply lessons learned,” he wrote, right before asking that Defense Secretary Chuck Hagel be removed from the distribution list “since the report provides no new information relating to our department.”

The State Department also voiced its objections, although more diplomatically, as is its wont.

More from GlobalPost: Afghanistan: The rise of a narco state

Charles Randolph, a program coordinator at the US Embassy in Kabul, allowed that the soaring poppy crop was “disappointing, as was the decline in poppy eradication by provincial authorities this year.”

“We look forward to the new Afghan government assuming a leadership role in this regard.”

Not their fault, either

The office of the presidential spokesperson did not immediately respond to requests for comment, but Ghani has long made his feelings known about drugs.

In his campaign manifesto, “Continuity and Change,” he addressed the problem of the illegal drug trade, calling it “a dark stain that has marked us.”

Those most to blame, he insists, are “international drug users and consumers,” who create the demand that stimulates supply. After them comes “the international mafia.”

It is these evildoers who “play a direct role in corrupting government, judiciary bodies and boosting anti-security forces” — in other words, Afghanistan is once again being victimized by powerful forces from outside.

The poor Afghan farmer is trying to make a living in a land with poor infrastructure and is, moreover, at the bottom of the chain when it comes to revenue: “The largest part of profits from drugs belongs to the international mafia, smallest to afghan farmers,” Ghani writes.

If the international community wants to get rid of the scourge of drugs, it should invest yet more billions in roads, market development and skills training.

Ghani, of course, has inherited a host of other problems, which he’s attempting to tackle with his renowned intelligence and prodigious energy.

He’s made more than 100 promises to fix them, and so far has fulfilled three, according to the watchdog website Impassion Afghanistan.

One achievement was signing the Bilateral Security Agreement with the United States, which outlines the terms under which the US will keep 10,000 troops in the country after the withdrawal of American and international combat forces this year.

But the pending items list includes: “working with religious leaders to eradicate poppy production and consumption” and “launch projects for marketing alternatives to poppy.”

These approaches have been tried before — alternative livelihood and public outreach were prominent components of the anti-drug programs designed and implemented by both the US and the British during their tenure in the country.

So far, Ghani has come up with nothing new.

Neither has the US. In his testimony before US Senate in January, William Brownfield, the assistant secretary for international narcotics and law enforcement affairs, outlined “future US counternarcotics efforts in Afghanistan.” They include capacity building for Afghan government bodies, drug treatment, and alternative livelihood development.

He did announce a new thing: a “food zone” for Kandahar province that he said will be “building on the successes and the lessons learned of the Helmand Food Zone.”

But the Helmand province program — involving wheat seed distribution and aggressive poppy eradication — has had its problems. Initial successes were followed by backsliding and a resurgence of the opium crop.

So far, it’s a standoff.

Ghani, perhaps, may be forgiven for his lack of initiative — it is only his fourth week in office.

But the US government has had 13 years to get it right. What’s its excuse?