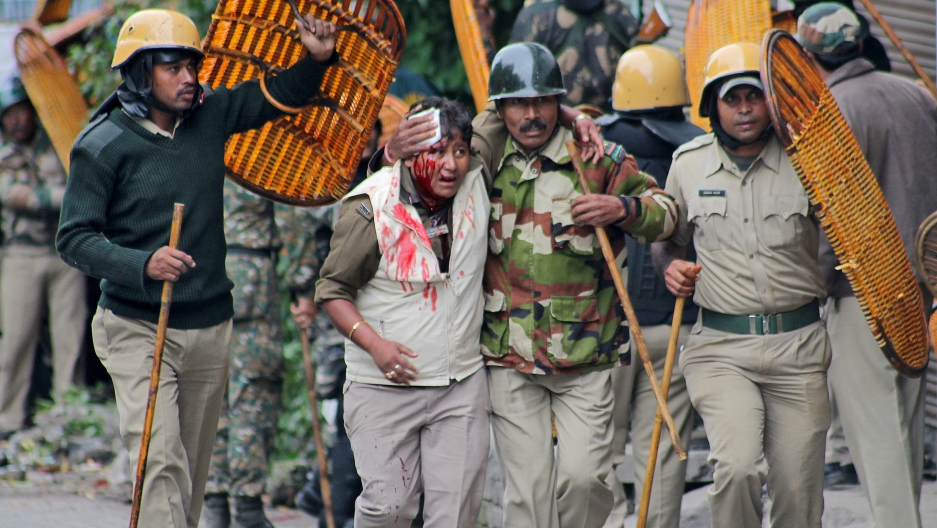 Police help an injured colleague during clashes with supporters of the Gorkha Janmukti Morcha (GJM) party during a protest to demand a separate state be carved out of West Bengal state, near Darjeeling, India June 17, 2017.

Protests that have shut down Darjeeling in eastern India threaten to derail the tea harvest just as the leaves are at their finest, industry experts warned on Thursday.

The picturesque hill station has been reeling from deadly separatist unrest that has forced shops and businesses to shut and caused tourists to flee.

Now tea makers say the unrest is preventing their pickers from turning up to work just as they were due to harvest the famed second flush — the finest and most expensive of Darjeeling teas.

"The strike couldn’t have come at a worse time. This is the peak second-flush output season," said Sandeep Mukherjee,  principal advisor to the  Darjeeling Tea Association.

"The ongoing unrest in the hill has added to the strain on the tea gardens in Darjeeling that are already reeling under the impact of climate change, a drop in global prices and high production costs."

A flush is the period where the tea plants grow new leaves that then have to be harvested.

Darjeeling has five flushes every year, but many drinkers believe the second, in June and early July, produces the finest tea.

Mukherjee said it accounted for around 40 percent of growers' annual revenue and any disruption could be disastrous.

Around 57,000 people are employed on estates in the hills of Darjeeling, which produces between eight and 10 million kilos of tea every year.

Dozens of people including police have been injured in the riots that have rattled the area for nearly two weeks.

The latest violence was sparked by a government proposal to teach the Bengali language in schools in the predominantly Nepali-speaking area.

But it is not a new dispute — the area has long been roiled by demands for a separate state called Gorkhaland in the hill region, which is now part of West Bengal.

"The indefinite agitation will result in loss of crop and quality," said Azam Monem, chairman of the Indian Tea Association, the largest tea producers’ body in India. "It will break the back of the tea industry in Darjeeling."