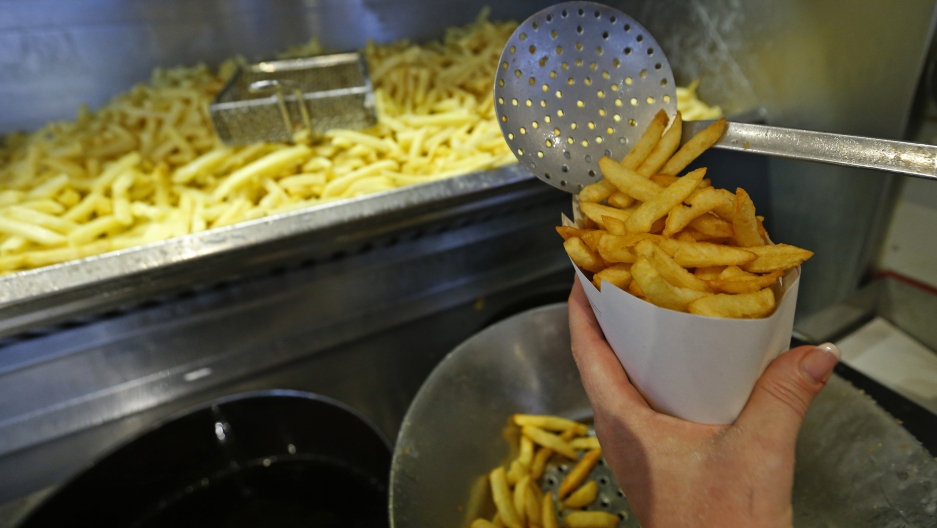 Carine Willaert prepares fries in the Maison Antoine frites stand in Brussels December 4, 2014. Belgian fries are traditionally sold, in a paper cone, in a "fritkot," generally a shack or trailer. There are some 5,000 of these in Belgium, making them 10 times more common, per capita, than McDonald's restaurants in the United States.

The European Commission staunchly denied Tuesday that it was trying to ban Belgian fries, saying Belgium's deep fried treat was too "chic" to fall victim to Brussels red tape.

The EU's vast bureaucracy was responding to questions over the fate of Belgium's famed chips if a proposed ban limiting the presence of a controversial chemical in food were to pass.

Acrylamide, which is being studied as a cancer-causing chemical, is produced during frying at high temperatures and is found at levels considered dangerous by some experts in potatoes and especially Belgian fries.

The Belgian recipe, which gives the chips their special flavour, requires double frying which increases the presence of the chemical.

It is important to "take cautious steps and not take any measures that have unwanted and far-reaching consequences for our rich gastronomic tradition," Weyts wrote.

Weyts feared that Belgian-style frying would no longer be possible under more stringent rules on acrylamide in food.

"The commission has no intention of banning Belgian fries or any other types of fries," commission spokesman Margaritis Schinas told a daily briefing.