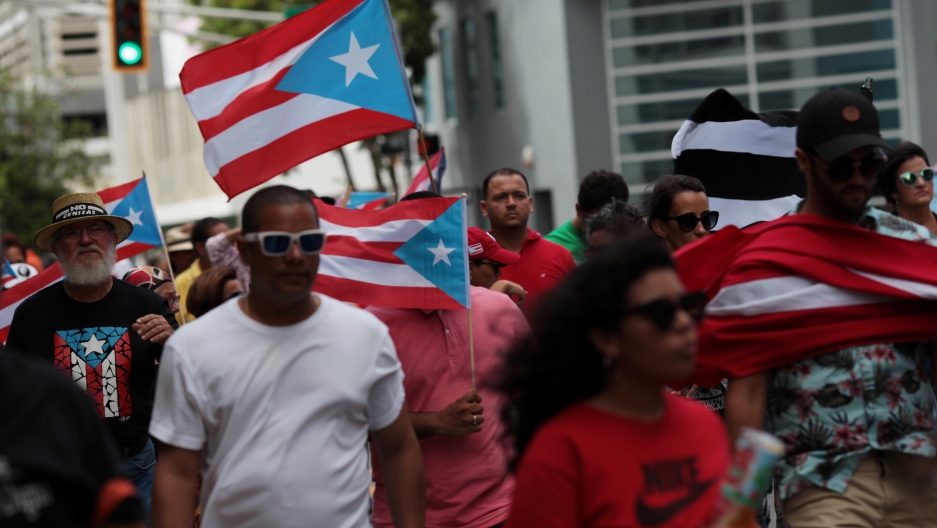 Puerto Ricans voted overwhelmingly Sunday to become a US state in a non-binding referendum — but the result was marred by an extremely low turnout after opposition parties called for a boycott of the poll.

With virtually all results in, 97.2 percent backed statehood, 1.5 percent supported independence and 1.3 percent opted for no change, but just 23 percent of the 2.2 million-strong electorate cast a ballot.

Despite the low turnout, Governor Ricardo Rossello vowed to push for the territory to become the 51st US state after casting his vote for statehood.

"We will go before international forums to defend the argument of the importance of PuertoRico being the first Hispanic state in the United States," Rossello said.

An unincorporated US territory under American control since 1898, Puerto Rico lacks sovereign powers — an urgent problem as it grapples with public debt of $73 billion and its economy stumbles.

Rossello, who heads the pro-statehood New Progressive Party, said his government would fight "in Washington and throughout the world" for the Caribbean island territory to be accepted as the 51st US state, and for Puerto Ricans to gain "all the same opportunities" as other American citizens.

The US Congress would need to approve any upgrade to statehood.

'Send a message to Congress'

The opposition Popular Democratic Party had said "statehood will win by a landslide" because of the boycott by opposition parties, which supported the status quo as a US territory.

The Puerto Rican Independence Party had called the vote a "farce."

But the Rossello government insists statehood is the answer to the financial crisis hanging over the island of 3.4 million, where some 45 percent of the population live in poverty.

After the votes were tallied, the Popular Democratic Party called the vote a waste of public money and a stinging humiliation for the government.

The ruling party "is a victim of its arrogance, abuse of power and ideological narcissism," said one of its senators, Anibal Jose Torres.

"I hope after 100 years of being a territory of the United States, we can send a message to Congress in the US that Puerto Rico is ready to do something with its future," said Marco Rodriguez in Guaynabo.

Puerto Ricans have been US citizens since 1917. But they are not allowed to vote in presidential or congressional elections unless they reside in the mainland United States. Sunday's referendum was the fifth on the territory's status — dating back to 1967.

The Rossello government has been criticized for spending $7.5 million on the referendum at a time when financial difficulties have forced it to close 163 public schools and cut back in other areas.

The question of status is "fundamental" to breaking free from economic turmoil, said Christian Sobrino, chief economic advisor to the government.

"It is because Puerto Rico is in an unequal relationship" with the US government that the bankrupt island's finances are now under a largely US-appointed control board, he told AFP.

A former Spanish colony taken over by the US at the end of the 19th century, Puerto Rico has enjoyed broad political autonomy since 1952 as a commonwealth or "free associated state."

As American citizens, often proudly so, Puerto Ricans can freely enter the US, live and work.

For decades the territory enjoyed a US federal tax exemption that attracted many American companies to set up shop — but those breaks were ended in 2006, prompting firms to leave the island en masse.

Beaten down by that loss in revenues and the global financial crisis, the island plunged into recession.

But the so-called "Caribbean Greece" found easy relief in US municipal bond markets, where investors could get attractive tax-exempt bonds that provided ready cash but sank the island deeper into debt.

The bubble ultimately popped and, unable to repay creditors, Puerto Rico declared bankruptcy in early May — the largest ever by a local US government.

Rossello has launched a drastic austerity regime to restore finances, but Washington still has the last word, via its oversight board.

Many islanders see the US authority as an intolerable stranglehold, especially considering that President Donald Trump has several times argued against bailing out the territory.