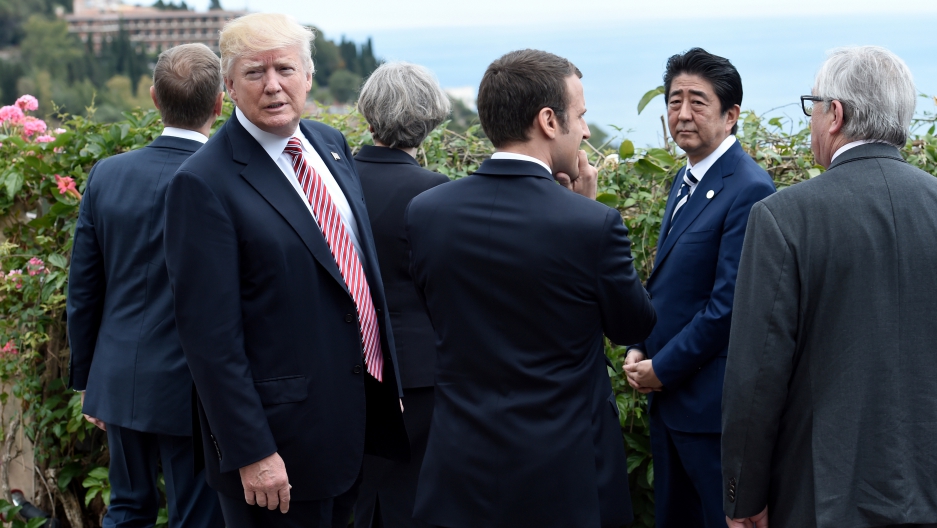 US President Donald Trump's performance at a "shocking" NATO summit has dealt a major blow to the alliance and may hand a win to Vladimir Putin, analysts say.

Whether shoving aside Montenegro's PM or having handshake wars with France's new leader, Trump created chaos at what was meant to be a diplomatic showpiece.

But optics aside, Trump failed to publicly endorse NATO's founding mutual defence guarantee and instead castigated the allies for failing to pay their way.

The contrast with an upbeat Mideast visit, including a trip to Saudi Arabia in which he did big deals with no mention of human rights concerns, was striking.

Ian Lesser of the German Marshall Fund think-tank in Brussels told AFP the failure to explicitly back the Article Five defence pledge "is going to be immensely disappointing to NATO leaders".

In a bitter irony Trump's rebuke to NATO came as he unveiled a memorial to 9/11, the only time that the Article Five defence guarantee has been triggered.

"This is a major blow to the alliance," tweeted Ivo Daalder, a former US ambassador to NATO.

"After calling NATO 'obsolete' Trump needed to say what every predecessor since Truman has said: The US is committed to Art 5."

It was under president Harry Truman that the United States launched the post-war World War II network of alliances in Asia and Europe with the establishment in particular of the North Atlantic Treaty Organisation.

On the campaign trail Trump worried transatlantic allies when he dismissed NATO as 'obsolete', and said he would weigh up whether a state triggering Article 5 if invaded had met its financial obligations.

But hopes that post-election Trump would use his first visit to Brussels to show his full commitment were dashed with a series of awkward incidents and harsh statements.

First he stared down new French President Emmanuel Macron during a white-knuckle handshake. Then he shoved aside Montenegrin Prime Minister Dusko Markovic, whose country is set to become NATO's 29th member later this year.

Trump reportedly told EU leaders that "the Germans are bad, very bad" because of their car sales, and was at odds with Europe's top official on Russia.

British Prime Minister Theresa May also took Trump to task over US intelligence leaks from the probe into this week's deadly Manchester bombing.

Finally, as aghast fellow leaders whispered amongst themselves, Trump blasted them for owing "massive amounts of money", leaving allies back in the uncertain space they were last year.

Trump's rhetoric sends a message "to Russia and the rest of the world that the US security guarantee to Europe is wobbly," Jan Techau, a foreign policy expert at the American Academy in Berlin, told AFP.

"Putin will be thrilled at Trump's refusal to endorse article five," said Thomas Wright, a fellow at the Washington-based Brookings Institution think tank, adding that it was "shocking and damaging" for NATO.

Questions swirled about why figures including US Secretary of State Rex Tillerson did not rule out before the summit at an explicit declaration of support.

"The question of the day is what on earth happened? Did Trump personally veto it? Or his advisors? Or was it never true?" Wright said.

The US and NATO were at pains to insist that Trump was committed, despite it all.

Trump spokesman Sean Spicer dismissed questions about the president's commitment as "almost laughable", pointing out that the 9/11 memorial is dedicated to Article Five.

NATO Secretary General Jens Stoltenberg meanwhile said after the summit that the president was being "blunt" but was "sending a strong signal" of his commitment by unveiling the 9/11 memorial.

The difference in tone could hardly be clearer however with the opening leg of Trump's tour in Saudi Arabia.

While in Brussels he berated some of America's oldest allies, in Riyadh Trump said he had a "tremendous" time as he signed multi-billion-dollar arms deals with Saudi Arabia's conservative rulers and took part in a sword dance.

Anne Applebaum, a visiting professor at the LSE Institute of Global Affairs, tweeted that it was "very striking that Trump made a point of 'not lecturing' the Saudis, and then arrived in Brussels and lectured Europeans."