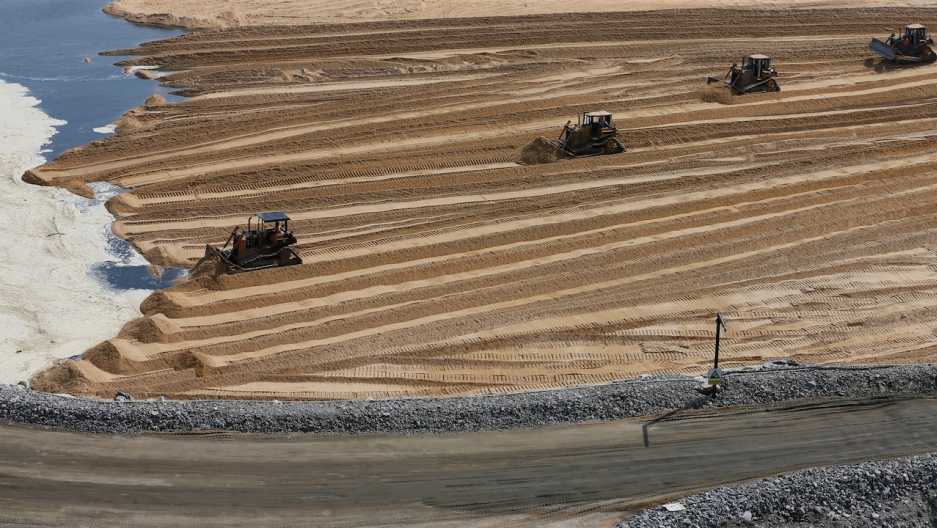 Bulldozers level sand dredged from the sea at the "Colombo Port City" construction site in Colombo, Sri Lanka, March 30, 2017. China is the main financial backer of the development.

No great power is complete without troops, warships and missiles sprinkled around the planet.

Now China is squeaking into an exclusive club — joining America, Russia, France, and few others in operating at least one military base thousands of miles from its home turf.

Behold China’s very first overseas outpost. It’s in Djibouti, a tiny African nation near Ethiopia. This small naval base is about the size of California’s Disneyland Park. It sits on a sun-roasted patch of desert scrubland off the Gulf of Aden, just off the Arabian Sea.

Historically speaking, this is huge. Chinese civilization, running millennia deep, is marked by isolationism — at least compared to Europe and America. Never before have the Chinese established a military post so far from home.

Those endeavors were left to European colonials, whose foreign garrisons enabled waves of plunder and subjugation that still define the world map.

Yet Beijing hardly sounds triumphant over this major step. Chinese officials, wary of casting colonial vibes, are downplaying the significance of the Djibouti post. In fact, they prefer not to call it a military base at all.

Beijing diplomats prefer to say it’s a “support facility” for weary Chinese sailors in the unruly region, which lies near chaotic patches of Yemen and Somalia. China’s navy helps to defend merchant ships in these formerly piracy-plagued waters.

China is eager to juxtapose its global ambitions with what President Xi Jinping calls the “meddling" West. It is instead diverting attention to its own wildly ambitious, world-altering project — advertised as a mission to boost harmony and wealth around the world.

That project is the clumsily named “Belt and Road” initiative: nearly $1 trillion worth of roads, railways and ports physically linking China to Europe, Africa and the Middle East. This so-called “21st-century maritime silk road” would help give rise to the largest infrastructure endeavor in human history.

Beijing is now promoting these plans with a theme song, performed by a multinational group of singing kids. (Warning: this song includes a bespectacled child rapping about infrastructure.)

But sing-alongs won’t help China defend the new tendrils of trade and infrastructure it is now shooting across the seas. For that, the nation will need more raw power.

It’s at the far western end of the Indian Ocean, an aquatic zone China is keen to dominate commercially.

This is well underway. Chinese vessels already ship more cargo than any other nation — and according to the Financial Times, two-thirds of all shipping containers pass through ports that are owned partially or fully by Chinese companies.

Attack this trade and China’s export-centric economy would crumple. Beijing is intent on defending these routes — particularly in the waters off Djibouti. All boats traveling from Asia to Europe (and vice versa) must pass through this sea.

Djibouti — a bustling oligarchy about the size of New Jersey — is also a low-stress location for China to kick-start its naval base expansion. The government is accustomed to foreign troops: America, France and even Japan have military bases there. China has courted Djibouti’s government with $14 billion worth of investment. This includes two major ports.

“Both in theory and in practice, military power follows commercial interest,” says Peter Dutton, director of the China Maritime Studies Institute at the US Naval War College.

There are three strong candidates: Pakistan, Sri Lanka and Myanmar.

So says Dutton, who has closely studied Chinese naval strategy. Place outposts at all of those locations (plus Djibouti) and you’ve got the entire Indian Ocean covered.

China has already constructed major ports in each of these countries. Following the Djibouti model, the military could simply outfit these ports with barracks, helipads and naval piers.

A Chinese-operated mega-port in Pakistan — right off the Arabian Sea — is already becoming militarized. China’s and Pakistan’s navies now jointly defend the port, which may also take on Chinese marine brigades.

Depends who you ask.

Chinese rhetoric is quite contemptible of America’s bloody foreign interventions. As one state-run paper opines: “It is a painful reality that the US has left too many places in chaos … as people are witnessing now in Iraq, Syria and Libya.”

That China is opening its first base in far-flung Djibouti is owed to the total encirclement of its Pacific coastline by massive American bases. Its ongoing mission to build little outposts in the South China Sea — which US President Donald Trump erroneously calls a “massive fortress” — has been threatened repeatedly by the US Navy.

But Beijing is keen to project itself as a benevolent merchant power with no colonial baggage. This is true to a degree.

The “maritime silk road” is largely about selling Chinese stuff to long-neglected markets in the Indian subcontinent and Africa — and there’s nothing sinister about that. If you want to buy bargain sneakers in Addis Ababa or cheap toothpaste in Karachi, China is here to help. 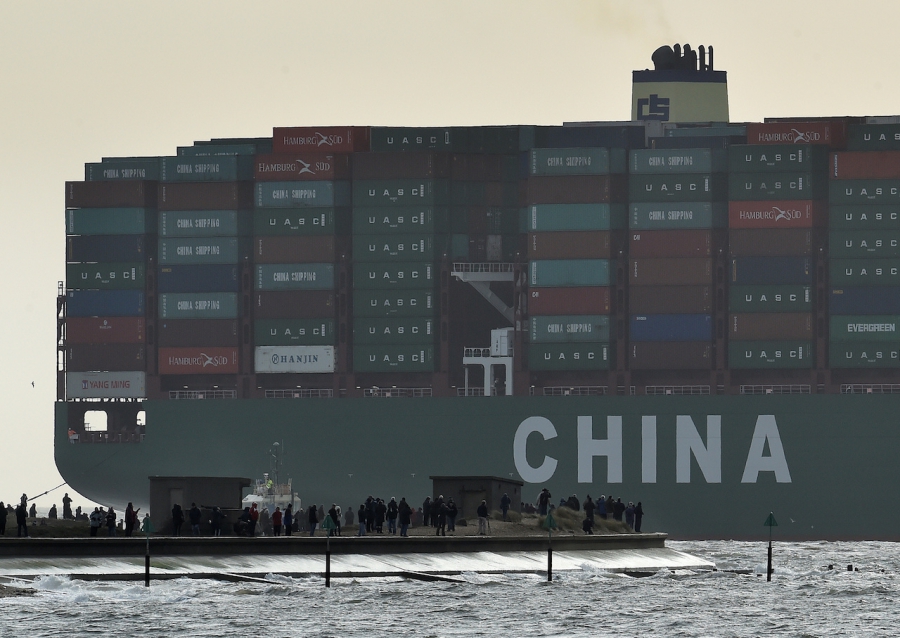 Onlookers watch from a harbor wall as the largest container ship in world, CSCL Globe, docks during its maiden voyage, at the port of Felixstowe in England, January 7, 2015.

“The Chinese narrative is all about peace and trade,” Dutton says, “and there’s a strong element of truth there. But it’s not the whole truth.”

“China says it’s never been a colonial power that positions its military abroad,” he says. “That’s accurate in a narrow sense in that it has never used its navy to develop colonies.”

“But it you’re a Uighur or a Tibetan,” Dutton adds — two peoples adjacent to Han Chinese native lands who are badly oppressed — “then you might not agree with the statement that China never attempts to colonize other nationalities. Historically, China projects its power over the land.”

Could the Chinese navy ever catch up to the US?

That would take a very long time.

The US military devours a staggering $622 billion per year — more than four times the Chinese military budget. Much of its power is deployed over the world’s oceans to serve, as the US Navy is fond of saying, as a “guarantor” of open seas, preventing the oceans from devolving into many patches run by local powers or, worse yet, pirates.

“The United States’ military power is as strong — if not stronger — than it ever has been,” Dutton says. But in Asia, despite its dominance, US naval power is nevertheless eroding.

China’s navy is the fastest growing in the world and, within decades, should prove highly capable of backing down American threats in its near waters. In farther seas, it will increasingly expect the US to back off and respect its right to defend the oceanic arteries that pump economic life into the country.

And while Beijing’s diplomats preach harmony, there is an undercurrent of nationalism running through its officialdom — and a desire to be recognized as a fearsome global power.

This was a message, conveyed through PRI in February, to the Trump-era US State Department following repeated US threats to blockade island bases in the South China Sea.

Chinese nuclear warheads, Shen says, are “300 times as powerful as the Hiroshima and Nagasaki bombs. Maybe [US Secretary of State] Rex Tillerson doesn’t know this. So we’ll let him know it.”

The World's Patrick Winn is based in Bangkok, Thailand.

Editor's note: Due to an editing error, an earlier headline appearing with this story on some platforms mischaracterized the Chinese military base in Djibouti as "open." It is still under development.