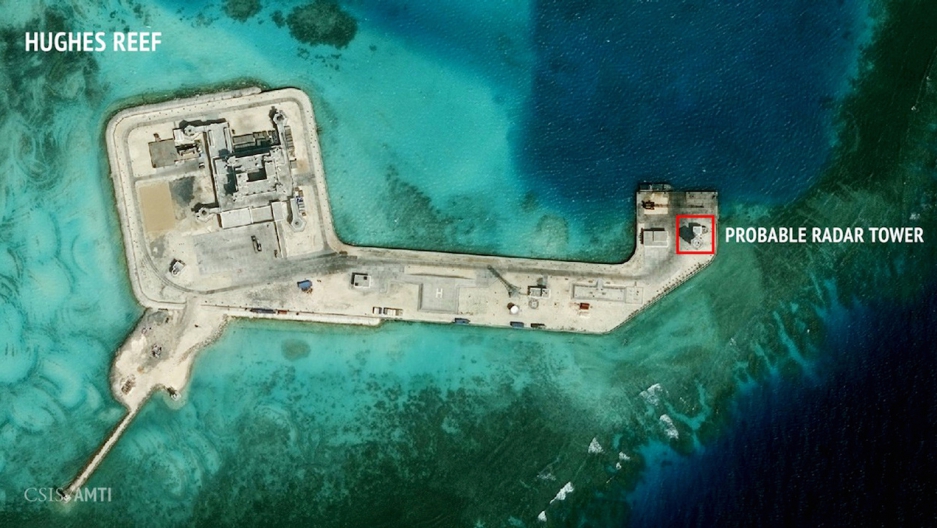 A satellite image released by the Asian Maritime Transparency Initiative at Washington's Center for Strategic and International Studies shows construction of possible radar tower facilities in the Spratly Islands, in the disputed South China Sea, in this image released on Feb. 23, 2016.

But “massive” they are not.

As his inauguration nears, Trump appears to be deliberately scrambling US-China relations. The same man who accused China of economically “raping” the United States is laying out — in interviews and tweets — a more hostile approach toward the world’s largest nation.

Did China ask us if it was OK to devalue their currency (making it hard for our companies to compete), heavily tax our products going into..

their country (the U.S. doesn't tax them) or to build a massive military complex in the middle of the South China Sea? I don't think so!

In portraying China as a conniving menace, Trump has repeatedly accused the nation of creating a “massive fortress” in the South China Sea.

This is rooted in truth. China is building up tiny island bases, armed with missiles, in waters that are vital for the world’s economy.

More than $5 trillion worth of trade churns through these waters. The US, which accounts for one-fifth of that traffic, is not keen on letting China dictate who can and cannot pass.

But Trump’s warnings of a “military fortress the likes of which perhaps the world has never seen” are bluster. What China is building in its aquatic backyard is not some saltwater Death Star.

Given the stakes — a potential armed conflict between two great powers — such hyperbole can only aggravate an already volatile feud.

So, let’s break down what’s really going on here.

Are we sure these island fortresses are not ‘massive’?

Yes, we are. For starters, the islands occupied by China are specks. The largest one is about half the size of New York’s Central Park. The second-largest is tinier than Beijing’s Forbidden City.

It’s true that China is furiously dumping sand at the perimeter of seven islands. But so far, according to the Asia Maritime Transparency Initiative, they’ve added roughly 5 square miles’ worth of land.

How well are these bases armed?

They’re equipped with radar emplacements that monitor traffic on and above the sea. There are some fortified aircraft hangars and a few long runways that can accommodate fighter jets.

China has also created small island specks that the Asia Maritime Transparency Initiative says may be fitted with anti-aircraft guns. In its most audacious move, China upped its defenses earlier this year with missiles that can blow aircraft out of the sky from 125 miles away.

As one defense expert previously told PRI, these weapons, called HQ-9 missiles, can be seen as “agile kings on the checkerboard landscape.” They’re both powerful and mobile. And they’re certainly capable of destroying US surveillance drones, a persistent irritant to China’s military.

But missiles alone do not constitute a “massive fortress.” America’s most advanced fighter jet, the F-22 Raptor, could be expected to take out these missile embankments in a conflict. This explains why the US is deploying these cutting-edge jets to Australia as a message to China.

How is China responding to Trump?

A state-owned paper, beholden to China’s Communist Party, says that “we can’t be frightened by Trump’s bully-boy tactics and picture him as a rival that is so hard to defeat.”

Yet another government-issued op-ed suggests China should “dare to make surprise moves” to shake up the US-China relationship.

This is more than mere insinuation. Following Trump’s recent contact with the president of Taiwan, seen by the Communist Party as a rogue prefecture, China flew bomber jets over the South China Sea. This was interpreted as a message to America.

How strong was this signal? Well, many outlets have claimed that these Chinese jets are capable of launching nukes — but that too appears to be dangerous hyperbole.

According to Jeffrey Lewis, an expert on nuclear proliferation, the jets aren’t able to fire nukes. He contends that China was merely indicating it could blast targets in the sea with more conventional cruise missiles — the sort of missiles Russia fires into Syria and which the US recently fired into Yemen.

No, China's H-6 bomber is not nuclear-capable. A tweetstorm about why it matters for signaling and stability. (1/25)https://t.co/dH7fTdHDCT

Does China have the unqualified right to build these bases?

Beijing claims practically all of the South China Sea as “blue national soil.” That is a bold assertion considering that the sea’s waves wash up on several other nation’s shores — namely Vietnam and the Philippines. Both countries have strong claims to remote islands that China now effectively dominates.

But China is undeterred. Even a United Nations tribunal, which rejects Beijing’s sea claims, has not scared it away from plans to gain control of the sea in the 21st century.

The worst-case scenario: live-fire conflict between the United States and China.

Just as China asserts its refusal to budge, the head of the US Pacific Command is warning that “we will cooperate when we can but we will be ready to confront when we must.”

The fallout from such a confrontation could be devastating. This potential clash between powers — one ascendant, one reeling from chaotic political transition — would be felt across the planet. Their economies intertwined, the two countries could bring down the global order if they clash. It bears repeating that both are nuclear powers.

Overstating China’s little outposts as “massive fortresses” only ratchets up the tension. In July, China was already warning that “there is no guarantee that an escalating war of words will not transform into something more.”

Now that America is set to inaugurate Trump, a president-elect who has lashed out at China more than any other in history, that war of words is getting hotter.