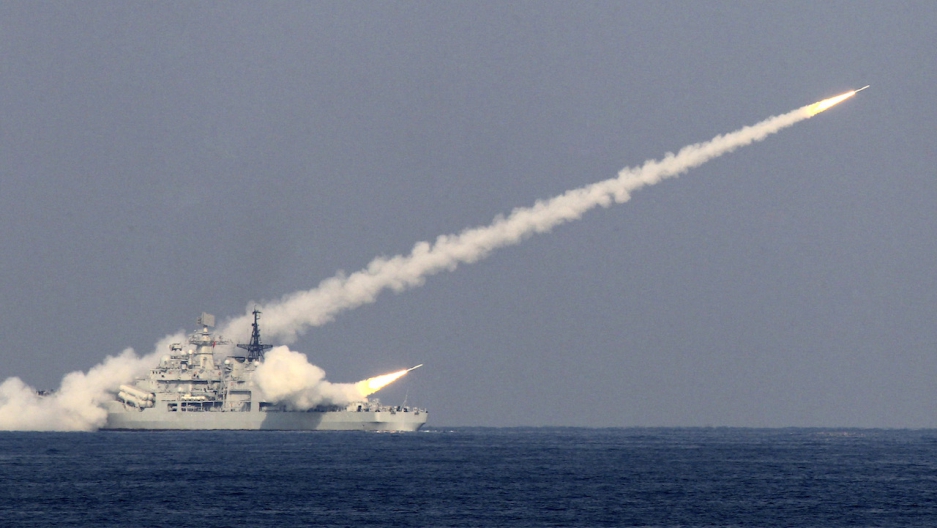 Guided missiles are launched during a drill of the North Sea Fleet in Qingdao, Shandong province, in 2013.

Let's start with the good news. Both the United States and China are probably too sane to risk enflaming the world in a devastating war.

So let’s hope their sanity holds. Because there are reasons to worry.

Under President Donald Trump, the White House has repeatedly threatened to block Beijing from fortifying tiny islands in the South China Sea.

The new secretary of state — former Exxon Mobil chief Rex Tillerson, now in his first government job — proclaimed that China’s “access to those islands is not going to be allowed.”

Those are serious fighting words.

China is hell-bent on building island outposts throughout this barren expanse of saltwater. The US contends that China has no right to militarize this sea, among the world’s vital trading routes. The White House keeps vowing to stop them.

That would require a military blockade, which is an act of war. In fact, Beijing warns that if the White House goes beyond “rabble-rousing” and honors that promise, it should prep for “large-scale war.”

Here’s a guide to how that potential war might play out. The following is based on interviews with experts who have insight into military thinking inside the Pentagon and the People’s Liberation Army.

First, a big caveat: this war is highly improbable

“The prospect of war remains remote,” says Timothy R. Heath, senior international defense analyst with the RAND Corporation, which provides intelligence to the US military and others.

Both Trump and his Chinese counterpart, President Xi Jinping, have hinged their success on economic revival — and a war would eviscerate both economies.

“I do think the [US] government takes serious the dangers of war,” Heath says, “and is not looking to start one.”

Moreover, China is among the few nations on Earth that can lay waste to the American heartland, says Shen Dingli, a physicist and weapons expert with Shanghai’s Fudan University.

“China can now destroy the United States repeatedly. Ten times over,” Shen says. He cites the recent test launch of a Chinese rocket, the DF-5C — a long-range missile that can pack 10 different nuclear warheads.

Brandishing this missile, as the country did last month, should “educate” Tillerson on China’s power, Shen says. (Its dummy warheads appear to have landed in a Chinese desert.)

“Its warheads are 300 times as powerful as the Hiroshima and Nagasaki bombs,” Shen says. “Maybe Tillerson doesn’t know this. So we’ll let him know it.”

Defense Secretary James Mattis, Shen says, is considered far more prudent in Beijing’s eyes. “As a general, he’d have a responsibility to fight a war and win. And he will not fight a war he cannot win.” 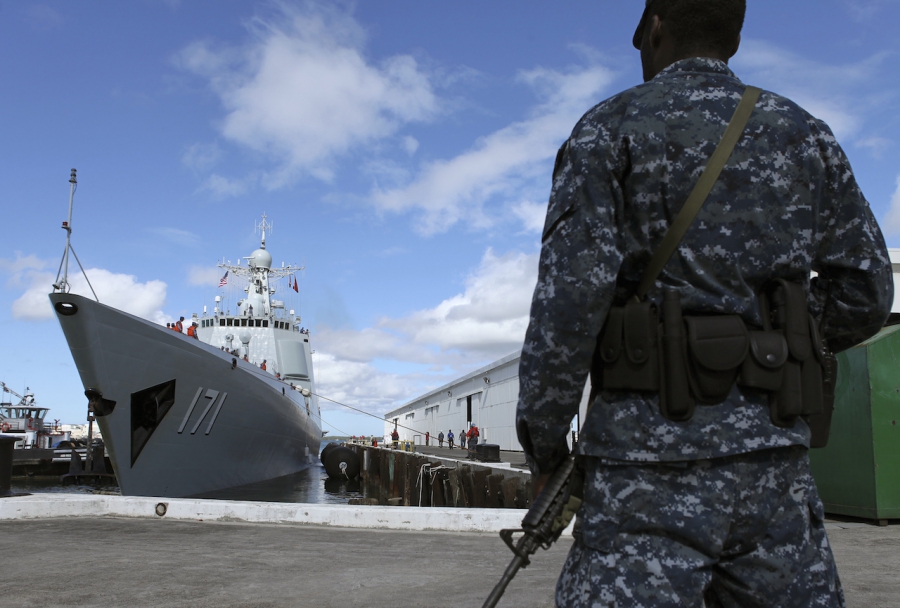 The Chinese People's Liberation Army Navy guided missile destroyer Haikou (171) arrives at the Joint Base Pearl Harbor Hickam to participate in the multinational military exercise RIMPAC 2014, in Honolulu, on June 24, 2014. RIMPAC is the world's largest biennial naval exercise between the US and Pacific Rim nations.

Think air and sea attacks, not nukes or land invasions

“Even in an intensely violent conventional conflict, neither side would regard its losses as so serious, its prospects so dire … that it would run the risk of devastating nuclear retaliation.”

This is among the major findings of a RAND report written last summer.

Titled “War With China: Thinking Through the Unthinkable,” it offers a play-by-play of a potential US-China war.

For the most part, experts believe the war would be waged with fighter jets, warships, submarines and cyberattacks. Not tanks or grunts storming beachheads.

That doesn’t mean the war wouldn’t be brutal. The RAND report’s authors — including David Gompert, a former US Director of National Intelligence — believe any US-China war would be “horrific.”

From the report: “War between the two countries could begin with devastating strikes; be hard to control; last months, if not years; have no winner; and inflict huge losses on both sides’ military forces.”

To triumph, China would need to strike first

The People’s Liberation Army lags behind the US military in almost every technological respect.

China’s submarines are less stealthy. Many could be easily picked off by rival American subs. Same goes for Chinese warships. They’d be sitting ducks.

China is also unwieldy when it comes to refueling fighter jets in midair. That’s a setback that would prevent a truly unrelenting bombing run on US bases in South Korea and Japan.

The PLA would need to unleash a surprise storm of missiles targeting as many American warships and air bases as possible. Because once the US military scrambled to attention, it would brutally pummel China’s ships and jets — starting with the more modern fleets.

The US could then retreat to deeper waters, beyond the reach of most Chinese ballistics, and lob missiles from afar. China would have nowhere to hide — except for its vast underground lair.

China would rely on semi-secret tunnels

Beijing would be keen to protect its most sophisticated and lethal hardware from that initial American onslaught. So to maintain the element of surprise, it might squirrel away a secret cache of missiles and aircraft inside a complex tunnel system.

These tunnels, known as the “Underground Great Wall,” span an estimated 3,000 miles, according to a study by the Federation of American Scientists.

As the war raged on, China could sneak its best hardware out of hiding, launch more surprise attacks and try to catch the US off guard. 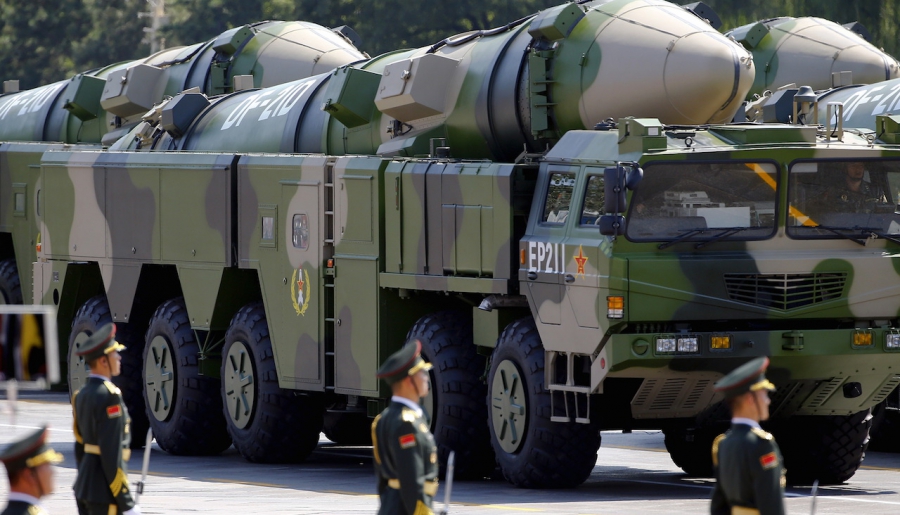 Military vehicles carrying DF-21D ballistic missiles roll to Tiananmen Square during a military parade to mark the 70th anniversary of the end of World War II, in Beijing, on Sept. 3, 2015.

The war would be really, really expensive

Most analysts who’ve studied this potential conflict are soothed by the entanglement of the US and Chinese economies.

“Trump wants the US to be great, to make money, to be strong,” Shen says. “Conflict with China would make the US not great, not wealthy and definitely not secure. He won’t do it.”

But if financial forces fail to ward off conflict, war could hemorrhage both economies. According to RAND, just a single year of war could see the US economy lose 5 to 10 percent of its gross domestic product. That’s well over a trillion dollars.

As for China? RAND believes its GDP would fall by 25 to 35 percent. Such a staggering drop could undermine the authority of the state.

The world economy would suffer badly

In wartime, Americans would say goodbye to “Made in China” products. But the US — blessed with two oceans — could likely muddle through by trading with the rest of the world.

China, meanwhile, might be starved of its ability to trade with much of the world. The nation’s export-driven economy relies on cargo ships safely chugging back and forth to its port cities.

If war raged through its nearby seas, the vital traffic would slow to a trickle — and China’s global trade would suffer.

The current climate is eerily familiar

The reward for striking first, faith that economic forces will promote a sober calm — it all sounds a bit like the climate preceding World War I.

From the RAND report: “Such conditions recall those of Europe in 1914, when a crisis triggered near-automatic execution of military plans to attack before being attacked, when the economies of the two sides were interlocked, and when both foresaw a short war.”

In the past week, Trump and Xi have attempted to reconcile. After preinauguration overtures to Taiwan, Trump recently indicated he will respect the one-China policy that only recognizes a Chinese government in Beijing. Many US presidents, Heath notes, have started off with “harder-line policies regarding China” but later softened their positions.

Still, the South China Sea will remain primed for conflict for the foreseeable future. This will require Trump and his team to remain levelheaded for years, not weeks.

In military circles, the “strike first” option may sound more urgent as China’s military prowess grows. It may also appeal to those who believe a US-China war is inevitable.

Among them: Steve Bannon, the White House’s new chief strategist. Just last year, he declared that “we’re going to war in the South China Sea in 5 to 10 years. There’s no doubt about that.”