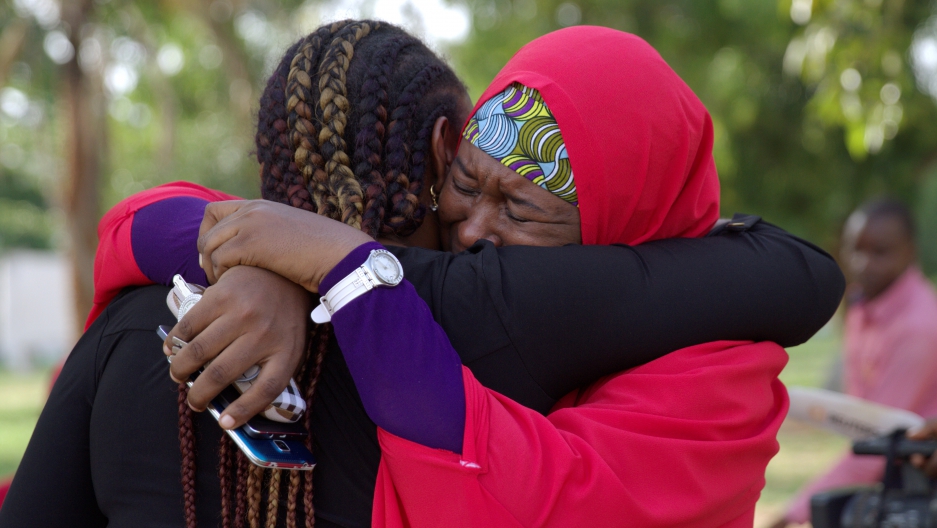 Members of the #BringBackOurGirls campaign embrace during a demonstration in Abuja, Nigeria, May 18, 2016.

After the release of 82 girls from Boko Haram captivity was announced this month, several of the missing girls’ parents set off from their remote hometown in northeast Nigeria to Abuja, the capital, to see the girls in person. The three represented parents of more than 200 girls kidnapped in April 2014, who have formed an association to work with the government and others for their release.

A few days later, the parent representatives headed back to Chibok — a journey that takes more than 24 hours by road — with a stack of photographs. The last time a group of the girls was released, in October, spelling errors misidentified some of them, which led to parents turning up in Abuja when their daughters were not actually among the freed.

This time, families of the missing girls will first identify their daughters with the aid of the photographs sent to Chibok. Those certain that their relatives are among the released will then leave for Abuja this Friday to be reunited with them.

But the reunion will be brief. The girls still can't go home. They are being kept in government custody for ongoing debriefing, and there's no word yet on when they may be let out.

Hundreds of relatives in Chibok have now been waiting years for word on their daughters and sisters.

Yana Galang is one of the parent leaders who met with the released girls in Abuja earlier this month, tasked with carrying their photos back to Chibok. Galang is doing this work in the midst of deep disappointment that her own daughter, Rifkatu, was not among the released.

“We will gather the parents together … to show them the photographs,” she said last week. “They all live in different villages that are far apart so we can’t reach all of them immediately."

Zannah Mustapha, the 57-year-old lawyer who has been negotiating between the Nigerian government and Boko Haram, recently told the media that some of the kidnapped girls still held by the terror group don't want to return home.

Galang says she also heard this from some of the released girls she met with — but she’s hopeful the captives who want to stay with Boko Haram will change their minds.

"The released girls told me the names of at least five girls who say they do not want to come back home,” she said. “They say that they are newly married. But, with God, all things are possible."

Galang said she did not plan to share the names of the girls who don't want to come home with their parents, so as not to upset them.

As soon as Philip Yama heard that the association officials had returned from Abuja, he rushed to Galang’s house. The 43-year-old tailor was eager to confirm whether his younger sister was among the released. Margaret, 21, had lived under his care before she was abducted. He paid her school fees, and she was like a big sister to his four young children.

Yama could hardly contain his delight when Galang handed him the photo of a tall, dark young woman, who was undoubtedly his sister. He and Margaret are spitting images of one another.

"I went to the market and bought flour to make some cakes for her, and also some groundnut cakes and chinchin [a fried snack], things I know she has not eaten in a while. My wife will cook it, and we will take it to her,” Yama said Friday, eager for the trip to Abuja this week that will reunite him the girl he last heard from three years ago when she phoned home to say Boko Haram had invaded her school.

But, there is an aspect of the reunion with his sister that worries Yama. Their mother died a year after Margaret was abducted, and he is reluctant to break the bad news to her.

"I will tell her, but not this time around,” he said, explaining that he plans to fabricate a reason for why his mother could not make the trip to Abuja. “If I tell her now, the trauma will be too much. I will tell her after some months."

Yama believes that the illness which led to his mother’s death was brought on by worry over the abduction of Margaret and his cousin, Asabe, who also lived in his house. Asabe was among the earlier batch of 21 girls freed by Boko Haram in October 2016.

"My mother was well before the kidnapping. Because of Margaret and Asabe, that is why she developed sickness," he said.

Samuel Yaga and his wife Rebecca live in Abuja, but their daughter is also among the girls kidnapped from Chibok. They’ve seen photographs of the released girls published in the media. They were not able to identify Sarah among the faces but are confident that she will come home to them one day.

There have long been concerns that the Chibok girls might be radicalized while in captivity. The stigma of their ordeal could also be a factor for girls hesitant to return.

Yaga, however, dismisses accounts that some of the girls refuse to return home, insisting that this must be a rumor started by politicians with unknown motives.

"How can the girls say they don't want to return home?" he said. "If they really said that, then it means that their heads are not correct, that something is wrong with their thinking."