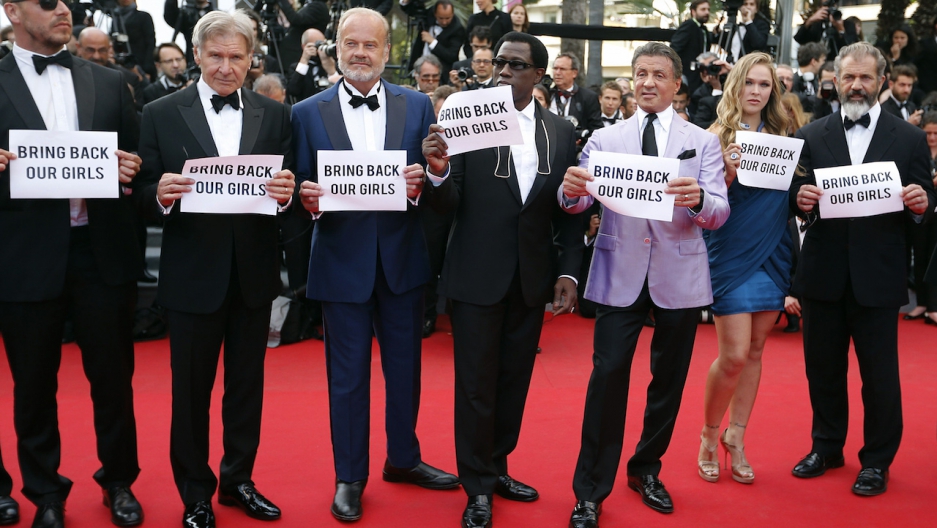 Actors hold placards in support of the Chibok girls in Nigeria as they pose on the red carpet during the 67th Cannes Film Festival on May 18, 2014. From left, Jason Statham, Harrison Ford, Kelsey Grammer, Wesley Snipes, Sylvester Stallone, Ronda Rousey, Mel Gibson.

The global #BringBackOurGirls campaign is a great example of how a noble cause can backfire.

The abduction of over 200 girls from their school dorm in Chibok, Nigeria, by Boko Haram militants in April 2014 could have been an opportunity for the world to clamor for the release of the thousands of women and girls the insurgents have kidnapped in northeast Nigeria. Instead, it focused only on the Chibok schoolgirls and made celebrities out of them. That was a mistake.

The Chibok girls’ names and faces were displayed in strategic locations around Nigeria’s capital city, Abuja, and during protest marches from Paris to New York. Some schools in Nigeria asked each student to select the name of one missing Chibok girl and pray every day for her return. A list of the girls’ names were displayed in newspapers and on large screens during humanitarian events.

That fame is now the greatest obstacle between the Chibok girls and a normal life after captivity.

In May 2016, Amina Ali Nkeki, the first of the missing Chibok girls to be seen after over two years, was rescued by the Nigerian military. She was flown VIP-style, by helicopter, to meet with President Muhammadu Buhari in Abuja. The international media was invited to the ceremony. In October, 21 Chibok girls were freed by Boko Haram in a deal brokered by the Swiss government and the International Committee of the Red Cross. They were also feted in Abuja. Subsequently, two more Chibok girls were found by the military.

But, months after the cameras were turned off and the curtains drawn, the girls remain in government custody. None of them have been allowed to return home to their families in Chibok.

Thanks to the #BringBackOurGirls campaign, so famous are the girls that the Nigerian military says it cannot guarantee their safety if they go home. Any other girl rescued by the Nigerian military can walk the streets freely, but the government is unwilling to risk the international uproar that would definitely accompany the re-abduction of a Chibok girl.

The Chibok girls’ celebrity status also seems to have played a part in their continued captivity. Released Chibok girls describe a peripatetic life, constantly on the move with the militants. Some unsung rescued girls I’ve interviewed described, in contrast, being abandoned as the militants fled the approach of the Nigerian army. In some cases, the militants aimed stones at the women and girls, considering them a burden to take along as they fled, preferring to have them killed rather than freed.

Clearly, the militants knew better than to abandon their valuable merchandise and their claim to fame. The Chibok girls also say that they were fed plentifully until food ran out some weeks before they were released; given fabric to sew new clothes for themselves; and provided medical care from doctors whenever they were ill — treatment that is the complete opposite of that described by the average girl in Boko Haram captivity.

Without a doubt, the world meant well when it rallied round the #BringBackOurGirls campaign and called for the release of the Chibok girls. No one could have meant to create this problem for the girls and their families. But, the next time an opportunity arises to support a cause in Africa, let us all pause and think, and plan and consider, before jumping on the bandwagon and rushing to tweet.

Adaobi Tricia Nwaubani is a journalist and author based in Abuja, Nigeria.