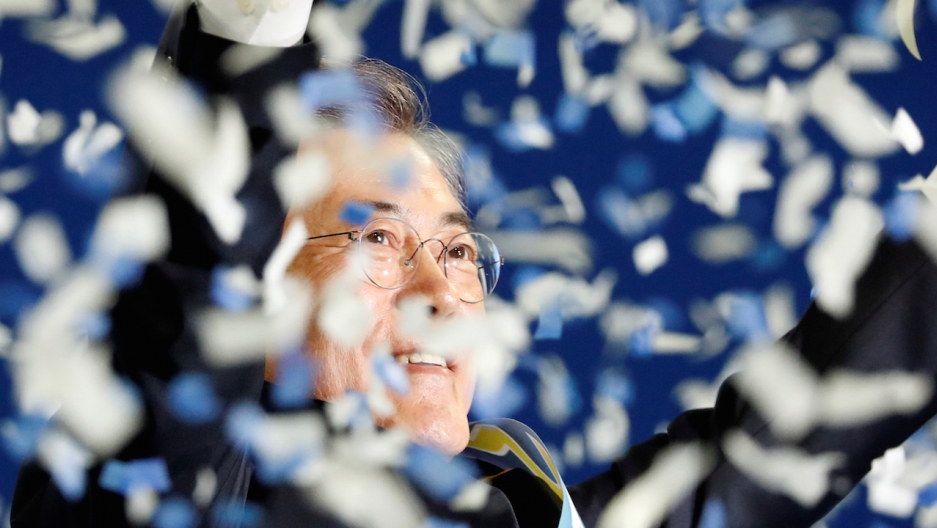 Moon Jae-In celebrates after winning the nomination as a presidential candidate of the Minjoo Party, during a national convention in Seoul, South Korea, April 3, 2017.

Left-leaning former human rights lawyer Moon Jae-in won South Korea's presidential election by a landslide Tuesday, according to official figures, sweeping to power on a yearning for change after a tumultuous scandal.

The ballot was needed after Park Geun-hye was ousted and indicted for corruption, and took place against a backdrop of high tensions with the nuclear-armed North.

Voters were galvanised by anger over the sprawling bribery and abuse-of-power controversy that brought down Park, which catalyzed frustrations over jobs and slowing growth.

They gave Moon, of the Democratic Party, who backs engagement with the North, 40.2 percent support — some 11.4 million votes — according to the National Election Commission (NEC).

Conservative Hong Joon-pyo — who dubs Moon a "pro-Pyongyang leftist" was far behind on 25.2 percent, with centrist Ahn Cheol-soo third on 21.5 percent.

Fewer than 4.2 million votes cast in the election were still to be counted and the NEC was expected to name Moon the president-elect after its official vote count was completed.

The result was "a great victory of great people" who wanted to create "a country of justice ... where rules and common sense prevail," Moon told cheering supporters on Gwanghwamun Square in Seoul — where vast crowds gathered for candlelit protests over several months to demand Park's removal.

The graft scandal plunged the country into political turmoil and bitter division, but Moon promised healing, telling the crowd: "I will be president for all South Koreans."

On the square among the crowd, Koh Eun-byul, 28, told AFP: "I am so happy because now there is hope for some meaningful change."

Washington, which remains Seoul's most important ally and has a large security presence in the South, on Tuesday congratulated Moon on his landslide victory.

"We look forward to working with president-elect Moon to continue to strengthen the alliance between the United States and the Republic of Korea and to deepen the enduring friendship and partnership between our two countries,"  White House press secretary Sean Spicer said in a statement.

Related: How good is the new missile defense system the US just deployed in South Korea?

National elections are public holidays in South Korea and figures showed a turnout of 77.2 percent — the highest for 20 years in a presidential poll.

The campaign focused largely on the economy, with North Korea less prominent. But after a decade of conservative rule Moon's victory could mean significant change in Seoul's approach towards both Pyongyang and key ally Washington.

The 64-year-old — accused by his critics of being soft on the North — advocates dialogue to ease tensions and to bring it to negotiations. He is seen as favouring more independence in relations with the US, Seoul's security guarantor with 28,500 troops in the country.

Their presence, he told reporters during the campaign, was "important not only to our own security but also to the global strategy of the US".

The North has carried out two nuclear tests and a series of missile launches since the start of last year in its quest to develop a missile capable of delivering a nuclear warhead to the US mainland.

Washington has said military action is an option, sending fears of conflict spiraling.

More recently US President Donald Trump has softened his message, saying he would be "honored" to meet the North's leader, Kim Jong-Un.

Moon also says he would be willing to visit Pyongyang to meet Kim and advocates resumption of some of the inter-Korean projects shuttered by his predecessors, including the Kaesong joint industrial zone.

But corruption, slowing growth, unemployment and even air pollution from China topped voters' list of concerns.

South Korea's rapid growth from the 1970s to 1990s pulled a war-ravaged nation out of poverty but slowed as the economy matured, and unemployment among under-30s is now at a record 10 percent.

Frustration over widening inequality in wealth and opportunities fueled anger over Park's scandal, which exposed the cosy and corrupt ties between regulators and powerful family-oriented conglomerates, known as chaebols, that have endured for decades.

Moon, Ahn and other candidates promised to reform the chaebols, which dominate the economy and have long been criticized for operating with little scrutiny.