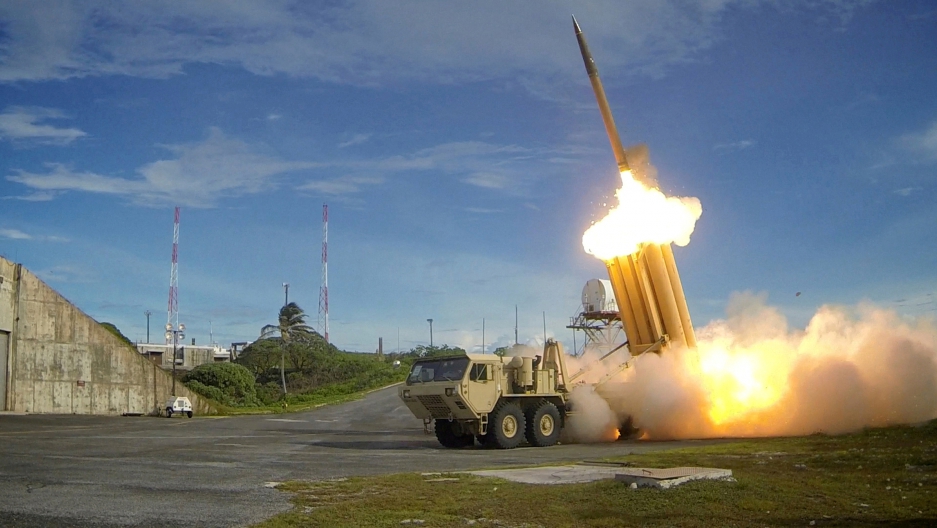 It looks cool, but does it work? A Terminal High-Altitude Area Defense (THAAD) interceptor is launched during a test, in this undated photo provided by the Pentagon’s Missile Defense Agency.

THAAD — the Terminal High-Altitude Area Defense system — has just been deployed by the US military in South Korea. The stated goal is to defend against North Korean missiles. But how well does it work? And how does it work?

But there’s something about the way it works that makes it different from other air defense systems.

“It’s not an explosive warhead rocket,” Axe explains. “It’s just basically a solid warhead. They call it a kinetic warhead, or a kinetic munition. So rather than exploding it simply strikes its target.”

In a sense, it’s like a very expensive slingshot that’s trying to hit an arrow in flight. Obviously it has to be accurate — close is just not good enough.

Related: Is North Korea really a threat to the United States?

THAAD has been operationally effective for about 10 years now, and the US has deployed it elsewhere in the world.

The THAAD system was in development for decades, since the days when President Ronald Reagan wanted to deter the Soviet Union. Investment accelerated when the first Gulf War in 1991 revealed the threat posed by weapons like Saddam Hussein’s Scud missiles. But success was slow in coming, and dozens of tests failed in the early years. Billions of dollars of investment have made it much more effective.

“It’s meant to defeat incoming short-, medium- and intermediate-range ballistic missiles,” Axe says. “It does not defend against world-spanning intercontinental ballistic missiles,” he adds. These are the kind of missiles that could hit the United States, but which North Korea has not yet mastered.

Axe describes THAAD as providing a protective arc that can be compared to a bubble. “The exact numbers are classified, but it covers a bubble about 100 miles high, and 100 miles surrounding the launcher.”

One hundred miles high takes the system just outside Earth’s atmosphere. Axe says it’s important to intercept the enemy’s missiles before they start coming down, as they fall “real fast.”

“The key to making this work,” Axe adds, “is you’ve got to have very good sensors that can pinpoint and detect and track incoming missiles very accurately, and then your own missile needs to be able to travel very fast and very high and arrive at a very precise point, in order to actually physically strike that incoming rocket.”

The system has not been tested in battle, and analysts are aware that an enemy could try to counter it by sending a swarm of missiles. “That’s always a problem with any air defense system, that you can simply overwhelm it,” Axe says. North Korea, and China for that matter, rely on masses of missiles.

So THAAD is good, but no panacea. “And it was never meant to be,” Axe explains. “THAAD is part of a layered missile defense system. Most countries that try to build missile defense systems, aim for defense in depth. So in addition to THAAD, you might have sea-based Aegis missiles, that fire from warships and can cover other areas and are much more mobile. And then you have shorter-range Patriot missiles. You can connect all of these weapons to the same sensor and command network so you can coordinate your defenses.”

The THAAD deployment in South Korea has proven controversial in the region. There have been protests in South Korea by people who live near the deployment site, who are afraid of becoming targets. Anti-war protesters have also clashed with riot police.

South Korea was also concerned by an off-the-cuff comment from President Donald Trump last week that Seoul should pay for the THAAD battery, with the figure of $1 billion being floated. However, the South Korean government says other Trump administration officials have assured Seoul that the United States will foot the bill.

Meanwhile, Beijing has expressed its concern, fearing the THAAD system also weakens China’s own deterrent, and that it allows the US to spy deep into China.