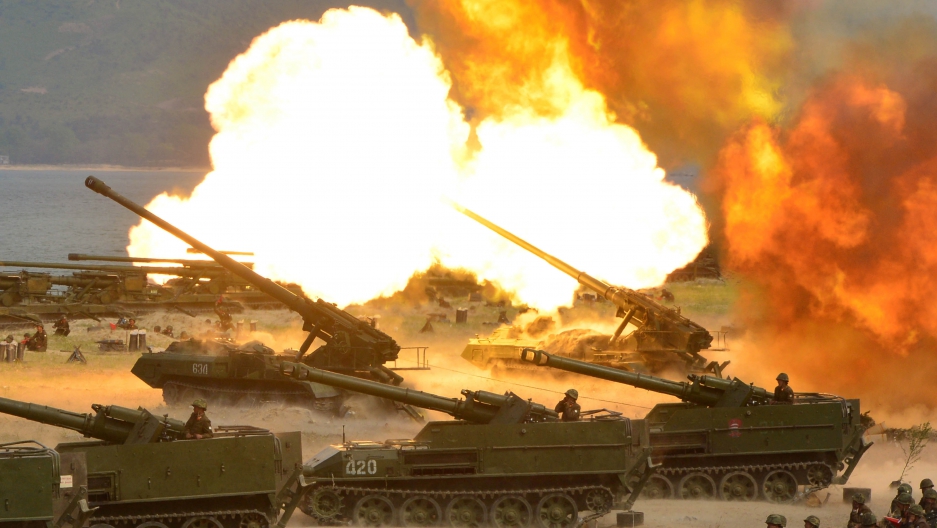 A North Korean military exercise is seen in this handout photo made available April 26th 2017.

Some US officials and pundits are fond of talking about the "threat" from North Korea. But what are the chances that its leader Kim Jong-un would initiate some kind of conflict or attack on the United States?

The suggestion prompts snorts of amusement from some Korea experts.

“The likelihood of a sneak attack by North Korea,” says Frank Jannuzi, “especially one with nuclear weapons, to me, is infinitesimally small.”

Jannuzi was the policy director of East Asian and Pacific affairs for the Senate Foreign Relations Committee from 1997 to 2012. He’s now head of the Mansfield Foundation, a think tank in Washington, DC.

Sung-Yoon Lee, of Tufts University's Fletcher School, agrees. “In the short term, the threat level is low and manageable,” he says. “North Korea is not suicidal, so it would not initiate a conflict.”

There’s no doubt North Korea could develop a missile capable of hitting the continental United States within the next few years. It’s also closer to building a miniaturized nuclear device that could fit inside one of those missiles.

Many countries have long-range missiles, or the capacity to develop them. What makes North Korea a threat?

“I think that under most circumstances, even now, when they are frankly already under economic sanctions and military pressure, North Korea will not be suicidal,” Jannuzi says. “North Korea will not attack the United States, knowing that it would seal its own destruction. Deterrence works."

“The only exception to that,” he adds, “is one where Kim Jong-un might determine that the United States was about to launch an attack designed to kill him and overthrow his government.”

Deterrence is the main goal of the North Korean nuclear program. Jannuzi and Lee agree that Kim Jong-un does not want to go the way of Saddam Hussein of Iraq, or Muammar Gaddafi of Libya. He wants to deter an attack.

Lee is a little more concerned about the longer-term threat, and having that power “might embolden the North to make more demands for aid and other monetary or political concessions.”

Jannuzi warns that the international community should be focused on what he considers more realistic threats: “The risk that they might proliferate; that they might export nuclear material or know-how — that’s a much greater risk.”

The North Koreans have already shared chemical weapons and expertise with Syria.

Lee adds that a war with North Korea could be political suicide for a US administration, too. Even without weapons of mass destruction, a conflict on the Korean Peninsula would cost the lives of tens of thousands of South Koreans, and thousands of Americans, according to Pentagon studies. The South Korean capital, Seoul, is well within range of the North’s massed artillery batteries. The damage to the world economy could be catastrophic.