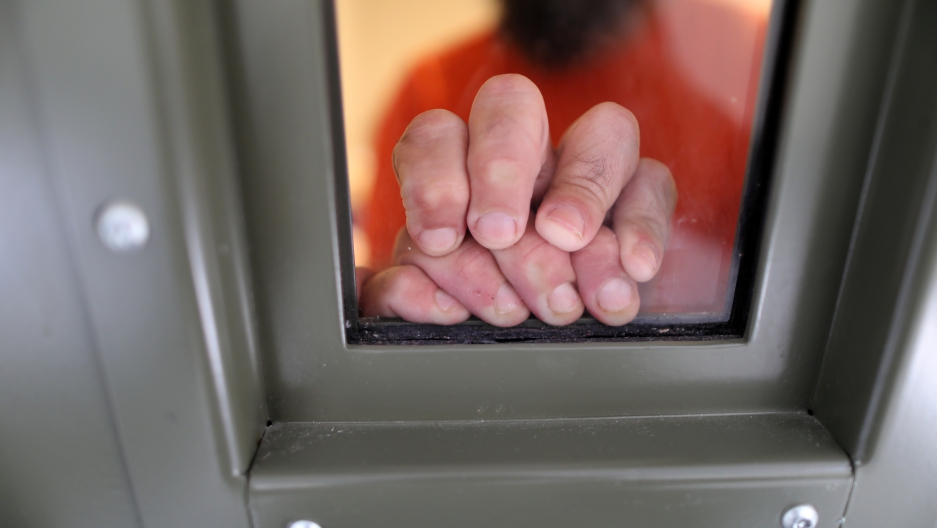 An immigrant detainee rests his hands on the window of his cell in the segregation wing at the Adelanto immigration detention center on April 13, 2017. The facility is run by the private prison company Geo Group Inc. in Adelanto, California.

On a blustery day in April, reporters file through the long echoing corridors of the Immigration and Customs Enforcement Adelanto Detention Facility in the high desert north of San Bernardino, California. Our tour guide is ICE’s Los Angeles field office director, David Marin, who’s built like a boxer with a buzz cut and has a fast-talking, hard-charging manner.

ICE supervises this facility, but it’s run by a private company, the Florida-based Geo Group — the second largest private prison company in the country.

Immigration detention is big business, and the Trump administration promises to make it bigger, with Congress set to vote on adding more than 5,000 new beds to the system this year. In a May 2 earnings call, company officials said profits were up 27 percent in the first quarter of this year.

But despite the big profits, human rights groups have assailed the Adelanto facility and ICE detention across the country for poor conditions and negligent medical care. Two weeks before our tour, a 32-year-old man was found hanging from a bedsheet in his cell. The day after, ICE would announce the second death in as many weeks, when Mexican citizen Sergio Lopez died in a nearby hospital. Detainee Norma Gutierrez, 41, said she hasn’t been adequately treated for stroke-like symptoms that have left her walking with a limp and unable to fully use her right hand.

Marin says he has nothing to hide, but ICE officials refuse to provide inspection reports to back Marin’s claim that health care has improved since its own inspectors found deficiencies in the wake of a 2015 death at the facility.

Marin and his colleagues show off spotlessly clean hallways, Xbox machines and electronic law libraries that no one is using. We pass a deserted dental clinic, and a similarly empty women’s hair salon. Outdoor recreation areas with basketball hoops and picnic tables are also unused. However, a men’s barber shop is bustling, and one detainee shoots hoops in a small recreation space adjacent his dormitory.

Detainees wear color-coded jumpsuits — blue for those who have no criminal record, orange for those with minor convictions and red for detainees whose past records are more serious. Technically, no one is in detention as punishment for a crime, but life inside is virtually indistinguishable from prison.  Detainees are counted seven times a day, subject to solitary confinement for misbehavior, and live in close quarters. In one women’s dorm, an elderly Armenian woman in a red jumpsuit weeps as she leans on a wheelchair. She struggles to make herself understood in English and displays a badly swollen ankle for reporters.

To the chagrin of an ICE public information officer who’s along on the tour, an official announces in prison-speak that guards will “bring the bodies” so that reporters can conduct interviews. “They’re people,” ICE’s Virginia Kice interjects. Later, the agent corrected himself, referring to the interviewees as “subjects.”

Men live two to a cell in a dorm with some 80 people. In the women’s section, there are no private rooms at all. The women live dormitory style — also 70 or 80 to a large room — in bunk beds stacked so closely together, it seems there’s just barely enough room to get in and out of bed.

Detainees file into the chow hall and stand in line for ladles full of rice and beans, a breaded mystery meat patty, school cafeteria-style mixed veggies and a roll. When it’s their turn, an anonymous server shoves a tray through a small slot. It seems cold, but ICE agent Gabe Valdez says it’s so that no one can claim kitchen staff played favorites by giving one person a bigger portion than another.

Despite the cleanliness and order of Adelanto, it’s a pressure-cooker atmosphere, in part because nearly everyone lives in limbo. Asylum-seekers worry they’ll be returned home to face persecution if they can’t prove their cases. Longtime residents wonder if they’ll return to their lives in the United States, or be forced to build new ones in their countries of origin.

“It’s very tense,” said Norma Gutierrez, who worries about recovering her health. “When I’m finally out I want to see a doctor to find out what’s wrong and what happened to me. I need therapy to get back to the way I was before.”

Editor's note: Reporting for this story was first commissioned by Capital and Main.