Courtesy of the Goldman Environmental Prize

Rodrigo Tot is a 60-year-old farmer and an indigenous land rights activist from Guatemala. He represents an isolated, small Q’eqchi farming and fishing community of about 270 members in the long-running fight to secure legal ownership over their communal lands.

Tot and his community stood up to the government and nickel miners expanding into their land in Agua Caliente.

And now he's won one of the world's most prestigious activism awards, the Goldman Environmental Prize.

“Don Rodrigo, that’s how we call him because he’s one of the elders in the community. As you can imagine elders in indigenous communities are well respected,” says Leonardo Crippa, a lead attorney with the Indian Law Resource Center in Washington, which has provided legal support to the Q’eqchi community.

“He’s a man with determination. Very simple, humble man with one goal: to get title over his community’s land, regardless of any nickel mining project on his community's lands," Crippa says.

In the 1980s, as Guatemala's long civil war raged on, records of the community's land ownership disappeared. According to Crippa, "Guatemala allowed pages to be stolen from the registry book that are necessary for the land titling agency to complete the land records and finally issue the land title to the community."

By the 2000s, the government began granting mining licenses for indigenous lands, including in Agua Caliente.

The Q’eqchi set out to fight for their land rights in court.

"As one of the few people of Agua Caliente who spoke Spanish, Tot translated all the details of the proceedings for the community, organized meetings to help gather evidence, and fielded questions from villagers," the Goldman Environmental Prize said in a biography on Tot. 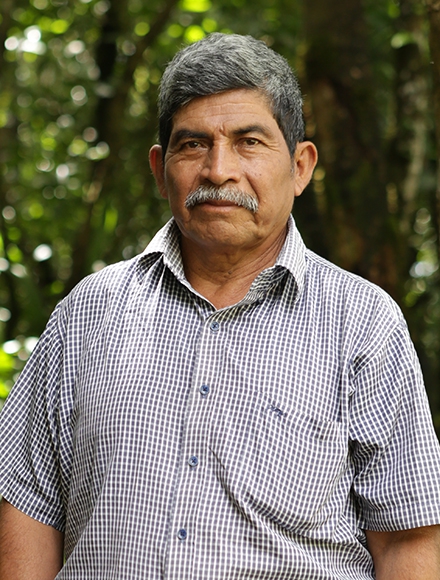 Then in 2011, two years after the community filed their lawsuit, something unexpected happened: they won. Guatemala's constitutional court issued a landmark decision recognizing the Q’eqchi’s collective property rights. The court ordered the government to replace the missing registry pages and issue land titles to the people of Agua Caliente, according to Goldman.

"The ruling came as a surprise to environmental and indigenous activists around the world who were well aware of corruption in Guatemala’s legal system and had been skeptical of the court’s ability to see how egregious these violations had been," the website said.

That’s why the case is so important, says Crippa, because it shows the lack of an effective land titling system and “how this is manipulated by the government in order to favor mining interests on indigenous lands in Guatemala.”

However, the struggle remains. The government hasn't been enforcing the ruling, and miners continue to pursue expansion into the community. The case has risen to the Inter-American Commission on Human Rights, the hemisphere's highest inter-governmental body on the issue, where Crippa hopes it will lead to long-lasting land reform in Guatemala.

“That’s our goal, that’s the goal of Agua Caliente, and that’s the hope of the Maya Q’eqchi people of Guatemala, that this case will open up a discussion in the Guatemalan Congress so that finally Congress passes a bill recognizing indigenous peoples, especially their collective ownership rights over their lands,” Crippa says.

The campaign for justice has not come without great personal risk. Previous Goldman prize winners such as Berta Cáceres have been killed in Latin America, which rights groups say is the most dangerous region to be an environmentalist.

Tot said one of his sons was murdered because of his land reform activism.

"The fight to defend our land has been very hard. I lost one of my sons," Tot told Goldman in a phone interview. But he continues to organize and campaign because, he says, nickel mines would poison local water sources by discharging untreated wastewater in streams and lakes used for fishing and farming.

"Our land has a lot of natural resources and sources of water. We don't want our resources to be polluted," Tot said.

2017 Prize winner Rodrigo Tot has suffered greatly because of his activism. Despite this, he continues to fight: https://t.co/gdNxrIgZIB pic.twitter.com/6YEenSiyRA