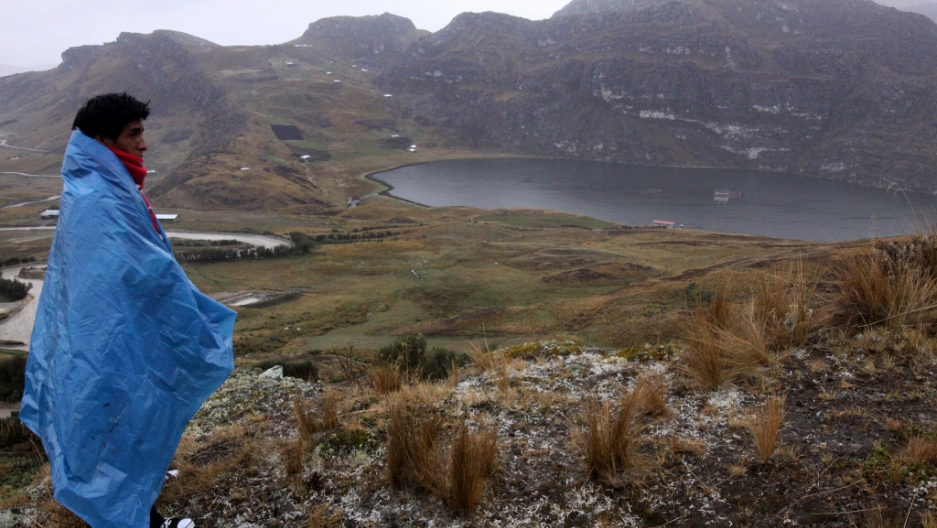 A peasant camping near the Conga mining project looks at the Laguna de Mamacocha on October 08, 2012, about 870 km northeast from Lima.
Share

LIMA, Peru — As anti-mining activist Cleofe Neyra talks about the repeated death threats from anonymous callers to her cellphone, it is hard to imagine she may actually be one of the lucky ones.

“They said they would be waiting for me, that they would rape and kill me,” Neyra, a 53-year-old smallholder farmer from Huancabamba, in Peru’s northern region of Piura, told GlobalPost.

“It was traumatic, of course. You think the worst. You think about your family, your husband and your kids. You have to stay strong but it is very difficult to avoid letting it affect you. Thank God I am still here.”

For years, Neyra, who was campaigning against the opening of a UK-owned open-pit copper mine near her village, barely left the house. And when she did, male family members or friends always accompanied her.

She had every reason to take the threats seriously.

A quarter century after the shooting of Brazilian rubber-tapper and Amazon conservationist Chico Mendes sparked international outrage, it’s still almost routine for environmentalists across Latin America to pay for their activism with their lives.

Although there are no definitive statistics, the United Nations has warned that no region in the world experiences as much violence against green campaigners as Latin America.

“Defenders working on land and environmental issues are also highly exposed to attacks ... and many are killed because of their work on the environmental impact of extractive industries and development projects, or the right to land of indigenous peoples and minorities,” the UN’s human rights special rapporteur wrote in one recent report.

“The Americas seems to be the region where these defenders are most at risk.”

Recent slayings include the early August killing of Noe Vazquez, in Veracruz in eastern Mexico, who had been campaigning against the construction of a hydroelectric dam that green groups claim would affect the water supply to local communities.

Just a few weeks earlier, in Peru, the Ashaninka indigenous leader Mauro Pio Pena, 57, was gunned down in the Amazon. His friends and family are convinced his murder was the result of his campaigning to stop logging on indigenous land.

Even Costa Rica, often viewed as the safest and most environmentally conscious country in the region, recently saw the slaying of Jairo Mora Sandoval, a 26-year-old who had been attempting to stop the poaching of critically endangered leatherback turtle eggs on Caribbean beaches.

More from GlobalPost: Belize's Cockscomb basin — where the big cats are

Meanwhile, in Brazil, environmentalists continue to spill their blood for the green cause even despite the global revulsion prompted by two of the most high-profile slayings of environmental activists ever: the US nun Dorothy Stang in 2005, and Mendes back in 1988.

Spanish biologist Gonzalo Alonso Hernandez, 49, was shot dead in the Cunhambebe Park, just 100 miles from Rio de Janeiro, also in August. Local law enforcement officials believe the killing was likely linked to his campaigning against illegal logging and poaching in the park.

The reasons for the violence are no mystery, according to Larry Ladutke, a Central America expert with human rights group Amnesty USA.

Although murders of professional environmentalists based in big cities do also occur, those who bear the brunt of the bloodshed are typically local activists, including indigenous leaders, from small communities in remote rural areas.

They are usually involved in bitter conflicts over the use of local lands and natural resources with the wealthy, often ranchers but also miners and loggers, including sometimes even legal, supposedly legitimate multinationals.

A deforested portion of the Amazonian rain forest in the Anapu region, 600 km from Belem in northern Brazil. From April 2005. (Antonio Scorza/AFP/Getty Images)

“Latin America in general is a region of extreme inequality,” Ladutke said. “’Campesinos’ and indigenous peoples and others of low social status are targeted because they have so few resources or [they lack] a strong voice within society.”

“The investigations that do take place are often flawed before they even start, with the authorities announcing that murders are the work of common criminals rather than being the result of the victim’s environmental work.”

An activist at the Miguel Agustin Pro Juarez Human Rights Center, based in Mexico City, agreed. One cause, he claimed, is a wave of new trade treaties that promote investment in mining, energy and other extractive activities.

The projects often take place in isolated rural areas where there’s little law enforcement, and, he alleged, the few police that are present haveoften been bought off by the companies.

Meanwhile, in Mexico in particular, the rampant drug trade has created a pool of readily available hit men.

“The reality on the ground is that law is very weak in terms of regulating megaprojects,” the Miguel Agustin Pro Juarez activist, who asked to remain anonymous, said.

“It favors the companies and local people have no way to participate in decision-making about their communities or territories other than protesting and roadblocks, so even the law makes them vulnerable.”

With many Latin American economies reliant on exports of raw materials, and corruption and ineptitude widespread among the region’s police forces and justice systems, campaigners fear that the severe rights abuses of environmentalists are unlikely to stop any time soon.