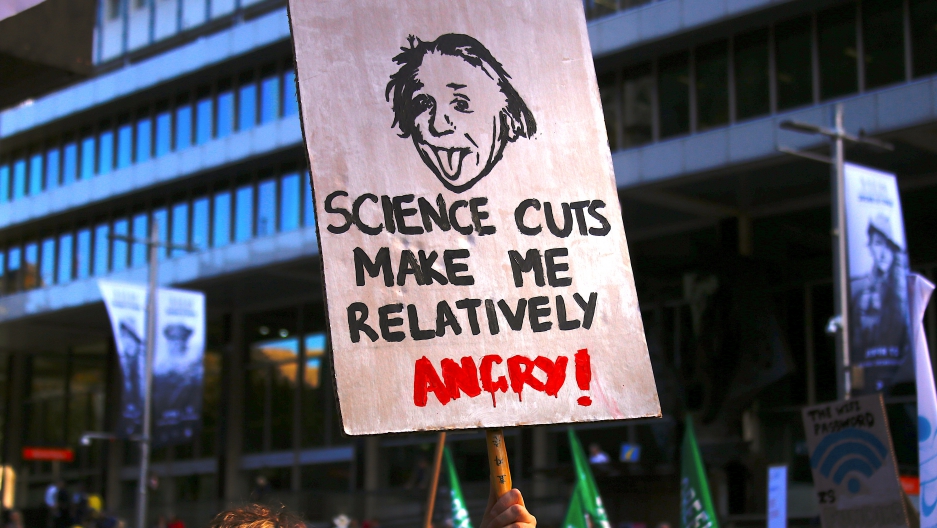 Protesters hold placards and banners as they participate in the March for Science rally on Earth Day, in central Sydney, Australia April 22, 2017.

Thousands of people rallied in support for science in Europe and Australasia on Saturday ahead of a march in Washington, triggered by rising concern over populism and so-called alternative facts.

The March for Science demonstrations have been organised in response to what is seen as mounting political pressure on facts-based evidence.

The casualties of this assault, say organisers, include efforts to fight climate change, the teaching of evolution and sexual health and budgets for vital research.

Vocal protesters in Sydney wearing white lab coats called on politicians to support the scientific community, carrying banners reading "without science, it's just fiction" and "we need thinkers not deniers". 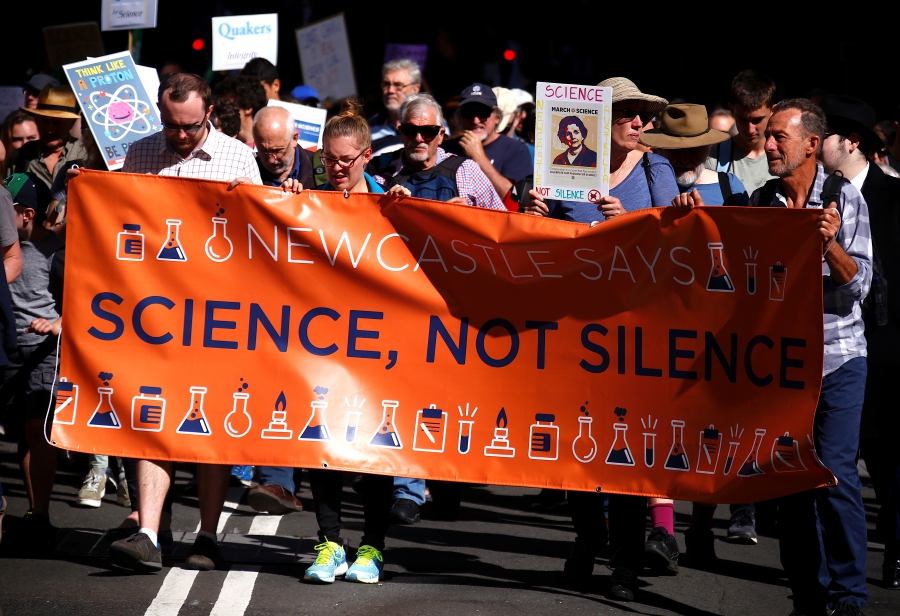 Protesters hold placards and banners as they participate in the March for Science rally on Earth Day, in central Sydney, Australia April 22, 2017.

Demonstrators also turned out in Melbourne, Brisbane, Perth, Adelaide and other cities as well as Wellington and Auckland in New Zealand.

"In this day and age, there's so much fake news and alternate facts going around that it's important to remember that science is what has built the society we know today," Parissa Zand, who was at the Sydney march with her molecular biologist mother, told AFP.

High-school science teacher Byrne La Ginestra said science had been getting a "bum rap", adding that "we need to... teach people that science isn't a political agenda, it's just facts".

Canberra last year reversed a decision to cut hundreds of jobs from the national science body CSIRO after a public outcry.

Protestors in major university cities in Europe posted pictures on Twitter of marches in Bonn, Helsinki, Munich and Stockholm. In Paris, a banner in French read: "We are the resistance against the orange menace in Washington! Defend science!" The London rally was attended by actor Peter Capaldi, who plays TV's time-travelling hero of science, Dr Who.

Other rallies were scheduled in Brazil, Canada, Japan, Mexico, Nepal, Nigeria and South Korea — part of a campaign expected to unfold in more than 600 cities worldwide.

But the biggest turnout by far was expected in Washington.

The US organizers have said the event is non-partisan but admit Donald Trump has "catalysed" the movement.

Trump has vowed to slash budgets for research at top US agencies, including the National Institutes of Health (NIH), NASA, the National Oceanic and Atmospheric Administration (NOAA), and the Environmental Protection Agency (EPA) which could lose one-third of its staff if Congress approves the proposal.

He also named as head of the EPA Oklahoma lawyer Scott Pruitt, who claimed last month that carbon dioxide is not the main driver of global warming, a position starkly at odds with the global scientific consensus. 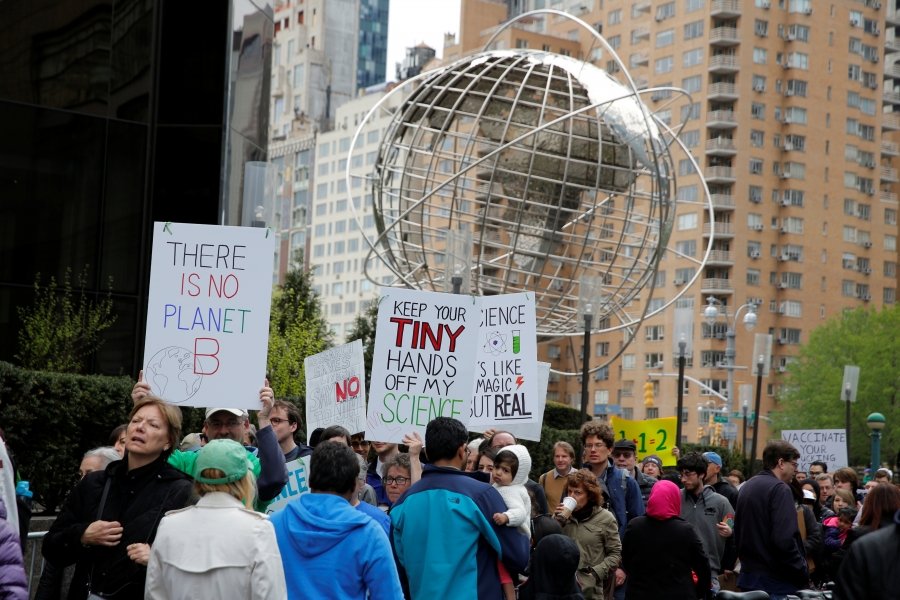 "In the response to this absurdity lies cause for hope," Paul Hanle, chief executive officer of Climate Central, an independent organisation of scientists and journalists, wrote in an op-ed this week.

"Seeing the assault on fact-based thinking, scientists are energised."

At a time when the Earth has marked three consecutive years of record-breaking heat, and ice is melting at an unprecedented rate at the poles, risking massive sea level rise in the decades ahead, some marchers say it is more important than ever for scientists to communicate and work toward solutions to curb fossil fuel emissions.

"I will be marching in London on Saturday not so much to fly the flag for science -- though I believe it is something worth celebrating -- but because I think that in these fractious political times, when we are facing challenges that are truly global, it has never been more important for scientists to go public," said Stephen Curry, a professor of structural biology at Imperial College London.

Professor of carbon management at the University of Edinburgh, David Reay, said scientists "are not famous for their camaraderie. We are trained to question, criticise and, where needed, contest each other's work.

"That we are now marching together is testament to just how threatened our disparate community feels." 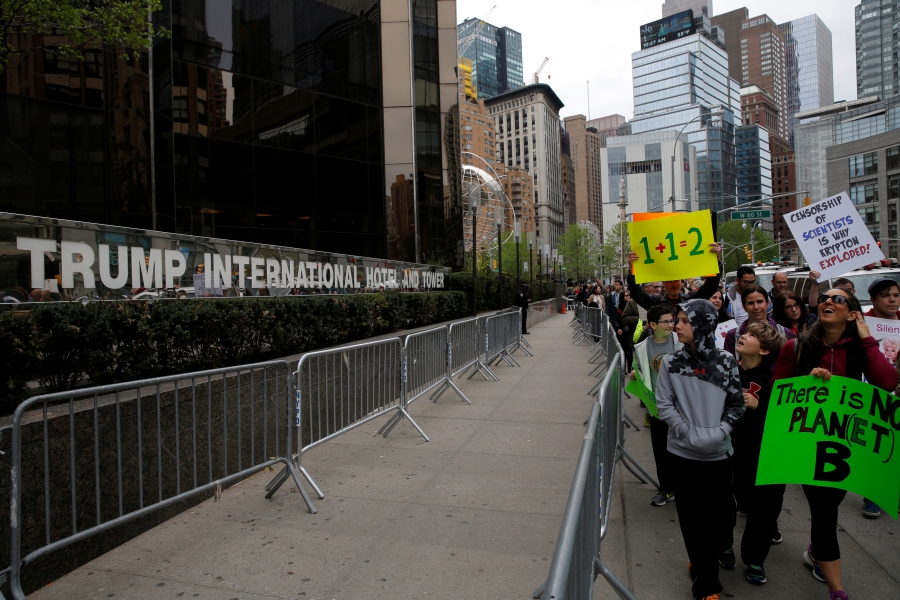 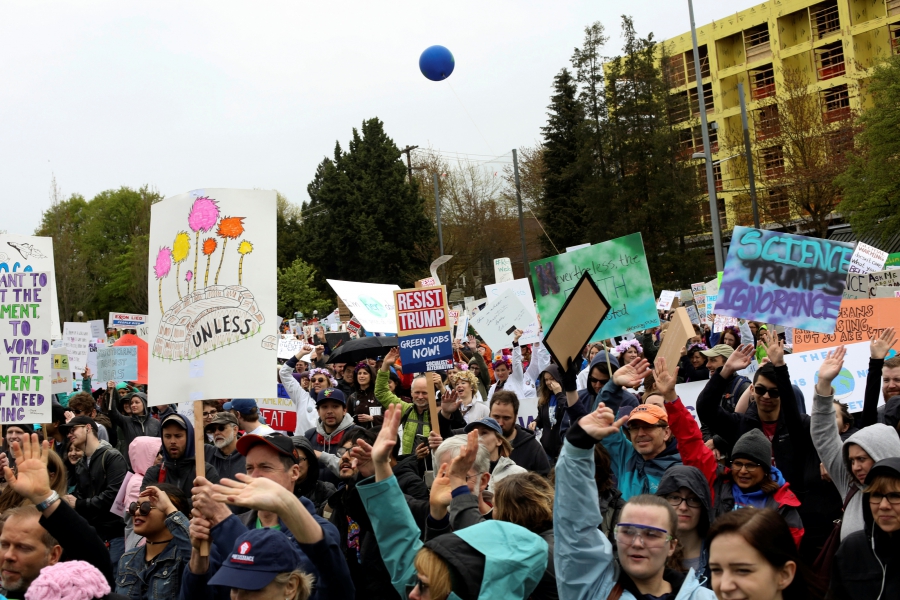 Protestors hold signs during the March For Science in Seattle, Washington, April 22, 2017.