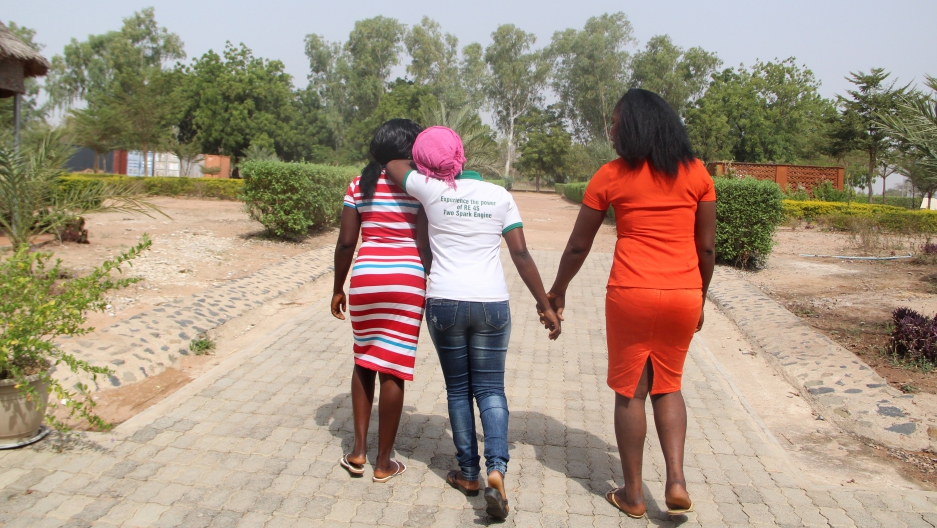 Ladi, Glory and Mary, three of the escaped Chibok girls, stroll through the gardens of the American University of Nigeria, in Yola, Nigeria. They've received scholarships to go to school at AUN.

Much has been written about the Chibok girls, the 276 schoolgirls from the village of Chibok in northern Nigeria who were kidnapped by Boko Haram in April 2014. A few have been found or rescued in the past few months; most are still missing. However, there’s another group of those Chibok girls we’ve heard less about — those who managed to escape the night of the abduction.

Mary, Glory and Ladi are three such girls. Even though militants had threatened to shoot any girls who tried to escape, these three decided to risk it. They jumped from the trucks that were transporting them and fled into the forest. We're not using the girls’ last names because there are real, ongoing security concerns for them and their families.

In the weeks following the attack, Mary felt empty. She was home with her family, but she had witnessed her friends being kidnapped; Boko Haram still threatened the region and she couldn’t go back to school.

Related: #BringBackOurGirls was a mistake

Then, something unexpected happened. Margee Ensign, the president of a private school, the American University of Nigeria, heard the escaped girls’ story. And she was so moved she decided to offer them full scholarships.

Mary desperately wanted to go back to school. But her grandfather said no. He was scared.

“At that time, everybody was saying, if you allow your children to go back to school, [Boko Haram will] kidnap them again,” Mary says.

Mary’s grandfather had almost lost her once. He didn’t think an education was worth losing her again. Mary felt resigned to his decision. But her mother couldn’t stop thinking about the offer. When she was her daughter’s age, she had wanted to go to school. Instead, she was married off at age 14. She didn’t want that for her daughter.

In Ladi’s house, things played out differently. Her father wanted her to accept the university's offer. But Ladi was traumatized by the attack and frightened at the idea of returning to school. She felt betrayed by her dad.

“Did you like what happened to me?” she says she screamed at him.

“He said, ‘you’ll go to school because, if you are educated, you can help the community and change the [Boko Haram] thing that is happening,’” Ladi remembers.

Ladi wasn’t convinced. She was so angry that she stopped talking to her dad.

Eventually, though, her friends persuaded her to go.

As for Glory, she is the only child in her family to have the opportunity to go to school. When the school in Chibok closed after the attack, her parents didn’t have the money to send her anywhere else. So when the unviersity offered her a full scholarship, she jumped at the opportunity.

The first group of girls from Chibok arrived on campus in Yola on Aug. 30, 2014. Their arrival was kept secret — so secret that even the assistant dean of student affairs, Reg Braggs, didn’t know about it. He learned the night of their arrival that he would be responsible for their education and integration.

The girls from Chibok were high school students, so they weren’t ready for university. They needed a special curriculum that Braggs would have to develop.

“There was no playbook to pull off the shelf and say, this is how you put together a program for students who just got away from a terrorist organization,” he says.

While Braggs got to work on building a program for the Chibok girls, the 24 new arrivals had a lot of adjusting to do. Chibok is a small agricultural village. The girls’ families grew corn, yams and peanuts. Most of the girls had never been in a city like Yola, with hundreds of thousands of residents.

Mary says when she walked onto campus, with its sculpted lawns and gardens, state-of-the-art buildings and air conditioning, she was overwhelmed. Her first thought was, “Oh my god, this is not Nigeria. Maybe it’s another country!”

It was too much for her and she began to cry. Her dad gave her a pep talk, even though originally, he hadn’t supported her decision to go to school.

Still, it was a huge adjustment. Most of the girls spoke Hausa at home — here everyone spoke English. The food was different. The clothes were different. Glory says even the water they drank was a different color. Culture shock was inevitable.

To deal with these stresses and the trauma they had experienced in the attack, they started meeting with the university's counselor, Regina Mousa.

“At first, they were agitated and couldn’t sleep,” Mousa remembers. “They were so fearful. It took them some time to recognize that they were in a safe, secure place.”

Mousa worked with the girls on their fears. With time, they settled down and she got fewer and fewer panicked calls in the night.

Meanwhile, Braggs was creating a whole new world for the girls — a specialized program called the New Foundation School. They were all housed on one floor of a residence hall. They received new clothes, computers and laptops so that they would be on the same footing with other students. Braggs set up activities for them. He found university students to become their mentors. The girls began coming out of their shells.

Then, there were the academics. The school the girls had attended in Chibok actually wasn’t very good. Glory says the teachers often didn’t show up and the students, left to their own devices, would just sit in class, sewing and braiding each other’s hair.

“We didn’t know how to read or how to concentrate on our books,” Glory says. “We never actually did our assignments.”

At the American University of Nigeria, school is serious business. Even activities like talent shows and debate nights are meant to help the girls cultivate public speaking and critical thinking skills. For Braggs, this is what an American-style education is.

“It’s not just learning your times tables,” he says. “Two times two is four but why? At AUN, we want students to explain why they think that is.”

It’s been two and a half years since the girls first came to the university. Six have since graduated from the New Foundation School and started university. Eighteen girls are still working their way through high school classes — including Mary, Glory, and Ladi, who are now 17. They know they have an incredible opportunity and they aren’t about to waste it.

Sometimes, Mary thinks about the girls who didn’t get away. She tries to imagine what life is like for her former roommate and the girls she once sat in class with.

She prays they’ll get an opportunity like she did.

Last October, after long negotiations, Boko Haram released 21 of the captive schoolgirls. Ladi remembers turning on the TV that day.

“All of us were shouting and jumping,” she says. “Everybody was happy.”

‘Would never have believed these were the same girls’

The recently released girls are still in the custody of the Nigerian military. There are concerns that they may have been brainwashed by their captors and could pose a security threat. But if they do pass security reviews, Braggs says, there’s a place for them at the university.

“The students that we have here in our program know all of the girls who were recently released,” he says. “So this is really the best place for them to come.”

The girls have come a long way. Their mentors and teachers glow with praise for them. Mousa, their counselor, recently saw some of the girls speak at a school function.

“I started crying — I would never have believed these were the same girls who were once so timid and withdrawn,” she says. “They’ve just grown to be such beautiful young women. They really are the silver lining.”

When Mary, Ladi, and Glory go back to the village now, they are respected. People ask them for advice. Ladi and Glory want to be doctors. Mary wants to be a lawyer. All of them want to make life better for people in Chibok.

“When I go back to my community, I want to teach people to read and to encourage them the way that people encourage me,” Mary says. “I know, one day, this Boko Haram issue will be over.”

The name Boko Haram means “Western Education is Forbidden,” which makes it a terrible irony that the attack on Chibok led to unimaginable opportunities for some of its survivors. It also turned these girls into passionate advocates for the value of education.

“Today we are in school,” Glory says. “Tomorrow, we are going to be better and to change everything that is happening in our community.”