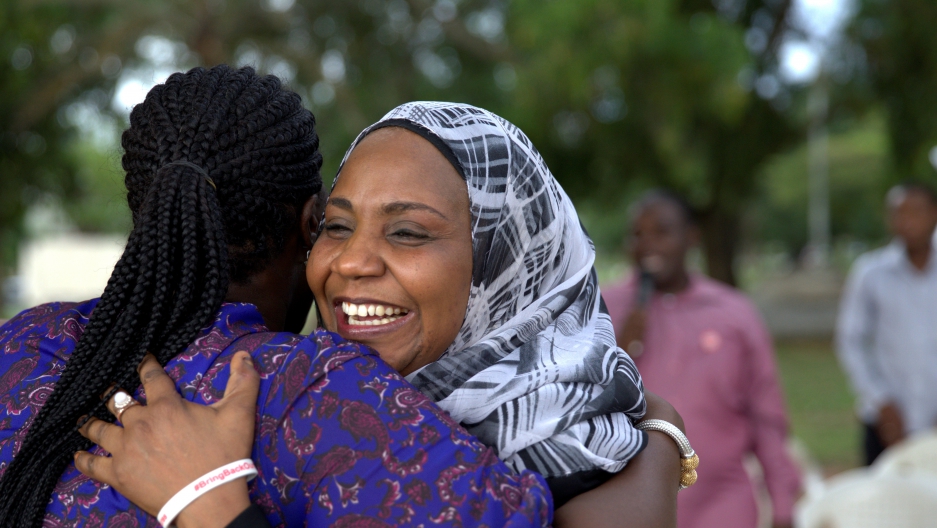 Many Nigerians feared the family reunions would never happen.

But 21 school girls held for more than two years by the extremists of Boko Haram were reunited with their anguished families Sunday.

"As you can imagine, the parents were ecstatic. They were in tears," says Nigerian author and journalist Adaobi Tricia Nwaubani. "A mother carried her [released] daughter on her back and held her wrapped around her back for most of the ceremony."

Boko Haram kidnapped 276 girls from their boarding school in the northeastern town of Chibok in 2014. An estimated 57 girls escaped in the days following the abduction. Now about 114 remaining unaccounted for.

The released girls have not spoken extensively with the media. But they have reported that dozens of their classmates are still in the Sambisa Forest with Boko Haram. They say the captives have a choice of either marrying Boko Haram fighters or working as slaves.

Now Nigerian officials say they have the names of 83 girls who are still alive and expect to continue negotiations for their release. This was good news for some of the parents whose daughters are still missing.

"These parents ... said the girls told them that their daughters were alive in the batch of 83 still left with the faction of Boko Haram that released these girls — the ISIS-led faction," according to Nwaubani.

She says the extremists were shrewd about whom to release.

"There is something they want, and they've given us 21 [captives] to taste what it's like to have some of the girls back, and of course whet the appetite of the parents," Nwaubani says. "None of the girls who were released are girls whose parents have been in the media. So they are being very careful to make sure very outspoken parents don't have their daughters released yet."

Nigerian officials say they have not exchanged any Boko Haram prisoners for the Chibok captives. But the government hasn't denied paying ransoms. The Swiss government and the International Committee of the Red Cross helped broker the release.

Nwaubani says it will be difficult for the released girls to reintegrate back into their communities, based on the experience of Amina Ali, the only other Chibok girl to escape after the initial days of the abduction.

"She's still under lock and key, the government has her in a safe house almost five months after she was found," Nwaubani says. "So I think it's going to be a little bit of a struggle."