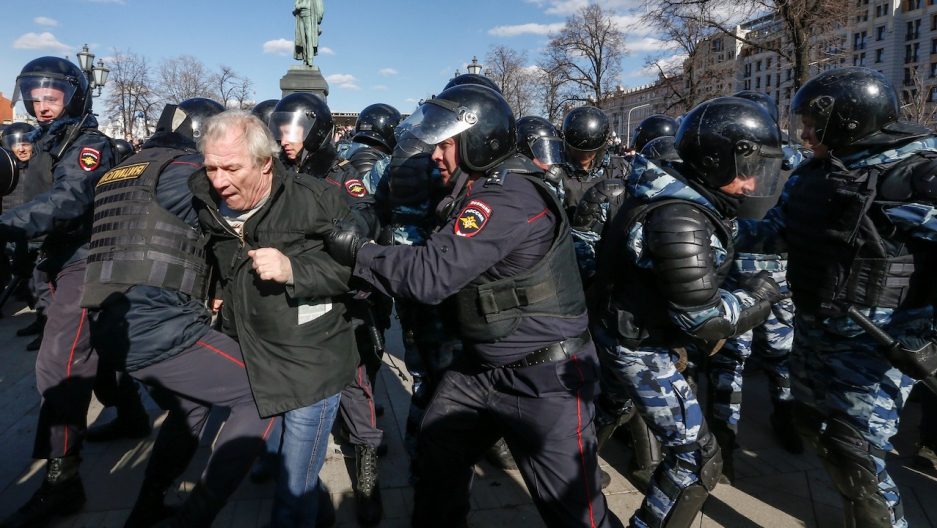 Russian police arrested more than 700 people at an anti-corruption demonstration in Moscow on Sunday called by leading Kremlin critic Alexei Navalny, according to a website that monitors the detention of activists.

The website OVD-Info made the claim on Twitter. Earlier Russian police said about 500 people had been arrested during the demonstrations, including Navalny himself, who supporters said was due to go before a judge on Monday.

Thousands of Russians defied bans to stage protests across the country against corruption. Navalny called for the marches after publishing a detailed report this month accusing Prime Minister Dmitry Medvedev of controlling a property empire through a shadowy network of nonprofit organizations.

The report has been viewed over 11 million times on YouTube, but so far Medvedev has made no comment on the claims.

Navalny, who has announced plans to run for president in the 2018 election, has been rallying supporters in major cities in recent weeks and Sunday's march in Moscow was one of the biggest unauthorized demonstrations in recent years.

Police detained Navalny as he was walking to the protest, putting him in a police minibus, and the crowd briefly tried to block it from driving off, shouting "Shame!" and "Let him out!"

"Guys, I am all right, go on along Tverskaya," Navalny tweeted from the van.

Dozens of police vans and rows of riot officers were lined up as a police helicopter hovered overhead.

'They lie and steal'

"We have all seen the movie, it gives specific examples of corruption, and there has been no reaction," Nikolai Moisey, a 26-year-old factory worker, said of the claims against Medvedev.

"They steal and they lie but still people will be patient to the end. The protest is a first push for people to start acting."

Moscow police estimated the turnout at 7,000-8,000, making it one of the biggest non-authorized demonstrations in recent years.

Police officers moved to detain protesters and clear the square, with some using truncheons and pepper spray to disperse the crowd, AFP correspondents said.

OVD-Info, which monitors the detention of activists, said hundred had been detained in multiple cities.

The group had said earlier that its website had been shut down by a distributed denial of service, or DDoS, attack.

"Everyone was detained and brought to the police," a spokeswoman for the group, KiraIarmych, said on Twitter.

Despite the dramatic scenes in Moscow, state TV did not cover the protests, instead showing soap operas and nature films.

"The whole country is tired of corruption on such a scale," 50-year-old Natalia Demidova said. "Medvedev should be fired once such exposes come to light."

Elsewhere, about 2,000 gathered in the Siberian city of Novosibirsk, carrying signs such as "No to corruption," according to local news website Sib.fm.

Some held up images of yellow rubber ducks, following reports that Medvedev has a special house for a duck on one of his properties. 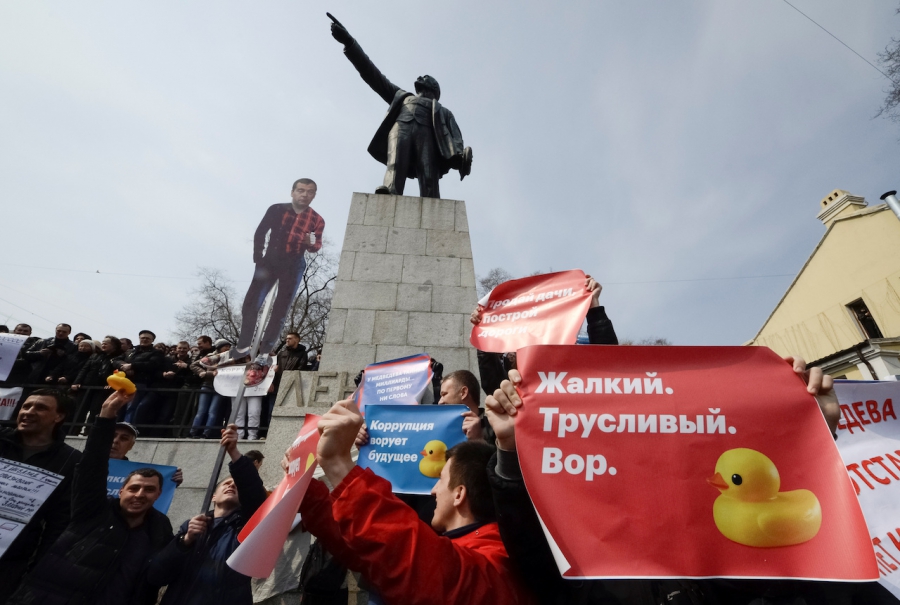 Opposition supporters hold posters and a cutout figure depicting Prime Minister Dmitry Medvedev during a rally in front of a monument of Soviet state founder Vladimir Lenin in Vladivostok, Russia, March 26, 2017. The poster on the right reads: "Pathetic. Cowardly. Thief."

In Saint Petersburg, about 4,000 people gathered in the city centre. "We're tired of the lies, we have to do something," Sergei Timofeyev told AFP.

Local media estimated about 1,500 people turned out in each of the Siberian cities of Krasnoyarsk and Omsk.

Navalny said on his website that 99 Russian cities planned to protest, but that in 72 of them the local authorities did not give permission, citing reasons such as street cleaning, a bell-ringing concert and rival events by various pro-Kremlin groups.

The authorities had also pressured students not to attend, with some cities even scheduling exams for Sunday, according to reports.

In the far-eastern city of Vladivostok, about 700 people nonetheless turned up, local website Prima Media said, and a dozen of people were detained by the national guard.

In the Urals city of Yekaterinburg, about 1,000 people turned up, according to local Znak.com website.

Navalny, a 40-year-old lawyer by training announced plans to run for the presidency after he won a surprise 27 percent of the vote in the Moscow mayoral election in 2013.

But he has been the subject of several legal prosecutions in recent years, and in February he was found guilty of embezzlement and given a five-year suspended sentence which could make him ineligible to run in next year's vote.