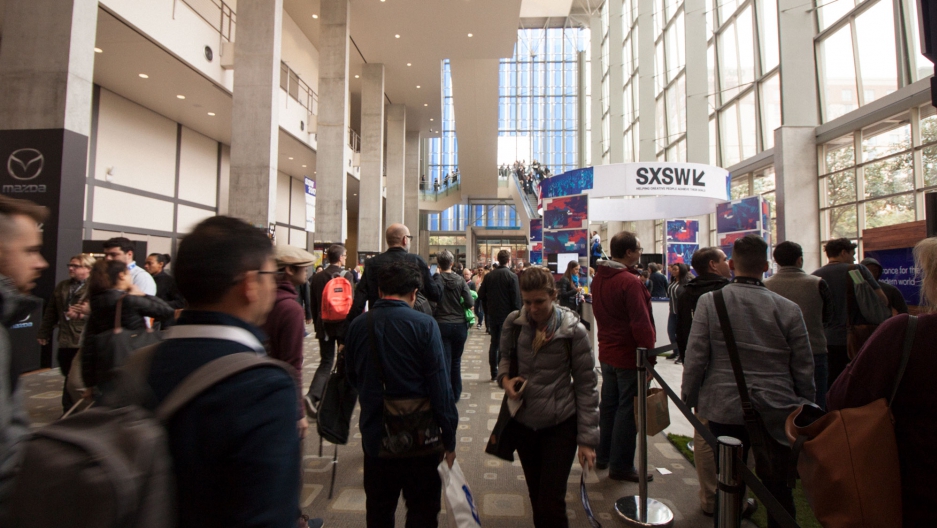 Attendees of SXSW Interactive pass through the halls inside the Austin Convention Center.

Every March in Austin, Texas, an explosion of technology entrepreneurs show off their latest ideas and hobnob at parties, tweeting, snapping and gramming epic stories about who they met and what they saw.

South by Southwest — referred to as SXSW — is known for the music and films that premiere here. But the weekend before the music is SXSW Interactive. It’s full of energy and deal-making.

But, this year is a little different. Normally when you leave a panel, there is inspired banter about some innovation that just rocked your world. Now, conversations invariably shift to Donald Trump.

“I’m obsessed with Trump,” one person from Australia told me.

And, for the most part, it isn’t to flatter him. Entrepreneurs here are largely concerned about what immigration restrictions might mean for their technology businesses — an industry many say is reliant on immigrants.

One of President Donald Trump's executive orders, issued at the end of January, temporarily restricted travel from seven Muslim-majority countries and banned refugees. It caused havoc at airports and was eventually suspended in federal court. His revised order, announced last Monday and set to go into effect on Thursday, is narrower in scope and attempts to address the constitutional challenges made in lawsuits. It honors existing visas and travel documents, but suspends the issuance of visas to refugees for 120 days and people from Syria, Iran, Libya, Somalia, Yemen and Sudan for 90 days.

The tech world is populated by highly skilled engineers, programmers and computer scientists among other disciplines. And companies say they need flexibility to tap talent in these fields, whether they are Americans or not.

Goswami grew up in India and has lived in Hong Kong and Taiwan. He moved to the US in 1991 and is now a citizen. The network Goswami founded, Bootstrapping, is a community of tech entrepreneurs who, rather than getting their funding from venture capitalists, “bootstrap” their start-ups. Bringing people together with different perspectives is key to making progress, he says.

He calls it “second order innovation” — when people from different countries and with different ideas collide inside of organizations or communities. That, he says, is when breakthroughs happen.

California’s Silicon Valley and other centers of concentrated tech talent seemed muted on the issue of immigration during the presidential campaign — perhaps because like many around the world, they did not expect that Trump was going to win. But now leaders in tech companies are starting to vocally raise their concerns about about Trump’s policies. Almost 100 tech companies filed an amicus brief against the first version of the immigration ban, saying the order “violates the immigration laws and the Constitution.”

The new restrictions on visas only affect companies’ ability to recruit from the six affected countries. But Bloomberg reported in January that they had reviewed a draft of an executive order to overhaul the work-visa programs too. Technology companies rely on these programs, such as H-1B work visas for immigrants with specialized skills, in their recruiting efforts abroad.

Even if that work-visa order is not signed, the tightening of immigration rules sends mixed signals about American values, says Goswami.

“If you have a false understanding that there is not enough to go around so we have to limit [immigration], then you are going to go make a set of policies that go against your very nature,” he says.

Goswami’s concerns seem to be widely shared among other SXSW attendees. At panels and during parties in the evenings around Austin, Trump comes up in conversation after conversation.

Reddit founder Alexis Ohanian spoke on the opening day of SXSW — mainly about how Reddit could be a solution to the online trappings of social media echo chambers. But he also talked about how his mother was undocumented when she came to the US; his family escaped the Armenian genocide.

“I wouldn’t be here,” he said, if the US hadn’t opened its doors to his family.

More: Here's how to experience SXSW from your living room

Amid the uncertainty of how immigration to the US might change, some companies are concerned that professionals currently working in the US might choose to leave.

At least one entrepreneur at SXSW, has already done just that. Lauren Proctor, a US citizen, had a digital marketing business in New York, but got recruited to work in Estonia. She took the deal and left.

“I believe that in the past, great cities were built from ports,” she says. “Now it’s going to be built from the places that attract the smartest, most forward-thinking people. And Estonia in my opinion, is one of the places that really does that well right now.”

Related: The ‘Estonian Express Card’ offers a glimpse of the future of digital citizenship

Proctor says she is not anti-patriotic — she loves America and believes in all the people who have built tech companies here — but she says the quality of the job offer and the election of Donald Trump made leaving attractive.

She went to work for Jobbatical, a company that connects employers to tech professionals who are ready to move. Proctor says with Trump in the White House, they’ve seen a spike in people seeking to relocate.

“There are people from [Silicon] Valley, or from New York or strong entrepreneurs who are saying ‘Naw, I’m out of New York,’ or out of wherever, and, ‘I’m out of the US. I’m going to go and build this great tech scene in a new and emerging city,’” says Proctor.

Here at SXSW, there is still a buzz about the future that many in the tech world believe they are building. Whether that future innovation takes place in the US is a question many will be asking for some time to come.