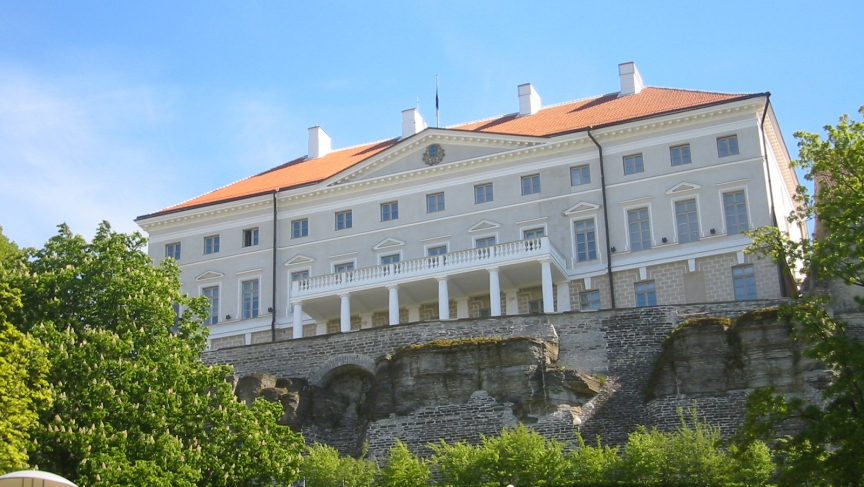 Stenbock House, the seat of the government of Estonia, is on Toompea Hill.

The tiny, tech-savvy country of Estonia is issuing digital ID cards to anybody who wants one. It could signal a future of borderless banking, reduced bureaucracy and even reimagined citizenship for a digital age.

Since the birth of the Internet, there have been problems with online identification. Take the New Yorker’s most often-copied cartoon, which show’s a canine at a computer saying, “On the Internet, nobody knows you’re a dog.” Now, the Estonian government’s digital identification card, which offers access to services while authenticating the user, seeks to change that.

“This is your passport to the Internet … the right to prove you’re not a dog,” said Edward Lucas, senior editor at the Economist.

Lucas says Estonia is the model of government in the digital age. He’s also the world’s first “e-resident,” having flown from his native Britain to Estonia this week to receive his own digital ID card, complete with microchip. The idea, according to the government, is to do for obtaining government services what the American Express card did for travel decades ago. A sort of "Estonian Express Card," if you will.

For Estonian citizens, the card is part of a national ID system that offers access to some 600 government services and another 2,000 private offerings. Estonians can file their taxes, sign official documents, pick up pharmacy prescriptions and vote for elected officials in a matter of minutes with a swipe and a click. Business owners who file paperwork with government agencies are not asked for the same information twice. And forget about long waits for a driver’s license at the DMV.

“It’s like seeing the future,” Lucas said. “You almost never have to go to a government office.”

For “e-residents” who live outside the tiny Baltic country, the benefits will be muted. It’s not a pathway to legal citizenship and most of the services don’t apply. But Lucas says it allows him to have a digital signature recognized anywhere in the European Union with government-backed biometric authenticity.

“I could open a bank account and actually open a company there — and that’s quite interesting for many of the people who live outside the European Union because Estonia is the most entrepreneurial, business-friendly country in the whole EU.”

For now, the move is still largely symbolic. Many Americans likely oppose the idea of a national digital ID card being issued by the federal government.

Then again, it could actually empower citizens concerned with government surveillance by the National Security Agency. Lucas said it allows Estonians to snoop on government snooping. “You can see whatever data the government has got on you. You have the right to see who’s looked at it.”