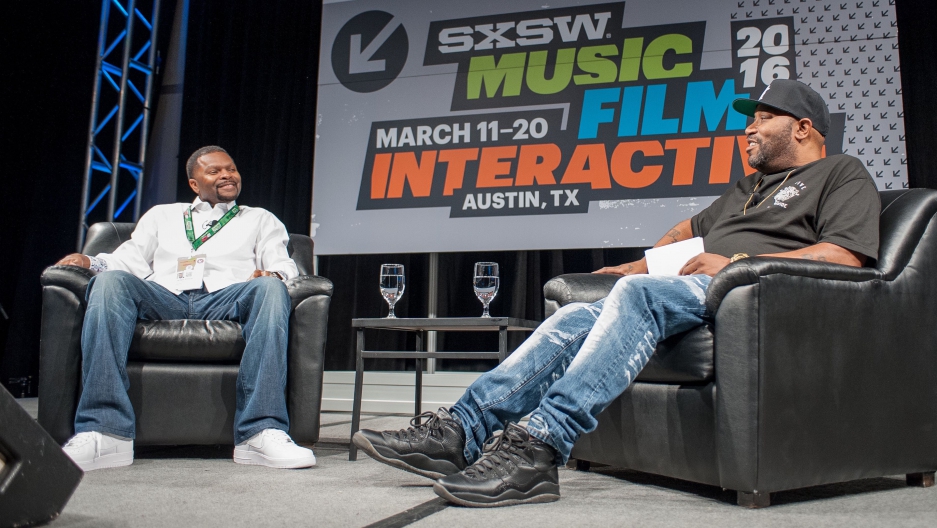 James Prince and BunB are shown at SXSW Music 2016.

The massive arts festival South by Southwest has just kicked off. It features everything from tech talks and movie premieres to stand-up comedy shows, podcast recordings, and of course, lots of concerts.

But if you can't make it to Austin, Texas, for the festival, don't worry — you can still enjoy it from the comfort of your own home, says Melissa Locker, the culture reporter for Time magazine, The Guardian and The Takeaway.

“If you want to recreate South by Southwest in your living room, you only need a few things: You’re going to need a few screens, like a television, an iPad, a computer, an iPhone — whatever you want — and then you set up your speakers and crank it up to '11,' or ya know, two, depending on how many neighbors you have,” Locker says. “Then crack open a beer or crack open some espresso, get a breakfast taco and settle in.”

This year’s festival includes tons of big musical acts like Solange Knowles; she's one of the performers headlining the YouTube showcase at SXSW and her performance and others will likely be broadcast on video-streaming platforms.

“Some [bands] are going to be streaming, but the other good thing is that these are bands you can find on the magic of the internet,” Locker says. “You can go on to a lot of streaming platforms like Bandcamp or Spotify, and you’re going to be able to find all of these artists and create your very own playlist, and crank it up as loud as you want and pretend that you’re curating your very own South by Southwest showcase in your living room.”

In all, there are over 500 musical acts performing during the course of the nine-day festival, and Locker especially recommends that listeners check out artists Julie Byrne, Tkay Maidza, the Lemon Twigs and Lillie Mae.

In addition to music, there are a number of keynote speakers to pay attention to, including Nile Rodgers, founder of the band Chic, producer and director Lee Daniels, Jill Soloway, creator of the Amazon show “Transparent,” country musician Garth Brooks and even former Vice President Joe Biden, just to name a few. Reddit will also be livestreaming “ask me anything” or AMA sessions from SXSW.

“There’s politics, there’s gadgets, there’s movies [at SXSW],” says Locker. “If you go to SXSW’s YouTube channel right now, you can see so many trailers for the movies that are going to be premiering at SXSW. … There are some incredible live comedic performances — Dan Harmon is going to do a live, improvised version of the 'Dungeons and Dragons' game.”

There are a number of live podcasts and stand-up comedy recordings that will be streamed from SXSW, and Locker recommends catching Wyatt Cenac's act.

“Podcasts and comedies are great because a lot of times that stuff is going to come live on the internet [and stay online], so you recreate South by Southwest whenever you want — breakfast taco in hand,” she says.