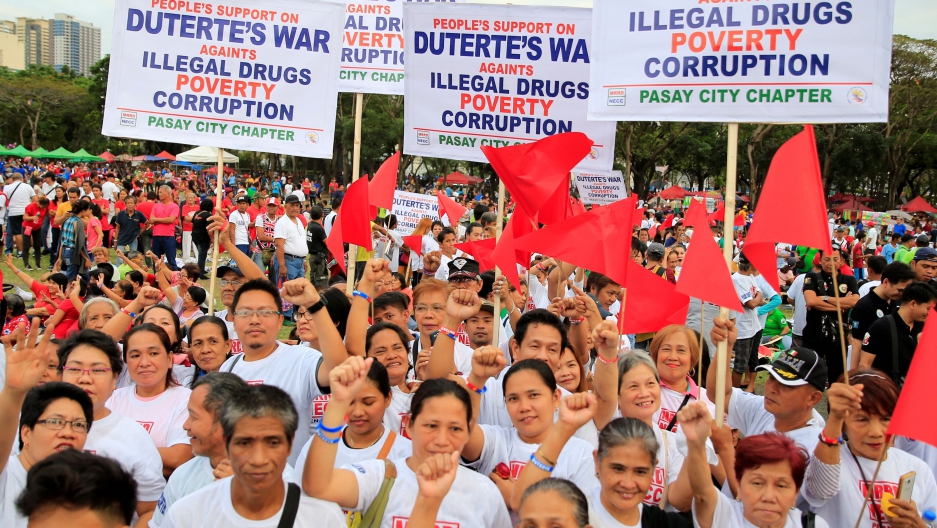 Philippine President Rodrigo Duterte supporters gather during a vigil backing the anti-drugs crackdown at the Luneta park in metro Manila, Philippines, on Feb. 25, 2017.

Thousands of supporters and foes of President Rodrigo Duterte joined large rallies in Manila on Saturday, highlighting how his brutal drug war has polarized the Philippines.

A prayer rally for Duterte's eight monthslong anti-narcotics crackdown drew the biggest turnout, estimated by police at up to 200,000 although AFP reporters said it looked a lot less.

"Your presence here showcases the strong support that your president continues to enjoy," Justice Secretary Vitaliano Aguirre told the crowd at the prayer rally, who lit candles and sang religious songs.

The 71-year-old president, who spent the weekend in his southern home city of Davao, won the election last year after promising during the campaign to eradicate drugs in society by killing tens of thousands of people.

He launched the crackdown after taking office in June and police have reported killing 2,555 drug suspects since then, with about 4,000 other people murdered in unexplained circumstances.

Duterte critics including ex-leader Benigno Aquino and Vice President Leni Robredo, who was elected separately from the president, joined one of the other rallies held near the national police headquarters in Manila.

This gathering marked the 31st anniversary of the victory of a pro-democracy movement that culminated in a bloodless "People Power" revolution that ended the Ferdinand Marcos dictatorship.

Some at this rally criticized the drug killings, many of which have been described by international foreign monitors as state-sanctioned murder.

The protesters warned they foreshadowed another dictatorship. By nightfall some sections of the protesters were openly calling for Duterte's removal from office, chanting "Down with Duterte."

"We are warning our people about the threat of rising fascism," protest leader Bonifacio Ilagan told AFP after leading more than 1,000 protesters at another rally earlier Saturday.

Ilagan, a playwright who was tortured over two years in a police prison under Marcos' martial rule in the 1970s, cited the "culture of impunity" arising from Duterte's crackdown.

Duterte, who ranks Marcos as one of the country's best-ever presidents, has not ruled out using martial law himself to prevent what he describes as the country's slide to narco-state status.

Wearing a black shirt, Aquino marched alongside political allies and around 2,000 other protesters.

He denounced the government's treatment of Senator Leila de Lima, the top critic of the Duterte drug war, who was arrested on Friday and faces life in prison if convicted of drugs charges.

De Lima, Aquino's former justice minister, said the arrest was an act of revenge for her decade-long efforts to expose Duterte as the leader of death squads during his time as mayor of Davao.

"Not only Congress, but other pillars of Philippine democracy should be deeply worried," the official from the US-based rights monitor added.

At one point during the rally attended by Aquino, tempers rose as several protesters confronted a dozen young people who raised clenched fists while holding up a pro-Duterte banner nearby.

"Why did you sell your soul?" a white-haired man in a black shirt said, jabbing his finger at one of the Duterte supporters and telling him the president was "responsible" for drug-related murders.

"They [deaths] are still being investigated," the young man replied calmly.

Television footage showed police hosing down a group of at least 100 people protesting the drug killings, though no one was seriously injured.

In a separate demonstration Saturday, around 150 anti-Marcos protesters chanting "Exhume him" marched on the cemetery where he is buried, but riot police stopped them near the gate, an AFP photographer saw.