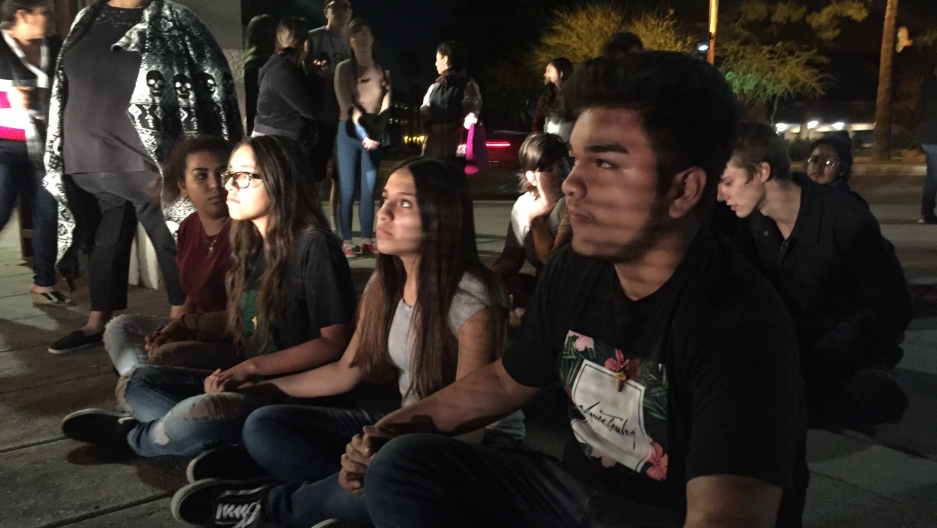 The son and daughter of Guadalupe García sit before an Immigration and Customs Enforcement bus with other protesters in Phoenix to prevent García's deportation. She was detained the night of Feb. 8, 2017. Both of García's children are US citizens.

Guadalupe Garcia de Rayos’ deportation to Mexico from Arizona this week was the last chapter of a long nightmare for her family. It began in 2008 with a knock on the door by sheriff’s officers.

The day of that raid was still fresh in the memory of her 16-year-old son, who spoke Wednesday minutes before his mother went inside the Phoenix Immigrations and Customs Enforcement office for an annual check-in with federal authorities.

“I was in second grade, I was laying in my bed sleeping when I see a flashlight and I know what is happening,” recalled Angel Rayos, Guadalupe’s 16-year-old-son. “But I stay quiet for a little bit, then I go outside. The door was open and my mom was being handcuffed by two sheriff’s officers.”

“She got taken away,” said Angel. “They took her and that’s when my aunt came inside and told me to calm down. I was confused. I was too young to know what was happening. Since then, we had to live with constant fear that at any moment our mom could be taken away.”

Garcia was arrested at her home as part of the first worksite raid conducted by former Maricopa County Sheriff Joe Arpaio in December 2008. The sheriff first took office in 1993 and was repeatedly re-elected on a platform of enforcing anti-illegal immigration policies and state laws. His practices, though, have landed him in court; he is facing lawsuits for racial profiling and other civil rights violations. He campaigned for Donald Trump but lost his seat as sheriff in the election last year.

More about Arpaio: What you need to know about the criminal case against Sheriff Joe Arpaio

The tactics Arpaio used to arrest Garcia and others are being challend in federal court.

And that brings us back to this week, nearly a decade after the raid. Garcia was detained Wednesday and deported to Mexico on Thursday morning after an outpouring of public support. Hers is one of the first known cases of a deportation under President Trump’s executive orders that make it a priority to deport immigrants with criminal records and, broadly, anyone who could be thought of as a criminal.

One of the two immigration-related executive orders Trump signed on January 25 prioritizes the deportation of any "alien" — a term for documented and undocumented immigrants — who is convicted, charged or could be charged with a crime. It also gives individual immigration agents broad power to decide who should be deported, stating that the Department of Homeland Security should prioritize deportation of those who “in the judgment of an immigration officer, otherwise pose a risk to public safety or national security.”

For nine years, Garcia showed up every year to check in with immigration officials, a practice not uncommon for undocumented immigrants with pending cases. During that time, she was given work authorization each year as the stay on her deportation was renewed. 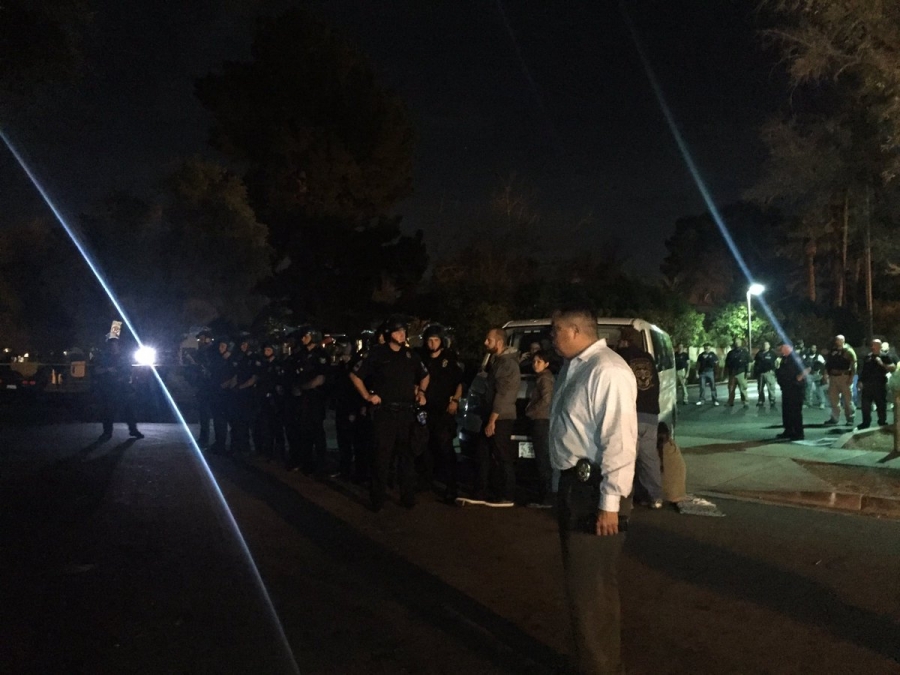 Phoenix police get ready to arrest seven people who blocked an immigration van in Phoenix on the night of Wednesday, February 8, 2016. The van was transporting Guadalupe Garcia, who was detained after a scheduled check-in with immigration agents.

This time at her appointment, though, Garcia was told she would be deported — immediately. She was surrounded by family and supporters from Puente Arizona, an immigrant-rights group who protested her detention. Some 200 people, including undocumented immigrants who could also be facing deportation, chanted: “You’re not alone.”

Also: More Mexicans are crossing the border — to leave the US. Here’s one family’s story.

Garcia, a 36-year-old mother of two US citizen children, was brought to the US with her family from Guanajuato, Mexico when she was 14. She worked for 10 years as part of a cleaning crew for Golfland Entertainment Centers, a company in Arizona that owns several water parks, and was the target of Arapaio's 2008 raid. Unlike some of her coworkers who were arrested at work, she was detained at home several months later and accused of using fraudulent identification to gain employment.

She eventually pleaded guilty to impersonating a legal worker, a class 6 felony. She spent six months in jail and immigration detention.

Her conviction was one of the reasons ICE says they deported her. They also said in a statement that they were following a court order for her removal dating back to 2013. Federal authorities under the Obama administration had allowed her to stay in the country. Civil rights attorneys say they might have done so because she has family in Arizona and because the US Justice Department and advocates had filed lawsuits over Arpaio’s raids and policies.

According to her attorney Ray Ybarra-Maldonado, she should have never been convicted in the first place. On Wednesday night, he asked federal officials to grant her a chance to stay in the country so they could use new findings in the ongoing lawsuit that challenge Arpaio’s conduct; new evidence, says Ybarra-Maldonado, could be grounds for Garcia’s conviction to be reversed.

But they needed time to pursue the case.

“This worksite raids were conducted in a way that had multiple and systematic legal violations and the people who were arrested and detained in the raids should be seen as witnesses to civil rights violations,” says attorney Annie Lai, a co-director at the UC Irvine Immigrant Rights Clinic. Lai says she believes that's one reason the Obama administration granted Garcia a stay of deportation. “It’s because they recognized the unfairness of trying to deport people who were witnesses to civil rights violations, that the federal government is charged with trying to enforce.”

Lai says Garcia’s case is not unique because it opens up questions about who is considered a criminal, and the role that discriminatory practices play in minorities having criminal records.

In 2015, the Department of Justice settled a lawsuit against Arpaio’s office related to constitutional violations during worksite raids as well as racial profiling. In 2013, a federal judge ruled that the Maricopa County Sheriff’s Office engaged in racial profiling against Latino drivers. Lai was part of the American Civil Liberties Union team that won that lawsuit.

She is now the lead attorney in Puente vs Arpaio, which could have an indirect impact on Garcia’s case. In November, a federal judge decided some of the federal documents used as the basis for the worksite raids cannot be considered evidence against the workers. That ruling, say attorneys, could be the basis to open a new case to overturn Garcia’s conviction.

But now that Garcia has been deported, she has very little legal recourse to return to the US, says Ybarra-Maldonado. “This is horrible. There is a very good argument that we could have investigated to fight her criminal convictions. We said there in the motion [to ICE] that we wanted six more months to do that,” he says.

Ybarra-Maldonado confirmed on Thursday afternoon that she had indeed been deported to Nogales, Mexico. Her daughter said they packed her a suitcase. Garcia, her family says, is from Guanajuato, about 1,000 miles south of the border, in Sonora.

Her husband, Aaron, is also undocumented and preferred not to be identified with his last name for fear that he too would be deported. He told PRI’s The World that he is mostly worried for their children.

“I’m not too much worried about myself, I’m just worried about her and my kids,” he says. He says Mexico’s education and quality of life are not the same as in the US and what he and his wife wanted to do was give their US-citizen children opportunities.

The family’s lawyer appealed to those who support the deportation in a press conference Thursday: “To anybody out there, what was Guadalupe doing last week that was causing you harm? Absolutely nothing. These executive orders on public safety are a complete sham. They have nothing to do with public safety,” Ybarr-Maldonado said.

Phoenix Mayor Greg Stanton agreed, and said the city would not sign agreements with the federal government that give power to local police officers to act as immigration agents, under section 287(g) of the US Immigration and Nationality Act. It's a program Arpaio used as sheriff.

“Last night’s events show President Trump’s mass deportation plan makes our country less safe,” he said in a statement on Thursday. “Rather than tracking down violent criminals and drug dealers, ICE is spending its energy deporting a woman with two American children who has lived here for more than two decades and poses a threat to nobody. It is outrageous, and precisely why, as long as I am mayor, Phoenix will not participate in the 287(g) program or enter into any other agreements with the Trump Administration that aim to advance his mass deportation plans.”

Guadalupe Garcia de Rayos in the van. Reflection is her son Angel, 16. pic.twitter.com/cZMjdUi67C

One reporter at the press conference asked for advice for people like Garcia, who could be deported. He asked if undocumented people should go into hiding.

"I know if it were my family, I would not show up," said Carlos Garcia, the executive director of Puente, referring to scheduled meetings with immigration officials. "They can no longer trust the process. Not once did they allow Guadalupe to call her attorney or her family."

On Wednesday, Garcia’s detention at the ICE offices drew several acts of civil disobedience and protests of the kind many say is likely to continue. The first came from her own children who stood in front of an ICE bus to prevent it from transporting her away. Then seven activists stood for hours in front of the van that was transporting Garcia. They were arrested by Phoenix police and are facing charges of obstruction of the thoroughfare and interfering with government operations, according to an official statement from the police department.

Among those arrested was Angeles Maldonado, Garcia’s attorney’s wife. After she was released, she want to a Thursday evening vigil for Garcia.

“I think what she did was very brave, to know in a sense that she was sacrificing herself by going out there and confronting this huge administration that is trying to take her out," says Maldanado. "I think that she’s inspired a lot of people including myself.”