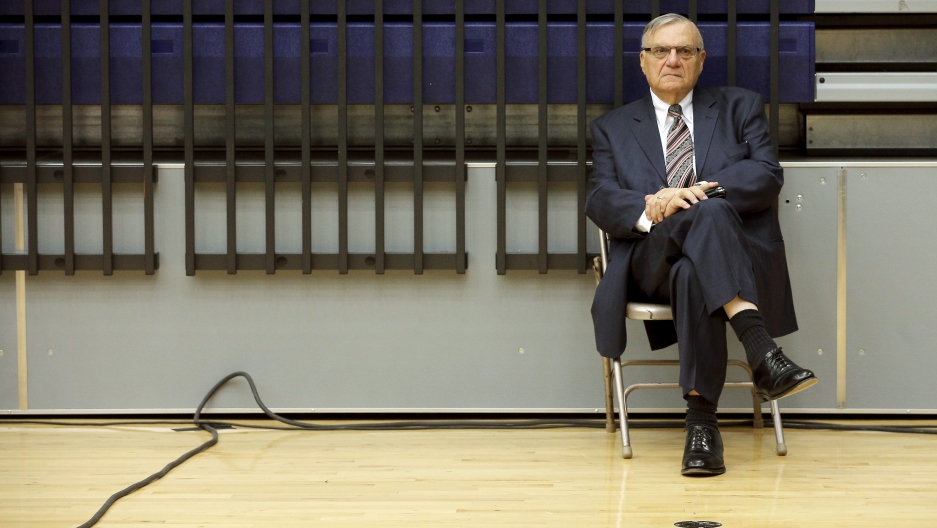 US Justice Department lawyers are pursuing criminal contempt of court charges against Maricopa County Sheriff Joe Arpaio for his violation of a federal judge’s order in a racial profiling case.

Arpaio is known nationally for pioneering local strategies for taking on illegal immigration. The criminal charge relates directly to his continued efforts to arrest suspected unauthorized immigrants even after a federal judge told him to stop.

The paperwork formally charging Arpaio was expected to be filed Wednesday.

The case will center on a federal judge’s earlier finding that Arpaio willfully disobeyed a court order to halt immigration arrests.

In 2011, US District Court Judge Murray Snow forbade Arpaio from arresting people solely for being in the country without lawful status because he said local police departments did not have the authority to enforce federal immigration laws.

Later it came out that Arpaio had continued making those arrests for at least 18 months after Snow determined they were unconstitutional and had to stop. In May, Snow concluded that Arpaio had purposely ignored court orders in an effort to maintain his hardline immigration reputation ahead of his 2012 election.

Criminal contempt of court is used to punish someone who has intentionally violated a judge’s orders, but these types of cases are unusual.

Meanwhile, Arpaio is in the midst of running for his seventh term as sheriff. The announcement that he will face a criminal charge came just a day before early voting begins in Arizona and four weeks before the Nov. 8 election.

While critics of the sheriff who oppose his immigration enforcement tactics were relieved to hear the criminal case would go forward, Arpaio called the announcement a blatant abuse of power by the federal government.

“It is clear that the corrupt Obama Justice Department is trying to influence my re-election as sheriff of Maricopa County,” Arpaio said in a statement released Tuesday afternoon. 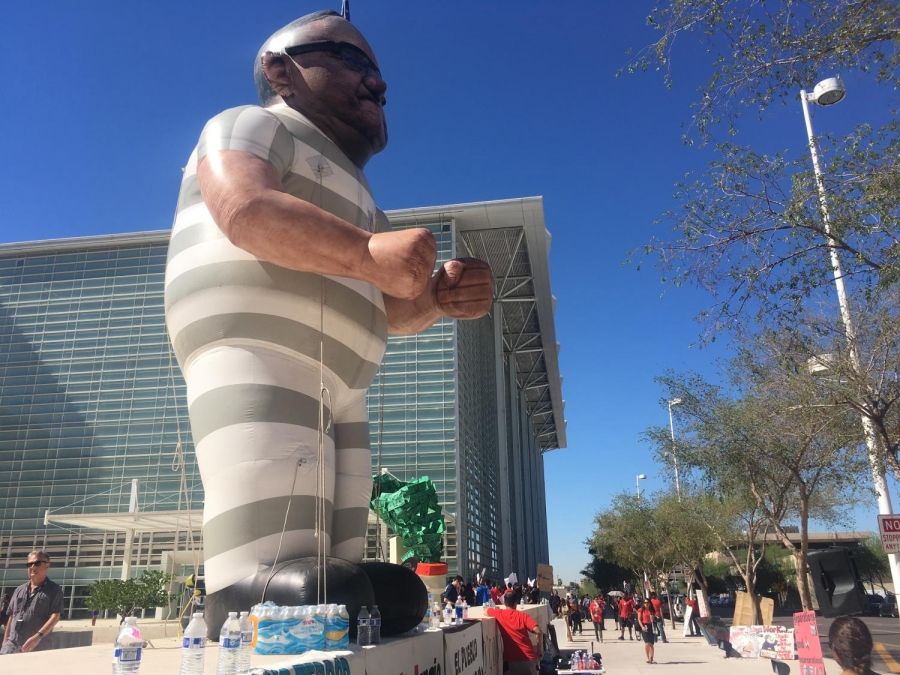 Sheriff Joe Arpaio's opponents rally in front of the federal courthouse after US Justice Department lawyers announced on Tuesday, Oct. 11, 2016, that they will bring criminal contempt of court charges against the sheriff.

After Arpaio started to zealously crack down on unauthorized immigrants in the mid-2000s, Latino drivers brought a class-action lawsuit against the sheriff in 2008 that accused him of racial profiling.

In May 2016, Snow found Arpaio in civil contempt of court after a lengthy contempt hearing the previous year. Though Arpaio argued his violations of court orders were unintentional, Snow concluded the sheriff’s actions were willful.

In August, Snow asked the US attorney for Arizona to bring criminal contempt of court charges against Arpaio and three other members of the sheriff’s team.

“The court has exhausted all of its other methods to obtain compliance,” Snow wrote in his explanation for why a civil contempt finding alone was not adequate.

Snow also made clear that a new judge should oversee the criminal case if it went forward, and US District Court Judge Susan Bolton was assigned by lottery.

In late August, the US Attorney for Arizona John Leonardo recused himself from investigating a criminal case against the sheriff. The investigation was passed to the Department of Justice’s Public Integrity Section, which specializes in cases against government officials.

Tuesday’s hearing was billed as simply an initial status conference with all the parties. Heading into the meeting, it was still unknown if the Justice Department intended to bring charges against Arpaio.

It came as a surprise to many in the courtroom when DOJ lawyer John D. Keller announced his office would prosecute Arpaio on at least one count of criminal contempt of court for defying Snow’s order and continuing to make immigration arrests.

Arpaio’s criminal defense attorney Mel McDonald said he was expecting DOJ lawyers would make a formal request to the judge in court filings if they wanted to pursue criminal charges, rather than simply announce it at Tuesday’s hearing.

“I was actually surprised the way it went today when they made the announcement,” McDonald said after court.

Keller is expected to file an order to show cause on Wednesday that Bolton will sign. The document will serve as a charging document in this case. Bolton set an initial trial date of Dec. 6.

McDonald said the sheriff will enter a not-guilty plea.

“All along he admitted that mistakes were made,” McDonald said. “Our position is and always had been that there was no willful violation of the judge’s order.”

He also said he will ask for the trial to be pushed back substantially to prepare his criminal defense.

Keller said he would be willing to agree to pursue a penalty of six months of prison time or less against Arpaio because of the sheriff’s advanced age of 84. He said that would also waive Arpaio’s right to a jury trial.

After court, McDonald said he believes Arpaio should be judged by a jury of his peers.

Cecillia Wang, a lawyer for the American Civil Liberties Union that brought the underlying racial profiling lawsuit against Arpaio, applauded the decision by the Justice Department to prosecute the sheriff.

“Sheriff Arpaio’s conduct violating court orders was willful and deliberate and therefore criminal in nature,” Wang said in a statement. “Justice is well pursued through the criminal prosecution in this case.”

An election around the corner

Outside the courthouse activists who oppose Arpaio rallied Tuesday with a giant balloon of the sheriff’s likeness wearing prison stripes. They chanted, “Joe Arpaio is guilty guilty, the whole damn system is guilty, guilty.”

While the sheriff’s opponents were glad to hear a criminal case would go forward, many said their more pressing goal is to ensure Arpaio doesn’t win re-election in November.

Parris Wallace is with the Bazta Arpaio campaign, which seeks to get Arpaio voted out of office.

“The people of Maricopa County will remove Sheriff Arpaio before his next court date,” Wallace said. “I mean, we are tired of him thinking he is above the law and making everyone else pay for his abuses.”

County taxpayers have already spent close to $50 million in legal expenses related to the racial profiling lawsuit against the sheriff. But Arpaio is responsible to pay for his own criminal defense.

Arpaio’s campaign manager Chad Willems said the Justice Department’s announcement of criminal charges so close to the election was an abuse of power by the Obama administration.

“Anybody out there who thinks that this was not politically motivated or tainted through and through with politics is living on a different planet,” Willems said. “I think voters are going to reject it and I think they are going to stand up and join the sheriff in this fight. This is total garbage.”

In a statement, Arpaio lashed out at the Obama administration and sounded much less contrite than he had when defending himself in the civil contempt of court case.

“As your elected sheriff, my job is to enforce the law,” Arpaio said in the statement. “Because enforcing illegal immigration laws is not politically correct, within the first 100 days of taking office, Obama put then-Attorney General Eric Holder in charge of pursuing a ‘racial profiling’ case against me — among other trumped-up, failed legal pursuits — and eight years later they’re still pursuing the case.”

“Now, with Obama on his way out of office, he and DOJ officials know this is their last shot at taking me down,” Arpaio’s statement continued. “This highly unusual charge of criminal contempt against an elected local official should be seen for what is really is: a political maneuver by a corrupt administration to damage me politically and a continuation of its war on cops.”

Former Phoenix Police Department Sgt. Paul Penzone is running against Arpaio as a Democrat. He did not miss the chance to weigh in on his opponent’s legal woes.

“No one is above the law, and today’s announcement in court epitomizes the strength of the judicial system,” Penzone said in a statement. “I have utmost confidence that our voters will make the right decision to repair the damage that has been done to our community.”

But in court on Tuesday the parties agreed to have those issues proceed separately.

Those matters have to do with violations of court orders that occurred after Snow had already initiated civil contempt of court proceedings in early 2015 to address earlier instances of disobedience by the sheriff and his staff.

In April 2015, the civil contempt case took a major turn when Arpaio revealed under questioning from Snow that he had hired a confidential informant named Dennis Montgomery to do a secret investigation using documents Montgomery allegedly told the sheriff he obtained from the Central Intelligence Agency.

Snow instructed Arpaio to turn over all documents from that investigation and to personally see that it was taken care of. But three months later, the independent monitoring team Snow assigned to oversee reforms at the sheriff’s office discovered the sheriff had failed to comply.

The monitoring team found out that Arpaio and his team failed to turn over 50 computer hard drives from Montgomery.

In May, Snow concluded that both Arpaio and Sheridan intentionally gave false testimony about the Montgomery investigation under oath.

In a separate incident, the monitor also learned the sheriff’s staff did not disclose that a sergeant had been hoarding a stash of 1,459 identification cards — even when the monitoring team asked directly. An earlier court order had required the sheriff’s office to turn over such IDs to the court, after evidence surfaced suggesting deputies were improperly taking property and IDs from Latinos.

As a result, Snow ordered US Marshals take custody of the 50 hard drives and the IDs in July 2015.

Keller told the court Tuesday that he was concerned the statute of limitations had run out to charge those two violations as criminal contempt of court. He said the Justice Department was investigating whether to bring obstruction of justice charges instead.

Bolton seemed to disagree on the statute of limitations and said she wanted to research the issue further. She pointed out that Arpaio’s defense team had stalled the contempt case by asking Snow to recuse himself from the case, which had slowed the proceedings. She has asked the parties to submit briefs on the issue.

This story originally ran on KJZZ.org.