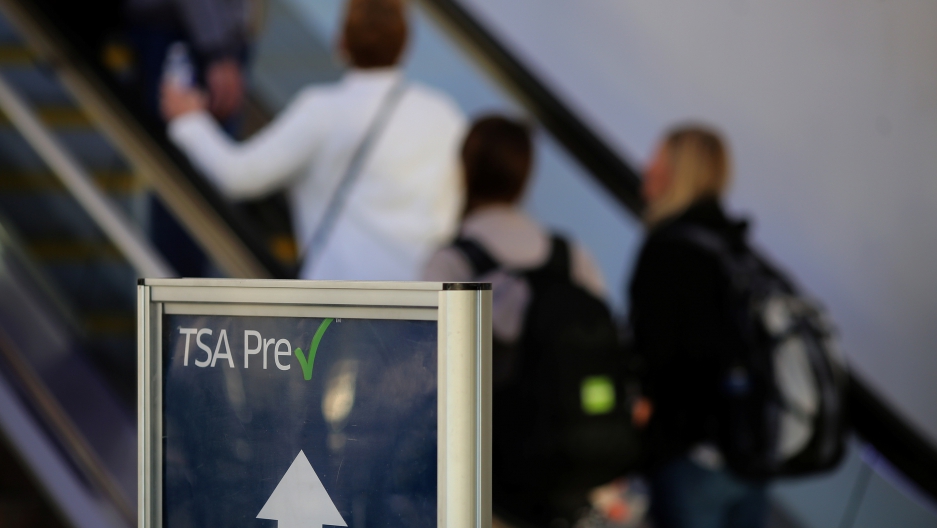 Travelers take an escalator to a TSA Pre-check entrance as they pass through Los Angeles International Airport in November 2016.

On Sunday night, my dad was going through the security line at Washington Dulles International Airport to board a short domestic flight. It was, by his account, an uneventful evening, away from the protestors who were awaiting international arrivals.

According to his boarding pass, he'd been granted TSA Pre-check, the Transportation Security Administration protocol to expedite screening for passengers given an advance background check and deemed low-risk. Passengers can register for the program or, what is likely in this case, it is given to older travelers who don't fit the profile for a threat.

Still, he was directed to the regular security line anyway.

ID and boarding pass: Check. Bag, wallet, phone on the belt: check. Full body scanner: 1...2...3. Problem. He was asked to step aside by a security agent.

Instead of the public pat down or the hand-held metal detecting wand waved around travelers who has some sort of anomaly, he was taken into the separate room and asked to lift up his shirt, remove his shoes, pants and pull down his underwear. A visual check and pat down by a male TSA agent followed. He did as he was told.

They found nothing that would pose a threat and allowed him to board his plane without further inspections.

My dad is 68. He is a short, slight, bespectacled man who was born in India and has been an American citizen for 17 years. He had a green card, a visa for a legal permanent resident, for a nearly a decade before then. This was a domestic flight. So when he told me what happened, I had so many questions.

Had they seen his poonal, the sacred thread worn by some Hindu men across their chest? Was it because he had forgotten something in his pockets? Maybe he was just randomly selected for a search. He did not ask and was not told.

There is no evidence this search was related to the executive order that President Donald Trump signed on Friday. The TSA, I believe, has a difficult job in keeping us all safe and most employees are doing the best they can within the guidance they are given. I did not want to accuse anyone of wrongdoing, but I shared my dad’s story on Twitter because the strip search of an American citizen boarding a domestic flight is the type of security measures so many of us could face regularly because of Trump’s policies.

Last Wednesday, after signing his first two executive orders on immigration, Trump told the Department of Homeland Security, "From here on out, I'm asking all of you to enforce the laws of the United States of America. They will be enforced and enforced strongly." While he was directly addressing Customs and Border Patrol and Immigration and Customs Enforcement agents, TSA also falls under the purview of homeland security.

His order calls for hiring 5,000 more border patrol agents and tripling the number of immigration agents.

These words and actions send a signal: Safety takes precedence over anything else.

As of Friday, the my dad’s story has been shared thousands of times on Twitter and I’ve gotten more replies than I can count. Most people, of many ethinicities, offered support — their sincerity made me tear up. Some people said, “I’m sorry this is happening,” while others said, “This is not our country.” I also don’t believe my dad’s experience in “extreme vetting” at Dulles is the same America where my brother and I have grown up since the 80s.

We need to follow the rules. We need to be polite to TSA and other federal agents. But we can’t stop resisting.

You and I are next. https://t.co/dlKn9rrvfJ

The TSA has been sued for conducting strip searches and for racial profiling. In 2015, the agency settled a lawsuit with a woman who says she was pulled off a plane, detained and told to undress. A communications officer at TSA told PRI that asking a passenger to undress is against their policies. “TSA screening policy does not call for, ask or require passengers to undress,” he said, and offered more information about pat downs and the security process on their website.

My parents do not want to pursue a complaint, but they do want people to know what happened. There may be immigrants on visas or legal permanent residents who are scared to come forward about similar incidents, so I felt it was my responsibility to use my privilege as a US citizen to speak out. 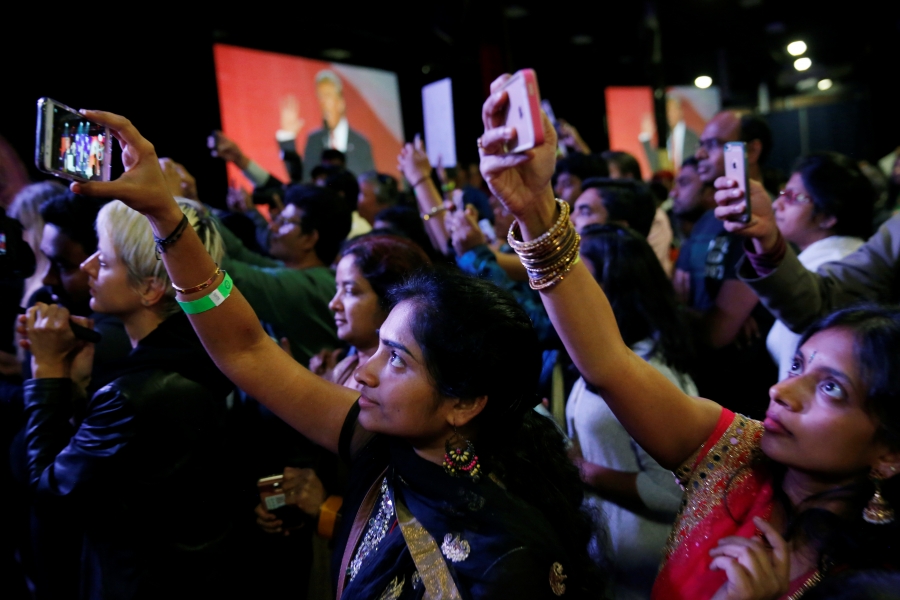 Attendees watch Republican presidential nominee Donald Trump speak at a Bollywood-themed charity concert put on by the Republican Hindu Coalition in Edison, New Jersey, on Oct. 15, 2016. Trump said during the debate on Wednesday that he met with “high representatives of India.”

In the run-up to the election I saw pictures of Bollywood-esque dancers, aunties and uncles clad in their best silk outfits, putting on as a fundraiser for then-candidate Donald Trump.

Some people liked that he is a businessman and thought he would protect corporate interests. Others were drawn in by his promise to ease visa restrictions on incoming Indians. Others simply did not want Hillary Clinton to win.

Underlying all this, though, was, "Well, we're not them," as one family friend explained it to me in August. He believed that Hindus are exempt from Trump’s ire because we’re mostly not black, Latino or LGBTQ. And certainly not Muslim. We are the “good kind” of American immigrant, your doctors and IT guys.

In turn, I explained that all brown and black and Asian people look the same to the scared and ignorant.

On Tuesday, the Republican Hindu Coalition issued a statement in support of the immigration order that bans refugees and immigrants from certain countries from entering the US. They called for more people from Muslim-majority countries be added to the list of those who will not be allowed visas.

I’m ashamed they would equate terrorism with Muslims, given that acts of domestic terrorism in Newtown, Charleston and Oak Creek were committed by white men. I’m ashamed they came here from India, a diverse place in so many ways, and are now only in favor of a limited definition of diversity that seems to include the majority and other Indian Americans just like themselves. While most Indian Americans lean left, as do most Hindus, it bothers me that this minority group of Trump supporters can influence policies.

My dad’s experience at Dulles is just one of many negative outcomes that this group — even If unwittingly — advocated for. Divya Shridhar, a recently naturalized US citizen and family friend, was in a grocery store with her 6-year-old daughter in their Cleveland, Ohio, neighborhood recently when someone yelled at her and praised Trump.

On Twitter, a new hashtag has surfaced in reaction to the Republican Hindu Coalition’s very visible position. It’s #HindusResist, created by Deepa Iyer, an author and senior fellow at the Center for Social Inclusion who has written about civil rights and the effects of profiling.

After what happened to my dad on Sunday night, I can’t help but throw my support behind it too.