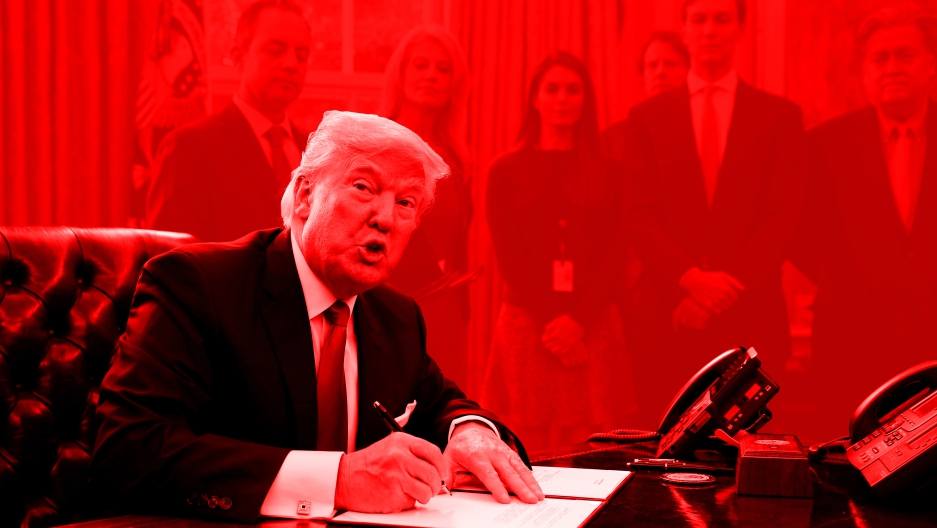 Americans started drawing parallels between Orwell's realities and the Trump Administration as early as his first day in office, when Press Secretary Sean Spicer berated and lied to the media in his first briefing.

Illustration by Brandon Hundt/PRI, based on a photo by Kevin Lamarque/Reuters

For about a year, journalists and writers have been drawing parallels between Donald Trump's vision for America and George Orwell's dystopian fiction. That vision is now the United States' reality.

After Trump took office, on Saturday he sent his press secretary out to berate and lie to the press. On Sunday, his senior adviser called the lies "alternative facts." The Washington Post's media columnist Margaret Sullivan declared we've gone "full Orwell."

"In '1984,' however we’ve gotten into that situation has already occurred," Woloch says. "But in 'Animal Farm,' [Orwell is] really tracing that sense of a 'slippery slope.'"

Woloch is referring to the "slippery slope" scholars on authoritarian regimes call the transition from democracy to totalitarianism.

"And there does seem to be a sense that you're playing with fire with these kind of things — the deliberate use of falsehoods in a political context, the attacks on the media," Woloch continues.

There's continuity to Trump's approach: Remember his incitement of anti-media crowds at political rallies? And the lies he told during his campaign? If you don't remember those, see this archive of them by the Toronto Star. They're categorized and enumerated.

Woloch asks: What signs of damage to the democracy should Americans be on the lookout for as President Trump's term unfolds?

Throughout the presidential campaign, Lawrence Rosenthal of the Center for Right Wing Studies at UC Berkeley was keeping an eye on then-candidate Trump, looking for three signs of authoritarianism:

"I don’t know the answer to when the line is crossed," Rosenthal says. "The point is to be smarter than the frog in the pot and say, at least, 'Let’s pay attention to the water heating up.'"

Five days into Trump's presidency, here is where some of his administration's actions fall, based on Rosenthal's list:

Rosenthal cites the Trump campaign’s "blacklisting" of media outlets that displeased him as an example.

But there are instances now, during the Trump presidency, as well. This week, the president's chief White House strategist Stephen Bannon told The New York Times the media is "the opposition party," and "should be embarrassed and humiliated and keep its mouth shut and just listen for awhile."

Last week, after three times as many people showed up to the Women's March on Washington as to Trump's inauguration, the president tweeted his reaction:

Watched protests yesterday but was under the impression that we just had an election! Why didn't these people vote? Celebs hurt cause badly.

When the media reported on the turnout, Trump dispatched Press Secretary Sean Spicer to allege fraudulent reporting, despite clear photographs depicting crowd size, and despite analysis from crowd scientists. Additionally, Spicer claimed the DC Metro had never seen more ridership as on Trump's inauguration day, which was a lie.

"When the press secretary, at Trump's insistence, kind of makes up this comment about how many people rode in the Metro [for his presidential inauguration]," Woloch says, "it's pretty innocuous on one level. I guess the danger is once there's not a commitment to accuracy, there can be an evermore aggressive enforcement of that [inaccuracy]."

Changing the norms of the democracy

On Tuesday, the White House clamped down on public communications from federal agencies — specifically those dealing with health and science.

The Environmental Protection Agency, the Department of Agriculture and the Department of Health and Human Services have been subjected to varying bans on communicating scientific facts to the public, including information regarding climate change. Government agencies regularly share this kind of scientific information via social media. No more — at least not without high-level review.

However, following the gag order, several "rogue" Twitter accounts have appeared, tweeting facts now banned by the White House. Several of those also state they are not managed by government employees.

At the Republican National Convention, where Trump accepted the party's presidential nomination, the Colorado delegation refused to cast its votes for now-President Trump.

In the end the party came together, and several other state delegations declared their allegiance to the then-nominee. This might not indicate with certainty that the Republican Party will fully comply with President Trump's agenda.

But since he has taken office, Trump signed an executive order banning aid to foreign groups that provide abortion counseling, and a handful of bills to restrict abortion have been introduced in Congress — including one proposing banning abortion when a heartbeat is detected.

And before the start of Trump's term, Rosenthal pointed to the North Carolina Republican Party's attempt to limit the power of the red state's incoming Democratic governor.

"Is this creating an environment where political opposition can’t participate?" Rosenthal asks. The conditions he looks at, as a scholar of right-wing movements, are looking out for this. "This leads in the direction of an authoritarian state inasmuch as it leads to one-party rule."

But there’s another thing Trump's government might just lead to: the next George Orwell.

"[Trump's election] is a pretty seismic event," says Woloch, the literature professor. "It's going to change how writers today are writing."