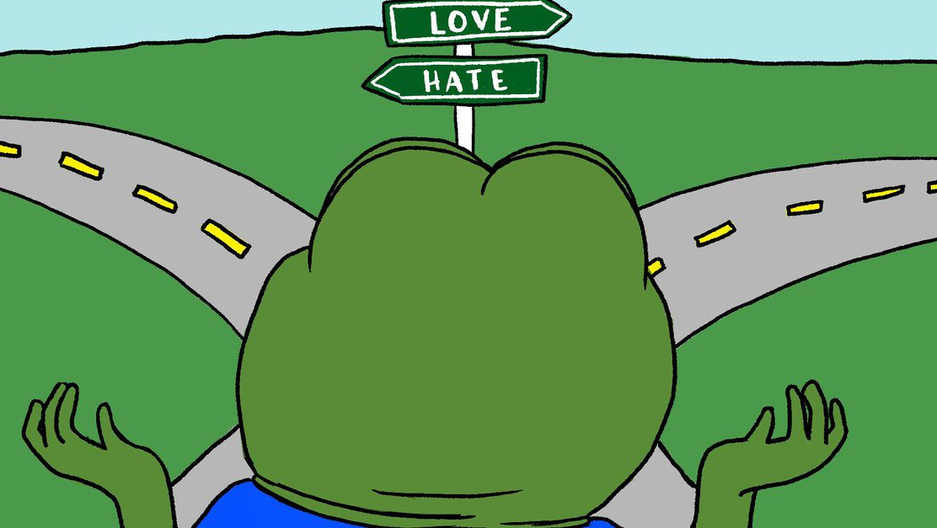 The meme "Pepe the Frog" has become a symbol for the alt-right on the internet.

The term "alt-right" has existed for a while, but surfaced more prominently during the US presidential campaign — and especially in the aftermath of the election.

Journalists and social media users apply the label, short for "alternative right," to a broad range of people. Too broad, according to University of Georgia professor Cas Mudde.

"I don't particularly like the term, because ... in its current use, it goes from pretty much neo-Nazis to conservatives," Mudde says. "And on top of that, because it is so broad, it is normalizing white supremacist [thinking]."

Mudde's analysis of this movement is the same as the Anti-Defamation League's: the so-called alt-right are people who "reject mainstream conservatism in favor of forms of conservatism that embrace implicit or explicit racism or white supremacy."

But how does the alt-right see itself? 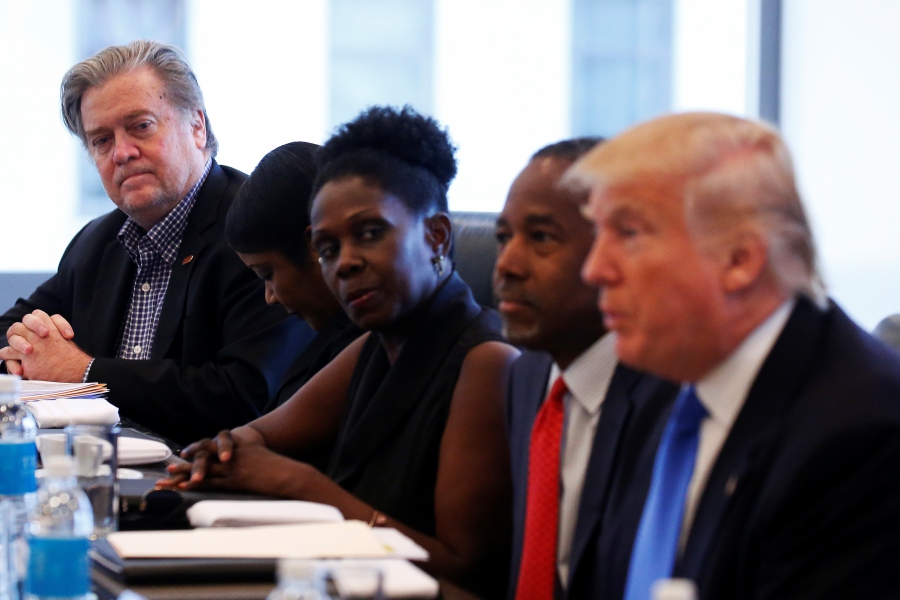 White nationalist Richard Spencer claims the term alt-right as his creation. He heads the National Policy Institute, which is described as "an independent organization dedicated to the heritage, identity, and future of people of European descent in the United States, and around the world."

Spencer does have specific white nationalist ideals — chiefly, the dream of a white ethno-state — and says everyone in the movement either agrees with him or will at some point.

But in practice the term "alt-right" has come to encompass a mishmash of people.

Breitbart poster-troll Milo Yiannopoulos says he doesn't consider himself a member of the alt-right, though he often speaks and writes about it. He co-authored an explainer about the movement on Breitbart's far-right website: "An Establishment Conservative's Guide to the Alt-Right." It's well worth a read. The piece breaks down the alt-right population into categories (such as "the intellectuals," "the meme team," "natural conservatives"), and combats accusations that the movement is purely based on racism.

The Breitbart piece classifies one type of alt-righter, the "1488er," as a member of the movement's truly racist faction, which it contends is small. "1488" is a neo-Nazi code to referring to the slogan "We Must Secure The Existence Of Our People And A Future For White Children" and "Heil Hitler." These are neo-Nazis.

But the largest swath of the alt-right, the Breitbart story says, are "natural conservatives" who are "mostly white, mostly male middle-American radicals, who are unapologetically embracing a new identity politics that prioritises the interests of their own demographic." These are white supremacists.

Spencer contends "white supremacist" is an offensive term and not at all what his movement is about.

"A white supremacist is someone who wants to rule over other races. You want to be supreme above them," he says. "That is not what I want and it's not what anyone in the alt-right wants."

Yet the words Spencer uses to describe his own views express a clear belief in white superiority.

At his NPI conference in Washington, DC last weekend, Spencer told the crowd white people are a "race of conquerors," and the United States is their "inheritance." (In an interview with The World, Spencer attributed his tone — and the Nazi salutes in the video below — to the crowd being in a "celebratory mood.")

After the NPI conference, Spencer appeared on TV One, where he remarked on the "genius" of white Europeans, and said that "white people don't ultimately need other races in order to succeed."

"I think that white people, Europeans, formed the core of American identity," he told Roland Martin. Later, he stated plainly: "I do not believe that everyone's equal."

"So you don't believe in multi-racial equality?" Martin asked.

"No. I don't think anyone does actually," Spencer answered.

Yiannopolous also contends that white supremacy is not what the alt-right's all about. At a talk in Houston, he said, "the left is obsessed by white supremacy, which in reality makes up an infinitesimally small number of people."

And he explained what he thought were the true catalysts for alt-right ideology.

"The first is a millennial generation that’s fed up with identity politics and its hypocrisies," he said. Being outside the political establishment is a unifying feeling for the alt-right, and presumably what its members would prefer media coverage to focus on — politically disenfranchised youth and their converted elders.

"The second is anti-white racism," he continued. "Ironically so-called white privilege is the privilege to be discriminated against."

Although most Americans who voted for Donald Trump may not consider themselves part of the alt-right movement, the University of Georgia's Mudde says they could still be aligned with the thinking.

"What this comes down to is not ideological racism," Mudde says. "This is about white Christian male privilege, and the problem with privilege is that you don’t see that it is privilege."

This election, 72 percent of white men without college degrees voted for Trump. Fifty-eight percent of Trump voters were classified as "Protestant or other Christian."

Spencer told the BBC in September that he cares about "my people [whites] more than other people," and that he wants to "expand white privilege and deepen it." In an interview with Reveal's Al Letson, he added his belief that "we live in a world of a white-guilt complex."

Mudde says people who benefit from white, male, Christian privilege "don’t understand that some of the things that they have, they have because of privilege."

And that's partly the fault of liberals, he adds.

"Mainstream liberals in America also don’t really challenge white privilege," Mudde says. "As a consequence white privilege is conceived as a conspiracy theory of the left."

'Anti-white racism' around the world 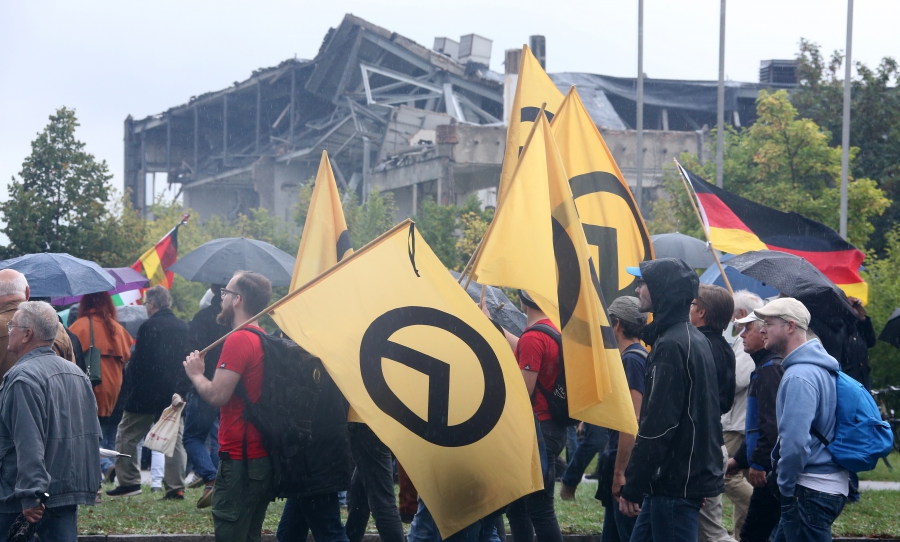 Mudde, who hails from the Netherlands and is also the author of "The Populist Radical Right: A Reader," says this feeling that whites are suffering "anti-white racism" is no new thing.

Indeed, that idea has flowed plenty in the US conservative mainstream. The problem of political correctness was a theme at the Republican National Convention in Cleveland this summer. It has been a talking point on Fox News for years.

Spencer draws inspiration from European identitarians, whom the Southern Poverty Law Center says "want regions and nations that are different from one another — but at the same time culturally and ethnically homogenous within their borders."

But Mudde says "identitarian" doesn't equal "alt-right," as much as the US movement may try to connect itself to the brand.

"[Identitarians] don’t have the same outright anti-Semitism and racial views [as the alt-right]," Mudde says. "They’re white supremacists, most of the people we call the alt-right."

"[Mudde] is basically trying to hold on to ethnoculture," he says. "And he's trying to take race out of it. And I don't think you can."

As an example, Spencer suggested that he has more in common with a white Australian than with a non-white Italian — in other words, that race is a more powerful identifier than ethnicity.

Andrew Marantz has been writing about the alt-right for the New Yorker, and points out that there are people in the movement who might not subscribe to every idea.

"[But] there are some who are openly white nationalist," he says, "who are interested in preserving European power and European-American power." That is Spencer's NPI mission statement — for people of European descent to prevail around the world.

Marantz says the movement in the US has been networking with similar groups in Europe — in the UK, the Netherlands and France.

Each country's white movement is different, he says, but there are commonalities: "A common thread is what they would call 'secure borders' and what a lot of people would call 'extreme nationalism' ... shutting down immigration, deporting people who are already in your country, painting immigrants as a violent threat."

These are also the areas where white movements' causes tend to merge with politics. The tweet below is by anti-Islam Dutch populist Geert Wilders, a political party leader who is facing charges of hate speech. He has lauded Trump on multiple occasions.

Florida and Utah for @realDonaldTrump

The people are taking their country back.

Is this really so alarming?

Mudde emphasizes that these movements have existed for a long time. He doesn't think they're necessarily more powerful or influential today.

"There's always been an international network of white supremacists," he says, "but those are really, really marginal groups. Mostly neo-Nazi groups. And they stilll exist, but there hasn't been a clear rise in them."

And even with the appointment of Breitbart's Stephen Bannon as Trump's chief strategist, Mudde's not convinced the so-called alt-right is sure to influence the White House.

But Lawrence Rosenthal of the Center for Right Wing Studies is certain of it.

"[Bannon] made his bones, as it were, by being kind of the hinge between the racialist alt-right and eventually the mainstream media. He was, in effect, an agent of getting the ideas from the alt-right first into things like Drudge Report, Fox News and then the greater mainstream media. And he was extremely effective at that."

"In general, what the alt-right represents, has been very much at the fringes or at the margins of American politics. Trump has, in effect, institutionalized it. [Bannon is] the first person who presumably Trump turns to to say, what's your advice on how I should handle 'blank.'"