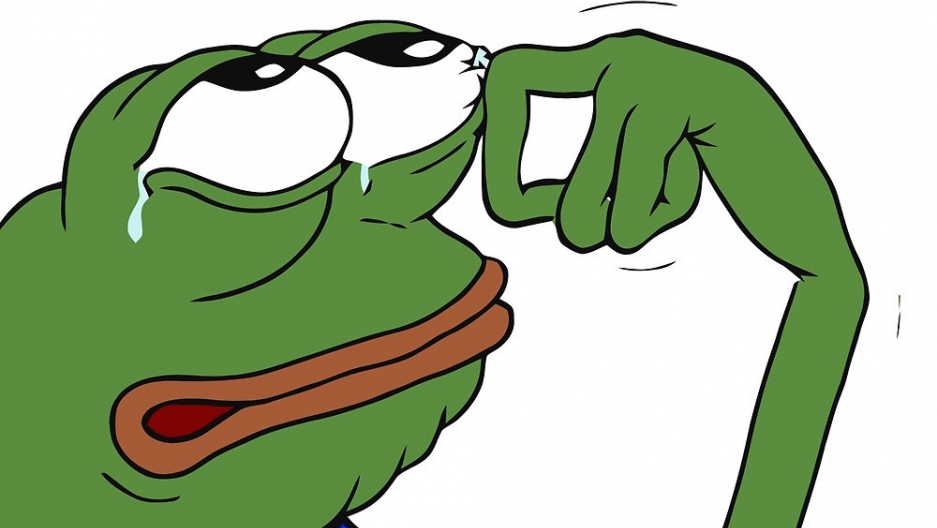 Once upon a time there was a harmless cartoon frog named Pepe. He first appeared in 2005 in the debut issue of Matt Furie's comic book series, "Boy's Club." Pepe was a stoner. He lived with three friends, played computer games and hung out in his underwear.

People loved Pepe the Frog. They shared him online, mixed and matched him, and made him say funny things, sad things, all types of things.

Pepe had become a meme.

But eventually, things turned ugly. The alt-right got ahold of Pepe. And they haven't let go.

Now, the Anti-Defamation League has gotten involved. Cartoon meme Pepe the Frog has been added to the ADL's list of hate symbols.

"What we've seen over the past several months is an increase in this particular meme of Pepe the Frog being used by white supremacists and bigots of all kinds," says Oren Segal, the director of the ADL's Center on Extremism. "Because of the volume of the hatred and the efforts to use it to harass people online, we felt it was time to add Pepe the Frog to our database."

Segal says the alt-right is doing more than just putting a Hitler mustache on Pepe the Frog or placing him in front of a concentration camp. They're using the memes against individuals. "Those images have tended to target Jews and maybe perceived Jews and others in an effort to intimidate and harass."

Furie, Pepe's creator, isn't pleased with the ADL's move. In an email he wrote: "I think it overlooks the fact that Pepe is a symbol used to express an extremely wide range of life-affirming and peaceful views by many people, and its swift inclusion into the database is an attempt to add legitimacy to Hillary Clinton's false claim that Pepe's image is "almost entirely co-opted by the white supremacists"."

"Pepe is not usually racist. He's a chill, sad frog that kids love. Pepe is love. The images of Pepe that are on the [ADL] website are OBVIOUSLY racist to anyone who seems them, there is no hidden agenda — it's just right there: a small group of anonymous idiots jerk off all day in their mom's basement and make sick, racist versions of Pepe because they are losers. The majority of Pepe memes are just cool stoned frog remixes. This whole thing is a waste of News. Let's talk about Ecology and the Future of Mankind."

The ADL's Segal says it's exactly because a meme can take thousands of different forms that the organization decided to add Pepe to its database.

"Instead of selecting the Pepe the Frog with the Hitler mustache or the Pepe the Frog standing in front of the burning World Trade Center, what we decided was to take the meme in its totality and say: there are still many uses of this meme that are not offensive, that are meant to be fun, that are used by people who have no ill intent whatsoever. But because of the volume and the amount of memes that we're seeing that do have this more hateful underpinning, we felt it was important to let people know that, that too, is happening."

Furie is upset about how the alt-right have used Pepe the Frog, and he has some advice for them: "The alt-right need to take mushrooms and realize we are all one. One love. Peace."

Segal, too, is confident the Pepe meme will outlast the alt-right. "Listen, I don't think this is the last chapter for Pepe the Frog. I think there is a possibility that he will be reclaimed, and that the positive uses of this meme will outweigh those negative ones. But for now, Pepe the Frog is being used and abused in ways that are just unacceptable."

Like any good meme, Pepe the Frog has reacted online to the ADL's decision. Most of those responses are too crude to print, but here are a few:

So the news says that Pepe the frog is a hate symbol how dumb is the news #PepeTheFrog #news #meme #pepelivesmatter pic.twitter.com/UcNzlGscMb

Furie remains kind of mad at the ADL. "At this moment, I feel the need to ask the ADL [to] make it clear that I, Matt Furie, in no way support this sh*t. Please take my name off the database, take Pepe off of the database, it's ironically defaming my copy-written intellectual property and affecting my livelihood as a working creative artist and peaceful hippy [sic]."