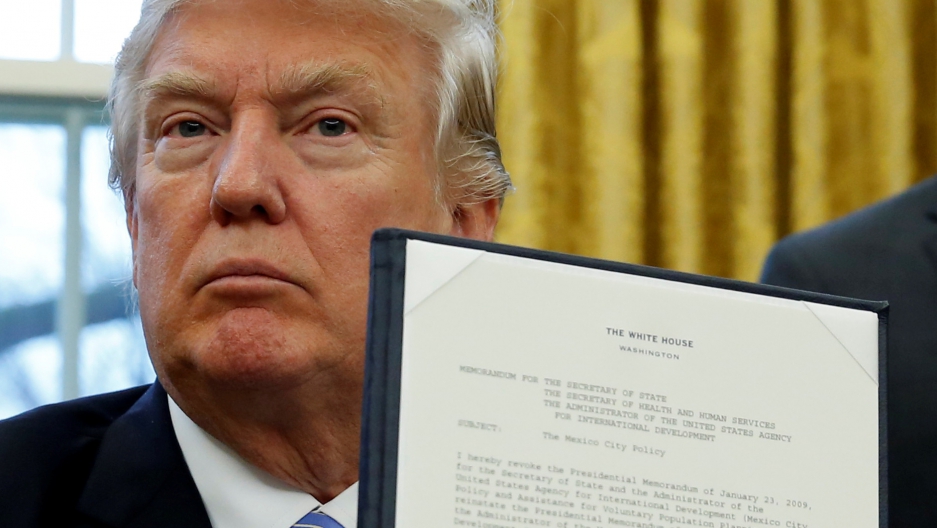 U.S. President Donald Trump holds up his executive order on the reinstatement of the Mexico City Policy.

One of Donald Trump's first acts as president was to restrict access to abortion.

On Monday, he reinstated the so-called "Mexico City Policy," which forbids the US from funding any group that provides or promotes abortion overseas. The policy dates back to the Reagan era, was repealed by President Bill Clinton, reinstated by President George W. Bush and rescinded once more by President Barack Obama — before being reinstated on Monday.

The government has always forbidden the use of funds from the US Agency for International Development to pay for abortions overseas, dating back to 1973, the year of the Roe v. Wade ruling. The Helms Amendment, named after Republican Sen. Jesse Helms, passed in the Senate and the House in summer 1973 and stated that no USAID money could go to funding abortions as a method of family planning.

In 1984, President Ronald Reagan took it a step further, with what is known as the Mexico City Policy — so named because of where it was announced by the then president. US aid cannot go to foreign clinics or groups that "actively promote abortion," regardless of whether they do it with money from non-US sources.

Given the actions by his Republican predecessors, it comes as no surprise that President Trump reinstated the policy so soon. But his version does promise to be more restrictive. His memo calls for extending the rule to "global health assistance furnished by all departments or agencies."

How much does this revised policy change funding? The US spends roughly $607 million globally for reproductive health — a portion of the roughly $1.3 billion spent on gender issues. The gender budget goes mostly toward promoting women's economic empowerment and job training, stopping violence, getting girls in school and stopping child marriages.

Many of the countries that receive funds already have their own positions on abortion — typically restrictive — and have considered it controversial that the US government would fund access to abortion in their country. However, activists have contended that every bit of assistance counts, and that many organizations abroad will be forced to give up funding.

Maaike van Min, strategy and development director of nonprofit reproductive health group Marie Stopes International, says her organization is one of many affected by the changes.

Van Min describes how the services her organization provides affect women’s lives on the ground.

“I remember one woman coming up to me and saying, ‘You can really make this stop,’” she recalls.

Confused, van Min asked her what she means by that.

The woman told her that she has had nine pregnancies so far and of those, seven were successful.

Van Min and her colleagues gave that woman an intrauterine device for birth control.

Van Min says in her experience, even religious leaders in conservative communities typically let Marie Stopes International do its work.

“The religious leader who sees the women in his area falling pregnant, suffering consequences of all these pregnancies that their bodies cannot deal with … they see that on an everyday level and they will never, never argue the morality question,” she says.

In the end, van Min says, “the further away you get from the woman, the more important the morality discussion becomes. Because she knows, she knows, what’s good for her.”

For those who support the Mexico City Policy, this is a victory. Arina Grossu, of conservative Christian group the Family Research Council, says the ban is necessary.

"There's no reason why we should be funding abortion anywhere. There are so many other nonprofit NGOs internationally that do amazing work in health care, humanitarian relief, and other areas. This money, the millions of dollars, would go to them instead."

It's a sentiment echoed by anti-abortion activists everywhere, who worry that any type of US involvement with terminating pregnancies abroad might be linked to the viewpoint that certain people are expendable. In an interview last year with NPR's Goats And Soda, Shawn Carney, president of 40 Days For Life, an international nonprofit that campaigns against abortion throughout South America and the world, said: "A First World country goes into a Third World country and says, 'We don't think you should have this many children, or children at all, because you're poor and you have diseases, and you don't have our lifestyle.'"

That concern is not unprecedented. Latin America is rife with instances in which forms of birth control were forced upon certain populations, for example the forced sterilization of poor indigenous Peruvian women, in the mid-1990s, in order to lower poverty rates.

The World's Shirin Jaafari and Sarah Birnbaum contributed to this story.