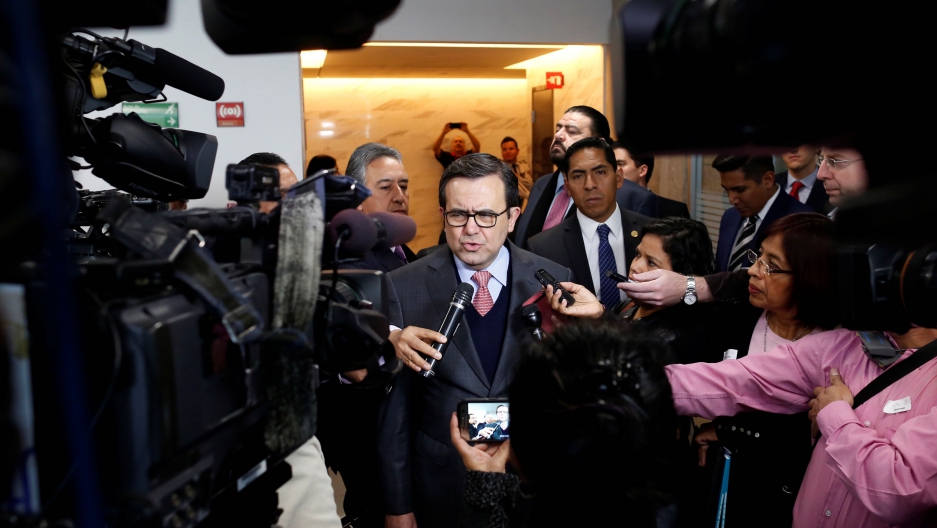 Mexico's Economy Secretary Ildefonso Guajardo Villarreal speaks to the media after a meeting with a Japanese businessman in Mexico City on Jan. 13, 2017.

Mexico drew red lines on Tuesday ahead of negotiations with US President Donald Trump's administration, warning it could quit the talks and a major trade pact if the discussions hit a wall.

During the US election campaign, Trump vowed to make Mexico pay for a massive border wall and threatened to finance it by tapping into the $25 billion in remittances that Mexican migrants sent back home last year.

"There are very clear red lines that must be drawn from the start," Economy Minister Ildefonso Guajardo told the Televisa network, while preparing to meet with US officials in Washington on Wednesday and Thursday.

Asked whether the Mexican delegation would walk away from the negotiating table if the wall and remittances are an issue, Guajardo said: "Absolutely."

Guajardo and Foreign Minister Luis Videgaray will hold the face-to-face talks with the new US administration ahead of a meeting between Trump and President Enrique Pena Nieto on Jan. 31.

In addition to the wall, Trump wants to renegotiate the North American Free Trade Agreement (NAFTA) with Mexico and Canada, warning last week that he would abandon the pact unless the United States gets "a fair deal."

The Mexican government has responded that it is willing to "modernize" the pact, which came into force in 1994 and represents $531 billion in annual bilateral trade between Mexico and the United States.

Some 80 percent of Mexico's exports go to the United States, a clear indicator of the country's dependence on the US market for its economic well-being.

But Guajardo warned on Tuesday that Mexico was also willing to exit the 23-year-old agreement.

"If we're going for something that is less than what we have now, it doesn't make sense to stay in," Guajardo said.

Pena Nieto vowed on Monday that there would be "neither confrontation nor submission" in the negotiations, which will include trade, immigration and other issues.

Luis de la Calle, a Mexican economist and one of the original NAFTA negotiators, said it is impossible to enter negotiations without being willing to walk away if necessary.

Trump "puts pressure in an almost extortionist manner... to get as many concessions as possible," de la Calle told AFP.

"But countries must be much smarter."

Videgeray said that while the United States has "great interest" in talking about trade, Mexico wants to "talk about every issue."

Pena Nieto has called on the Trump administration to do more to stop the illegal flow of weapons from the United States into Mexico, which Mexican officials blame for fueling a brutal drug war.

While it faces tough talks with the United States, the Mexican government is setting its eyes on new trade pacts with other countries.

After Trump withdrew the United States from the Trans-Pacific Partnership on Monday, Pena Nieto said his government would immediately seek to negotiate bilateral agreements with other TPP members to "diversify" his country's trade relations.

Guajardo noted that Mexico has good relations with China and said Beijing was a "big concern" for the Trump administration.

But Valeria Moy, director of the Mexico Como Vamos think tank, said Latin America's second-biggest economy cannot lose sight of the importance of the United States while it looks for deals elsewhere.

"If you have the world's biggest market next door to you, that's the market you need to take care of, period," Moy said. "What we can diversity is who we buy from."